A Practical Guide to Hawaiian Secession

The BBC reports this week that a secession movement in Hawaii continues to simmer under the surface:

An upcoming election has highlighted the deep disagreement between native Hawaiians over what the future should look like. For some, it's formal recognition of their community and a changed relationship within the US. Others want to leave the US entirely - or more accurately, want the US to leave Hawai'i.

Much of the antipathy to DC stems from the grievances of the indigenous population which is quite familiar of how wealthy white ranchers in the late 19th century overthrew the legitimate government of Hawaii and formed  a pro-US puppet government in its stead. Eventually, annexation followed.

Nevertheless, the fact that some Hawaiians want independence does not mean that most do. While it's true that whites are only 25 percent of the Hawaiian population, it's also true that indigenous Hawaiians and other pacific islander groups only comprise ten percent of Hawaii's population. The largest demographic group in Hawaii is Asian-Americans, who make up 38 percent of the population (not including people of mixed parentage.)

If the secessionists are ever to sell secession to the overall population, they would have to offer something more practical than solidarity with the indigenous population or appeals to local patriotism.

Potentially, the costs of secession could be high if the US decided to regard the Hawaiian government as a hostile regime (thus bringing economic sanctions), and of course, spending by the US government in Hawaii — funded by mainland taxpayers — is extensive.

Practically speaking, however, there is a lot of real estate between the current status quo for Hawaii and full-blown independence. It is unlikely that Hawaii would fully remove the US from the islands any time soon, no matter how unpopular the regime in DC became. It is likely that Washington would resort to military action before it would be willing to give up its military installations in and around Pearl Harbor. Look, for example, at how the US has held onto Guantanamo Bay, even when Cuba became aligned militarily with the Soviet Union.

However, there is no reason that that Hawaii could not reach a compromise with the US in which Hawaii obtains domestic autonomy while remaining a military ally and resource for the US. The world is full of such arrangement, and many countries have relationships with regions (many of which are islands and overseas territories) that use their own currency and have their own systems of government while remaining part of a larger political body.

It does not follow logically, of course, that Hawaii, even if it were to allow a US military presence, would have to use US currency or submit to US regulations of trade.

In fact, freedom from federally imposed restrictions on trade would be among the greatest benefits for Hawaiians in the case of independence. As Gary Galles noted here in Mises Daily, Hawaii, as part of the US's domestic market, is heavily restricted by the Jones Act. The Jones Act restricts the nature and extent of shipping that can take place in and out of American ports. Galles writes:

Jones Act costs are made clearest in Hawaii, Puerto Rico, and Alaska, where it most severely limits supply lines.

In 2014, shipping a forty-foot container from Los Angeles to Honolulu reportedly cost more than ten times shipping it to Singapore. Dependent on Jones Act shipped petroleum for three-quarters of its electricity generation, Hawaii’s electricity prices are almost double the next most expensive state.

A 2012 report found that sending a container of household goods from the east coast to Puerto Rico cost more than double that to nearby Santo Domingo. A GAO study found that some Puerto Rico companies had shifted sourcing from America to Canada, due to cost savings from escaping Jones Act restrictions.

Alaska is restricted from shipping oil by tanker to the lower forty-eight states or to Hawaii, due to Jones Act restrictions. The costs are so extensive that the state’s governor is mandated to use “all appropriate means to persuade the United States Congress to repeal those provisions of the Jones Act.”

(International trade is restricted by the Jones Act as well, although not in the same way as domestic shipping.)

Thanks in part to trade restrictions such as these, the cost of living in Hawaii is notoriously high. For example, in nominal terms, Hawaii has a rather high median income at $59,000.  (The US median is $58,000.) But when adjusted for cost of living, the median income in Hawaii plummets to $50,900.  This disparity is the nation's largest, although, New Jersey comes in just slightly behind Hawaii in this measure: 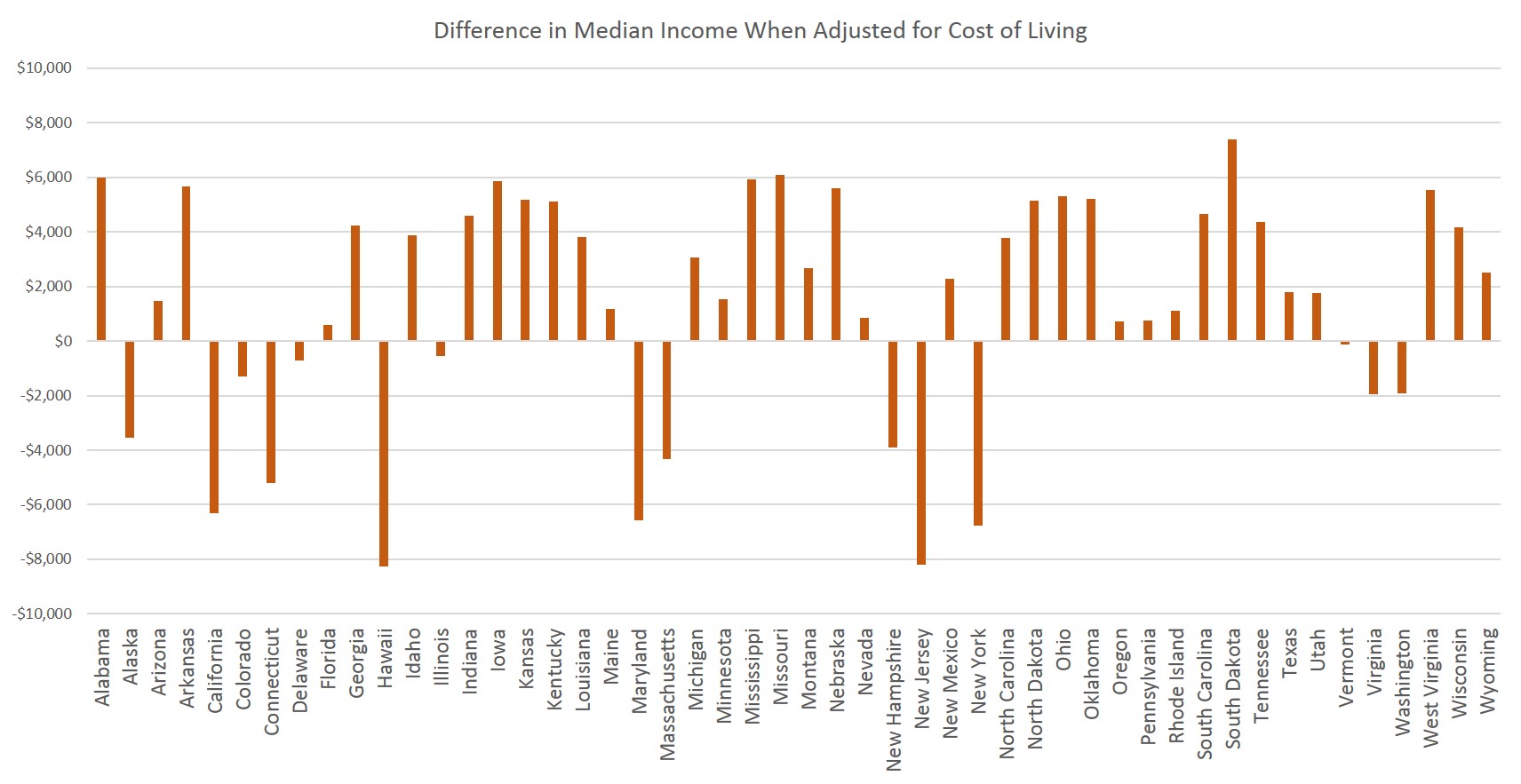 We can't blame all of this on federal law, of course, as Hawaii is a long way from other major shipping ports, but the fact remains that the Jones Act severely limits what can be shipped from the US mainland, and by whom, while international trade further is controlled by a Congress where only four people out of 535 are from Hawaii.

Thus, economic freedom for Hawaii would allow Hawaiians greater power to control tariffs and trade in a manner that benefited Hawaii rather than special interests far away on the mainland. (Naturally, I prefer unilateral free trade in this regard.) This isn't to say that some Hawaiians never benefit from US trade restrictions. International trade restrictions on sugar are a famous example. But for every pro-Hawaii government regulation, there are countless others that benefit far away interests much more.

The US cannot be faulted for all of Hawaii's inability to take advantage of its geographical advantages. As just one example, we might note that a majority of Hawaiians have long refused to allow gambling on the islands, even though such a move could turn the islands, or a subregion of them, into a Monaco of the Pacific where wealthy Asians and Americans would leave behind thousands of dollars in gambling losses with every trip.

The biggest obstacle to successful secession for the time being, however, is not ideological. As long as the federal money keeps coming in the form of social security checks, welfare checks, and military spending, its unlikely many will want to kill that golden goose. If those checks ever start bouncing, however, and if the feds start to scale back the fiat-money and taxpayer funded largesse, things will start to look very different.