When a psychology professor at the University of Toronto publicly rejected the forced use of a set of pronouns, it catapulted him into the news feeds and conversations of millions of people. Jordan Peterson’s enduring renown, however, has been sustained by the immense interest in what he has to say about the deepest questions.

His lectures on YouTube cover archetypal interpretations of the Bible, the meaning of life, human personality, and even five hours’ worth of dissecting Disney’s Pinocchio. Many of his lectures have hundreds of thousands of views, despite them being two and half hours of covering dense material quickly.

In his “Maps of Meaning” course, based on his book with the same title, he presents a framework for human action with many similarities to that of Mises and Rothbard. Peterson is not an economist, however, and so his framework includes some of the particulars of action that are outside the purely praxeological framework.

Peterson’s framework applies to small, quick actions like grabbing your car keys as you walk out the door but it is scalable to much bigger applications like making big life choices and the archetypal hero’s journey. No matter the scale, the way we go about interpreting and acting upon the world can be described like a map or a story: “I was in some undesired state or location and then I moved toward a desired state by making use of certain tools and overcoming certain obstacles on my way.” 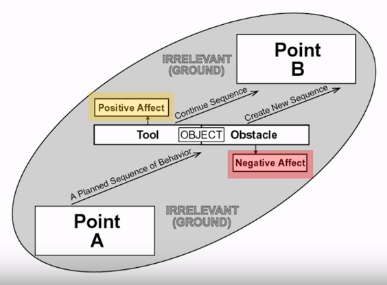 This desired state of affairs completely shapes the way we perceive the world on a neurological level. We train our attention on the things in our environment that would either help or hinder us on our way to attaining some end. The things that help are tools and the things that hinder are obstacles. Anything else is irrelevant, and we won’t focus our attention on it unless we have not yet decided that it is irrelevant.

He stresses that the most important aspect of decision-making is rendering things irrelevant. We become distracted and inefficient and frustrated when we struggle to ascertain what is a tool, what is an obstacle, and what is neither. An unpredicted and undesired outcome means that something that we had categorized as irrelevant has manifested itself as relevant. Peterson says we get anxious, angry, depressed, and frustrated when these events occur. 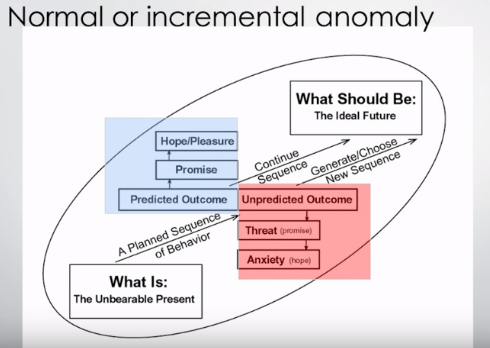 Sometimes the appearance of an unanticipated obstacle makes us question our whole perceptual and planning framework (or “map” or “story”). Peterson gives two examples:

(1) You are using your car (tool) to get from A to B, but on the way, somebody wrecks into you with their car causing yours to cease functioning. Your A-to-B plan has now exploded into a multi-stage ordeal that you may not even be able to deal with on your own.

(2) You are a university student who receives a lower-than-expected grade on a test. You might question whether you should be a student at all as a result.

Regarding the second scenario, Peterson recommends limiting the domain of affected “maps” to the smallest, most directly relevant level to avoid spiraling into depression after every negative outcome.

Peterson teaches that our value systems are nested, meaning that we pursue multiple ends with our actions simultaneously. And this is partially due to the fact that we exist and have relationships in nested environments. I have my own thoughts and values, but I exist in a household with my family, I participate in a network of friends, and these all take place in a broader culture.

Peterson uses an example of setting the table for dinner. A micro-level end is physically placing a fork on the table in the correct spot. One level up is creating a nice environment to have dinner. I might want to do this because I want to be a helpful member of my family, and I want to be that because that’s a part of being a good person. So, placing the fork on the table simultaneously satisfies multiple hierarchically-nested ends.

Here, then, is a short summary of Peterson’s action framework: We are all in a frame/map/story. It has a goal and a current position. Our perceptions are guided by our goal, which involves us categorizing items in the world as either a tool, an obstacle, or irrelevant to our purpose. Emotions come from these items or events that either move us along our way to our goal or keep us from progressing. Some undesirable outcomes can be fixed quickly, but others can be disastrous.

Comparison to the Praxeological Framework

There are many similarities between the action framework presented by Peterson and that of Mises and Rothbard. Things like emotions and other particulars don’t appear because they are irrelevant to the development of economic theory, which must be based on rock-solid, universal cause-and-effect. This is the source of their main differences, explored below along with the similarities.

Mises sets the boundaries between praxeology and psychology early in his treatise, Human Action: “The theme of psychology is the internal events that result or can result in a definite action. The theme of praxeology is action as such.”1 Peterson, a fan of the great psychoanalytic thinkers Freud and Jung, would be very interested in Mises’s subsequent discussion of psychoanalysis and the line between it and Mises’s praxeology.

Difference #1, Perception. For Mises and Rothbard, action is purposeful behavior. Humans use scarce means to attain their chosen ends. One requirement for action, therefore, is that we perceive a causal connection between the use of a means and the attainment of the end, but how perception happens is beyond the scope of economics.

With reference to any given act, the environment external to the individual may be divided into two parts: those elements which he believes he cannot control and must leave unchanged, and those which he can alter (or rather, thinks he can alter) to arrive at his ends. The former may be termed the general conditions of the action; the latter, the means used. Thus, the individual actor is faced with an environment that he would like to change in order to attain his ends.3

Difference #3, The Nature of Ends. According to Mises, “Praxeology is indifferent to the ultimate goals of action. Its findings are valid for all kinds of action irrespective of the ends aimed at.”5 Peterson, however, emphasizes the nested nature of ends, like the example above involving setting the dinner table.

Since the nature of ends is not a concern for economists, we see a variety of ways to articulate ends from Mises and Rothbard. Consider this example from Rothbard:

When we must use a means so that some ends remain unsatisfied, the necessity for a choice among ends arises. For example, Jones is engaged in watching a baseball game on television. He is faced with the choice of spending the next hour in: (a) continuing to watch the baseball game, (b) playing bridge, or (c) going for a drive.6

These ends are pretty specific. It’s clear that Rothbard is referring to the satisfaction Jones would have in each of these activities. Mises and Rothbard also use the terms “definite end” and “certain end” frequently.

But what about cases where pursuing one course of action comes with a complex variety of desirable and undesirable consequences and not some simple, easily articulated, and fleeting feeling of happiness? What if by continuing to watch the baseball game, Jones is trying to have something to talk about with his coworkers the next day, but his wife also wants him to complete a household chore instead so he risks her anger?

Here we must realize that what Mises and Rothbard really mean by “end” is the entire state of affairs chosen by the actor. Action involves swapping whole universes — a less preferred one for a preferred one.

Therefore, all action involves exchange — an exchange of one state of affairs, X, for Y, which the actor anticipates will be a more satisfactory one (and therefore higher on his value scale).7

“Acting man is eager to substitute a more satisfactory state of affairs for a less satisfactory.”8

Similarity #3, Demonstrated Preference. Perhaps the most interesting similarity between Peterson’s and Rothbard’s action frameworks is the idea that the actor’s values are made manifest in action. Rothbard called it demonstrated preference:

The concept of demonstrated preference is simply this: that actual choice reveals, or demonstrates, a man's preferences; that is, that his preferences are deducible from what he has chosen in action. Thus, if a man chooses to spend an hour at a concert rather than a movie, we deduce that the former was preferred, or ranked higher on his value scale. ... This concept of preference, rooted in real choices, forms the keystone of the logical structure of economic analysis.9

Compare Rothbard’s explanation of demonstrated preference to Peterson’s discussions of the relationship between action and value:

Action presupposes valuation, or its implicit or “unconscious” equivalent. To act is literally to manifest preference about one set of possibilities, contrasted with an infinite set of alternatives. If we wish to live, we must act. Acting, we value.10

Standards of better or worse are not illusory or unnecessary. If you hadn’t decided that what you are doing right now was better than the alternatives, you wouldn’t be doing it. The idea of a value-free choice is a contradiction in terms. Value judgments are a precondition for action. 11

Jordan Peterson is not famous for his action framework, but it is central to his Maps of Meaning book and university course. He uses it on his way to demonstrating the basis for belief systems and the superiority of a morality based on the inherent value of the individual.

The differences between his action framework and that of Mises and Rothbard may be attributed to the difference between psychology and economics. But the similarities are striking, even though, to my knowledge, Peterson has not read Mises or Rothbard.

Perhaps these similarities on such a fundamental level as human action reveal why Peterson, Mises, and Rothbard all fall into the classical-liberal category. Understanding that individuals (and only individuals) have the capacity to act to change the world in their favor and in mutually beneficial ways will lead to a dramatically different worldview than the belief that individuals are primarily intersections of group identities, locked in a class struggle, and victims of their circumstances.

Nickel: How Government Alchemists Turned a Base Money Hard and Now Are Expected to Kill It.

Nickel is a base metal the government used to replace silver. Since then, the government has inflated so much that even nickel is too valuable for US coinage.