For the past month, Bitcoin has reached a new all time high every week. On December 11, Bitcoin reached it’s all time high of over $17,000 per coin. Bitcoin witnessed an impressive 1600% increase in value during the past year. The cryptocurrency market increased from $18 billion in January 2017 to over $475 billion in December. Bitcoin is going through the process of monetization and the cryptocurrency market is being financialized. Cryptocurrency credit cards, automatic teller machines, exchanges, over-the-counter markets, bank accounts, insurance, derivatives, and trading algorithms are available. CBOE Bitcoin futures launched last Sunday, the CME is launching this Sunday, and NASDAQ is expected to join in early 2018. However, the prices are rising too far too fast. Every asset class has ups and downs. If cryptocurrencies are really a new asset class, they must come down at some point.

The Role of the Overall Economy

As discussed in this report, the prices in many asset classes are at their highest levels and the volatility of equities is on a record low. However, the fundamental problems that caused the 2008 crises have not been solved.

Ronald Stöferle has noted, “although financial markets seem to be all right at the moment, we consider the current situation to be an ‘uneasy calm.’” The financial system continues to be fragile, i.e. because of over-indebtedness, which is a result of the monetary policy interventions in recent years. The value of cryptocurrencies is highly dependent on the state of the global financial and monetary system. 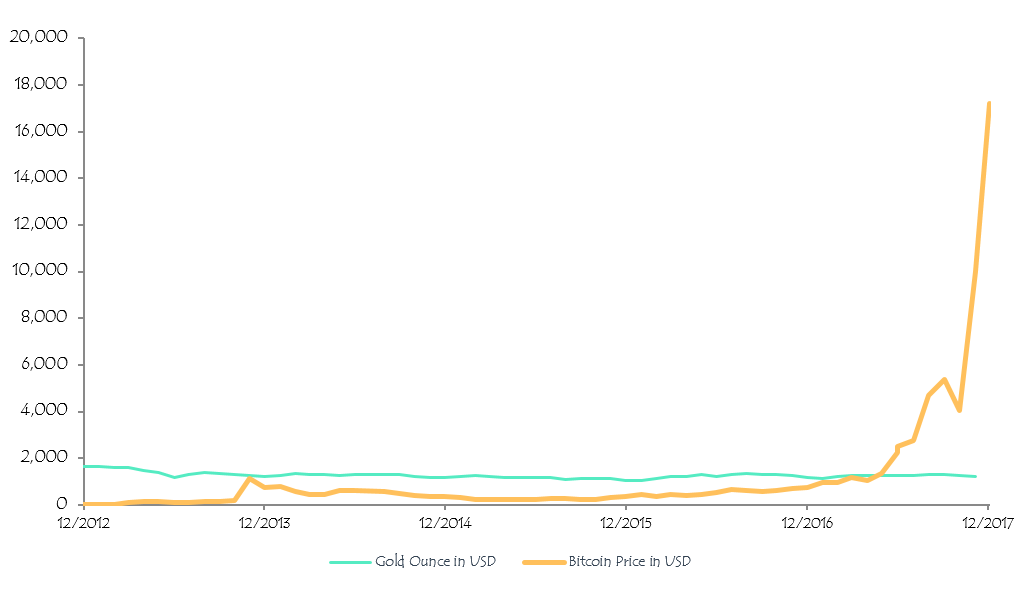 Furthermore, the Bitcoin network relies on the Internet and on cryptographic encryption techniques that have only existed for a few decades. In addition to technological risks, Bitcoin has technological limits as well. The Bitcoin network has reached its full capacity. The network can process approximately 7 transactions per second or 350,000 per day. To ensure a transaction is confirmed quickly, the sender must pay a high transaction fee to miners. A transaction with a high fee is given priority on the network because miners form mining pools and compete against each other to earn transaction fees and freshly minted bitcoins. Due to the increasing demand to send Bitcoin transactions and the limited supply of space in each block, transaction costs increased from 0.40 Swiss francs (CHF) in early 2017 to over 8 CHF in December. Transaction confirmation times also increased. Originally, transactions took 10 minutes to be confirmed on the network. Now transactions take several hours to be confirmed. Unsatisfied demand for a global payment system is overflowing into alternative cryptocurrencies like IOTA, Dash, and Ethereum. Bitcoin hard forks such as Classic, Gold, and the cancelled Segwit2X also garnered attention by investors captured by the Hayekian dream of privately competing currencies.

Over 1000 different cryptocurrencies exist; however, the majority of them likely have value solely because of Bitcoin’s hype and will not be around in five years from now. In a recent report for cryptoresearch.report, I presented a classification system of cryptocurrencies. Based on the technological limits of the cryptocurrency, the system has three main classes:

Bitcoin, Litecoin, Dash, and Bitcoin Cash are part of the money class because these digital tokens compete with fiat currencies such as the U.S. dollar, euro, and renminbi. They offers fast, private, and “permissionless” payments.

Cryptocurrencies such as Ethereum, Lisk, and IOTA are infrastructure coins because they provide users with a platform for smart contracts in addition to sending payments. For example, marriage contracts, cosmetology licenses, and seal of approval certificates can be issued and publicly stored on the Ethereum network.

Cryptocurrencies such as eSports.com’s Reward Token (ERT) and the Spectre.AI (SXS) fall under the general purpose category because they are not designed to send payments or host smart contracts. Instead, they represent digital shares in the company that investors can trade online. General purpose cryptocurrencies are challenging venture capital and traditional stock markets. Some of the latest cryptocurrencies even offer dividends and standard investor rights. Offering cryptographic units that represent shares in a company may disrupt venture capital and stock markets in 2018.

Carl Menger’s theory of subjective valuation explains why some individuals use infrastructure tokens as a medium of exchange or store of value and others use money tokens as a platform for transferring data or smart contracts. The taxonomy does not describe why different cryptocurrencies have value but rather the division of labor or specialization of different cryptocurrencies based on their technological features. For example, Bitcoin is a very simple protocol that does not allow functions such as creating and issuing new cryptographic tokens. Additional layers of protocols can be built on top of the Bitcoin protocol; however, Ethereum is a better platform for issuing new cryptographic tokens and hosting complex smart contracts because these contracts can be executed directly on the Ethereum blockchain. Similarly, Ethereum can be used as a store of value; however, the Ethereum protocol’s complexity makes it vulnerable to attacks. The 2016 Decentralized Autonomous Organization (DAO) hack, and the 2017 multi-signature parity hack resulted in over $100 million dollars being lost. Therefore many investors consider Bitcoin to be a better store of value than Ethereum.

Demelza Hays is a doctorate student in the Department of Economics at the University of Liechtenstein in Europe. Prior to attending the University of Liechtenstein, Demelza completed her Master's in Economics at the Toulouse School of Economics in Southern France. As a Summer Fellow at the Mises Institute, she investigated if cryptocurrency is compatible with fractional reserve banking.

"Infrastructure" Is Now Anything the Government Wants To Do

Just as SJWs redefined justice as "social justice"—with big implications for how we view true justice—politicians are redefining infrastructure to justify even more government intervention in daily life.

The world's regimes have long been devoted to regulating every aspect of "health" in accordance with what central planners want. The covid panic offered them an opportunity to greatly expand these powers.

The deficit for the year is pushing $2 trillion. And we still have five months to go until the end of the fiscal year. Only during World War II were the deficits so huge in relation to GDP. Meanwhile, the Fed continues to print money to buy more Federal debt.

By mid March—when barely 12 percent of the population had been vaccinated—total excess mortality was back within 1 percent of 2019 levels. In other words, the number of deaths in the US is collapsing back to where it was before the official start of the pandemic.

3 Ways the Tech Oligarchs' New Subsidy Is Ripping You Off

When it comes to the oligarchs' new semiconductor subsidy scheme, the real cost in terms of economic distortions, lost welfare, and harm to competitors, is quite real and beyond the dollar amounts we see in the subsidy itself.

Demelza Hays is a doctorate student in the Department of Economics at the University of...