GET NEWS AND ARTICLES IN YOUR INBOXPrint
A
A
Home | Mises Library | Yellen: "GDP is a Pretty Noisy Indicator" 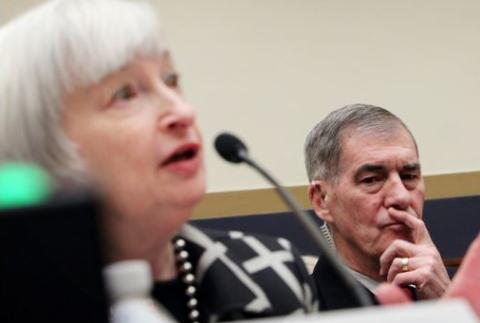 As much as the Fed pretends it is data dependent, in actuality they do what they want and use the data to justify their actions. Or, in the case of GDP, they shoo it away as if it doesn't matter. We always hear how important GDP is as a summary of the economy's health (the Austrian view is that the GDP is quite overrated). But when the narrative is that "it's all good!" the Professional Monetary Bureaucrats can't let a lousy GDP number get in the way.

Just before the FOMC's announcement, the Atlanta Fed's forecast put the Q1 GDP number below 1%. When asked about it during her press conference, Yellen simply stated that "GDP is a pretty noisy indicator."

Of course, regardless of the actual GDP headline, the economy's fundamentals are never on the right track if the "growth" is built on the artificial expansion of the money supply. But as much weight as economists and other academics place on this precious statistic, it's wholly amusing when it doesn't really matter if it contradicts the official story.

Despite the low GDP forecast, Yellen said that she expected 2017 to result in a 2 percent average GDP overall. Even this is hilarious, if she's bragging about it. The WSJ writes that this "new stage of monetary policy [raising rates] is being driven by a central bank now more focused on the possibility that the economy could outperform forecasts." Well, one might suppose that if your forecasts are in the gutter, outperforming them is indeed possible. Two percent GDP itself, if one is to use GDP as a measure of economic flourishing, is hardly something to be proud of.

What we need, of course, is a complete repudiation of this entire dilemma of rate hikes vs. no rate hikes. The Fed has been an abject failure. Interest rates, like money itself, should be set and discovered via the market process.