Yellen To Congress: We'll do Something Someday | Mises Institute
Skip to main content

GET NEWS AND ARTICLES IN YOUR INBOXPrint
A
A
Home | Mises Library | Yellen To Congress: We'll do Something Someday

Yellen To Congress: We'll do Something Someday 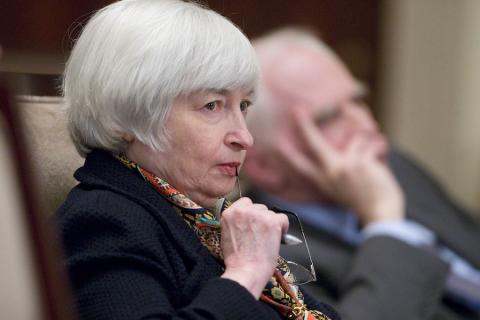 On Yellen's Humphrey-Hawkins testimony, the Reuter's headline says it best: "Fed on course to raise interest rates at an upcoming meeting." Translation: Fed continues on path to do something someday.

Her time before Congress was a continuation of Yellen's unique ability to say absolutely nothing while pretending that she's got everything under control. There was no further information on the overrated Fed Funds rate hike issue — overrated because it is both meaningless and a distraction to the real problems at hand. We cannot emphasize Joe Salerno's point strongly enough:

The targeted variable and its targeted level are not important per se. It is the increase of bank reserves and the resulting expansion of the money supply when banks loan these reserves out that artificially reduces market interest rates and misleads entrepreneurs and capitalists into investment decisions that result in malinvestment and overconsumption. These inflation-fueled malinvestments result in bubbles in real estate, commodity, and financial markets and a distortion of the real structure of production that invariably culminate in financial crises, unemployment and recession or depression.

The Fed and the feebleminded financial press are obsessed with interest rate talk and ignore the elephant in the economy: malinvestment and the destruction of capital.

But of course, it's not just the lack of new information on a meaningless rate increase; it's also the convoluted and contradictory approach of "Fed Speak." On one hand, we get this: "As I noted on previous occasions, waiting too long to remove accommodation would be unwise." As if upping the Fed Funds target another 25 basis points (.25%) is "removing accomodation." On the other hand, however, she was eager to emphasize how "gradual" rate hikes would be.

Being worried about waiting too long and bending over backward to stress how slowly "rates" would rise hardly communicates knowledgeable resolve. Instead, it reinforces the increasingly obvious idea that the Fed has no clue what it is doing and it is merely buying time; trying to save face and save bureaucratic positions in Washington.

Regarding the balance sheet issue, the WSJ reports that "the Fed has no plans to use the balance sheet as an 'active tool of monetary policy management.'" By this, she clearly means what has been obvious to anyone paying attention: the Fed is afraid to reverse its absurd monetary policy of soaking up massive amounts of Federal debt. There's little desire to sell its holdings because no one wants to prick the bubble.

On interest rates, the balance sheet, Dodd-Frank repeal, and fiscal policy, Yellen's testimony is best summed up as: "I'm not sure, we'll just have to see." In this light, Yellen has been entirely consistent, unsurprising. She's always employed convoluted FedSpeak to communicate nothing of substance.