GET NEWS AND ARTICLES IN YOUR INBOXPrint
A
A
Home | Mises Library | Why Mises (and not Hayek)?

Why Mises (and not Hayek)? 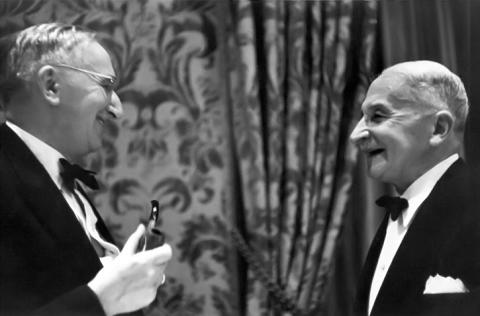 Let me begin with a quote from an article that my old friend Ralph Raico wrote some 15 years ago:

Ludwig von Mises and F. A. Hayek are widely considered the most eminent classical liberal thinkers of this century. They are also the two best known Austrian economists. They were great scholars and great men. I was lucky to have them both as my teachers.… Yet it is clear that the world treats them very differently. Mises was denied the Nobel Prize for economics, which Hayek won the year after Mises's death. Hayek is occasionally anthologized and read in college courses, when a spokesman for free enterprise absolutely cannot be avoided; Mises is virtually unknown in American academia. Even among organizations that support the free market in a general way, it is Hayek who is honored and invoked, while Mises is ignored or pushed into the background.

I want to speculate — and present a thesis — why this is so and explain why I — and I take it most of us here — take a very different view. Why I (and presumably you) are Misesians and not Hayekians.

My thesis is that Hayek's greater prominence has little if anything to do with his economics. There is little difference in Mises's and Hayek's economics. Indeed, most economic ideas associated with Hayek were originated by Mises, and this fact alone would make Mises rank far above Hayek as an economist. But most of today's professed Hayekians are not trained economists. Few have actually read the books that are responsible for Hayek's initial fame as an economist, i.e., his Monetary Theory and the Trade Cycle and his Prices and Production. And I venture the guess that there exist no more than 10 people alive today who have studied, from cover to cover, his Pure Theory of Capital.

Rather, what explains Hayek's greater prominence is Hayek's work, mostly in the second half of his professional life, in the field of political philosophy — and here, in this field, the difference between Hayek and Mises is striking indeed.

My thesis is essentially the same one also advanced by my friend Ralph Raico: Hayek is not a classical liberal at all, or a "Radikalliberaler" as the NZZ, as usual clueless, has just recently referred to him. Hayek is actually a moderate social democrat, and since we live in the age of social democracy, this makes him a "respectable" and "responsible" scholar. Hayek, as you may recall, dedicated his Road to Serfdom to "the socialists in all parties." And the socialists in all parties now pay him back in using Hayek to present themselves as "liberals."

Now to the proof, and I rely for this mostly on the Constitution of Liberty, and his three volume Law, Legislation, and Liberty which are generally regarded as Hayek's most important contributions to the field of political theory.

According to Hayek, government is "necessary" to fulfill the following tasks: not merely for "law enforcement" and "defense against external enemies" but "in an advanced society government ought to use its power of raising funds by taxation to provide a number of services which for various reasons cannot be provided, or cannot be provided adequately, by the market." (Because at all times an infinite number of goods and services exist that the market does not provide, Hayek hands government a blank check.)

Among these goods and services are

protection against violence, epidemics, or such natural forces as floods and avalanches, but also many of the amenities which make life in modern cities tolerable, most roads … the provision of standards of measure, and of many kinds of information ranging from land registers, maps and statistics to the certification of the quality of some goods or services offered in the market.

Additional government functions include "the assurance of a certain minimum income for everyone"; government should "distribute its expenditure over time in such a manner that it will step in when private investment flags"; it should finance schools and research as well as enforce "building regulations, pure food laws, the certification of certain professions, the restrictions on the sale of certain dangerous goods (such as arms, explosives, poisons and drugs), as well as some safety and health regulations for the processes of production; and the provision of such public institutions as theaters, sports grounds, etc."; and it should make use of the power of "eminent domain" to enhance the "public good."

Moreover, it generally holds that "there is some reason to believe that with the increase in general wealth and of the density of population, the share of all needs that can be satisfied only by collective action will continue to grow."

Further, government should implement an extensive system of compulsory insurance ("coercion intended to forestall greater coercion"), public, subsidized housing is a possible government task, and likewise "city planning" and "zoning" are considered appropriate government functions — provided that "the sum of the gains exceed the sum of the losses." And lastly, "the provision of amenities of or opportunities for recreation, or the preservation of natural beauty or of historical sites or scientific interest … Natural parks, nature-reservations, etc." are legitimate government tasks.

In addition, Hayek insists we recognize that it is irrelevant how big government is or if and how fast it grows. What alone is important is that government actions fulfill certain formal requirements. "It is the character rather than the volume of government activity that is important." Taxes as such and the absolute height of taxation are not a problem for Hayek. Taxes — and likewise compulsory military service — lose their character as coercive measures,

if they are at least predictable and are enforced irrespective of how the individual would otherwise employ his energies; this deprives them largely of the evil nature of coercion. If the known necessity of paying a certain amount of taxes becomes the basis of all my plans, if a period of military service is a foreseeable part of my career, then I can follow a general plan of life of my own making and am as independent of the will of another person as men have learned to be in society.

But please, it must be a proportional tax and general military service!

I could go on and on, citing Hayek's muddled and contradictory definitions of freedom and coercion, but that shall suffice to make my point. I am simply asking: what socialist and what green could have any difficulties with all this? Following Hayek, they can all proudly call themselves liberals.

In distinct contrast, how refreshingly clear — and very different — is Mises! For him, the definition of liberalism can be condensed into a single term: private property. The state, for Mises, is legalized force, and its only function is to defend life and property by beating antisocial elements into submission. As for the rest, government is "the employment of armed men, of policemen, gendarmes, soldiers, prison guards, and hangmen. The essential feature of government is the enforcement of its decrees by beating, killing, and imprisonment. Those who are asking for more government interference are asking ultimately for more compulsion and less freedom."

Moreover (and this is for those who have not read much of Mises but invariably pipe up, "but even Mises is not an anarchist"), certainly the younger Mises allows for unlimited secession, down to the level of the individual, if one comes to the conclusion that government is not doing what it is supposed to do: to protect life and property. And the older Mises never repudiated this position. Mises, then, as my own intellectual master, Murray Rothbard, noted, is a laissez-faire radical: an extremist.