GET NEWS AND ARTICLES IN YOUR INBOXPrint
A
A
Home | Mises Library | Who Owns the North Pole? 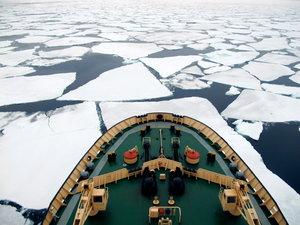 The battle for the North Pole is snowballing between national governments along the Arctic Circle, as they all have their eyes set on the vast natural resources residing in the Arctic region. Indeed, it’s estimated the Arctic Ocean floor contains 22 percent of all unused oil and natural gas in the world — the largest remaining untapped concentration.

From this year until 2017, the US will hold the chair of the Arctic Council (AC) — an international forum founded in 1996, comprised of member states Canada, Denmark, Finland, Iceland, Norway, Russia, Sweden and the US.The purpose of the AC is to

“provide a means for cooperation, coordination, and interaction among the Arctic States … [and] Arctic Indigenous communities … [for addressing] issues of sustainable development and environmental protection …”

It will be interesting to see, given recent antagonisms between the US and Russia, how aggressively the AC chair will be wielded and for what purposes. The US government has been receiving criticism for not expressing greater interest in the Arctic — Hillary Clinton in 2011 was the first US secretary of state to attend an AC meeting — but everyone knows a flip-flop is in order the moment Washington perceives a political gain to be had.

Meanwhile, the Russian Federation has been ramping up their propaganda machine with President Vladimir Putin being photographed in a submarine in the Baltic Sea, coinciding with announcing the reopening of old USSR Arctic military bases. During their Arktika 2007 expedition, they executed a PR stunt and planted a Russian flag on the sea bed of the North Pole in order to show symbolically that it’s theirs.

To complicate matters, Denmark petitioned the United Nations last year, calling dibs on 900,000 sq km — an area twenty times the size of Denmark itself! Canada too has been in the propaganda fray since their prime minister declared that Santa Claus is a Canadian citizen.

In fact, every member of the AC is clamoring for ownership of the Arctic, and even some non-member observers are taking a shot.

The Legal Basis for State Control of the Arctic

These claims are based on the United Nations 1982 Law of the Sea Treaty, which set new guidelines for delineating borders on the high seas, with particular relevance to the natural resources beneath. The treaty established the notion of an Exclusive Economic Zone (EEZ), areas over which a state is granted sole rights for exploring, mining, etc. EEZs extend 200 nautical miles off a nation’s coast.

The treaty also formally established the notion of continental-shelf-rights, which allow states whose “borders” extend via continental shelves beyond their EEZ, to claim this distance as well (note: this legalistic definition differs drastically from the geological one). Thus these conflicts are the result of overlapping EEZs. However, if a state can show that this disputed area adjoins their coastal baseline, then they may be able to overrule another state’s EEZ.

Despite former US President Harry Truman being the first to invoke the notion of continental-shelf-rights, the US still hasn’t ratified the Law of the Sea Treaty. It’s the only AC state government, and one of the only governments in the world, that has yet to do so.

Can Rothbard’s Ethics of Private Property Be a Guide?

With such widely conflicting, even outlandish claims, a rational system of property rights is required to settle the debate. After all, why should any of these states — which themselves have little to no presence in much of the Arctic — have more of a right to the Arctic frontier than private explorers, industrialists, or natives?

A systematic theory of human-property rights was laid out by Murray Rothbard, in his 1982 classic, The Ethics of Liberty. The ideas set forth in this seminal book shed insight into the Arctic conflict, and really all property disputes that one may encounter.

Rothbard begins by asserting the truth of self-ownership, the idea that everyone has a property right in their own person, and thus a natural right to liberty, by virtue of each individual’s ownership over his own physical, bodily faculties. This control cannot be severed for as long as the person is alive, and the ownership of each person over him or herself is thus inalienable.

Rothbard then proceeds to show how property rights in land or in physical goods follow logically from property rights in one’s own body. The seventeenth-century Enlightenment philosopher John Locke is usually seen as the first to defend this principle of homesteading, which states that by “mixing one’s labor with the soil” — by using and transforming an unowned resource — the object in question becomes the just property of this person, the first user.

These ideas are echoed constantly in colloquial speech, with common phrases like “finders keepers” or “first come, first served.”

Of course everyone owns his or her own body, and common sense suggests that the first person to settle an uninhabited piece of land is the rightful owner of it. Moreover, as Rothbard argues, to deny these ideas is to argue that some people should be allowed to control others (slavery) or that it’s okay to divvy up someone else’s belongings for oneself and one’s friends (robbery).

So then who, if anyone, has homesteaded the Arctic and who are the would-be-usurpers? Except for the areas where there are inhabitants, only a tiny region of the Arctic Ocean and its continental shelf regions have been developed or settled. So, the legal claims being made by various states in the Arctic are not based on any economic realities or any real-world homesteading. That is, many states claim control of the region, but almost nowhere is this being done at the request of true owners. Without this key economic step — according to Rothbard — it is impossible to make a legitimate and moral claim to the Arctic.

The ethics of liberty provides a map for assessing all of these claims to Arctic territory, but we find little regard for sound ideas of ownership in the region.

How does the homesteading model compare to governmental claims to the Arctic? Well, the state of Denmark isn’t using the 900,000 sq km of Arctic Ocean, or the unexplored, untapped land below it, so surely they have no right to it. The same goes for Russia, Finland, Sweden, or the US. None of them have any reasonable claim to any of it beyond a few tiny areas.

Complicating the matter is the fact that in many coastal areas, there are already indigenous people living in the Arctic, who are using this territory, and who do have claims to it that ought to be respected — without a state proclaiming sovereign-ownership over them.

There have been numerous instances of indigenous peoples, such as the Sami, being forced to pay taxes to multiple governments, despite their declarations of independence. Then there was the High Arctic Relocation of the 1950s (a “solution” to the so-called “Eskimo-problem”), where the Canadian government forcibly relocated Inuit families to the high Arctic in order to use them as “human flagpoles” on disputed territory.

Unfortunately, history shows that governments are almost always more concerned, not with respecting property rights, but with finding fresh people and territory to control by the use of military force: in their eyes, might trumps right.

So whereas the natural law as explained by Rothbard provides a rational basis for peacefully and justly solving all types of property disputes, the governments’ raison d’état for Arctic expansionism is merely that he who holds the biggest guns deserves the loot.

Oppression of Arctic natives, unrecognized rights of explorers and industrialists, even armed conflict between Arctic states — these are the only alternatives to the ethics of liberty; and so long as Rothbard’s arguments are ignored, these are the inevitable outcomes to be expected. This is the twenty-first century after all, so perhaps it’s time to try something new, instead of the worn out, irrational political justifications of the past.