GET NEWS AND ARTICLES IN YOUR INBOXPrint
A
A
Home | Mises Library | What is the Condition of U.S. Savings?

What is the Condition of U.S. Savings? 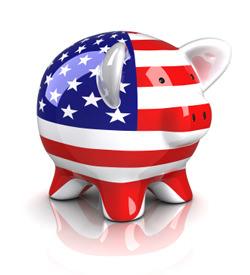 According to the National Income and Product Accounts (NIPA), the saving rate is established as the ratio of personal saving to disposable income. Disposable income is defined as the summation of all personal money income, less tax and non-tax money payments to the government. Personal income includes wages and salaries, transfer payments, income from interest and dividends, and rental income.

But is it valid to add all incomes in an economy in order to establish the so-called "national income?" Does the summation of money incomes equate with the true national income? Let us explore this point.

Why Government Data on Saving is Misleading

The eight loaves are the savings of the baker, which were transferred to the toolmaker in return for the tools. Or, we can say that the baker has invested the eight loaves of bread. The tools, in turn, will assist at some point in the future to expand the production of bread. These tools, however, have nothing to do with the current stock of bread.

While the producers of final consumer goods determine the present flow of savings, other producers could have a say with respect to the use of real savings. For instance, the toolmaker can decide to consume only six loaves of bread and use the other two loaves to purchase some materials from material producers.

This additional exchange, however, will not alter the fact that the total income is still ten loaves of bread and the total savings are still eight loaves. These eight loaves support the toolmaker (six loaves) and the producer of materials (two loaves). Note that the decision of the toolmaker to allocate the two loaves of bread towards the purchase of materials is likely to have a positive contribution toward the production of future consumer goods.

The introduction of money will not alter what we have said. For instance, the baker exchanges his eight saved loaves of bread for eight dollars (under the assumption that the price of a loaf of bread is one dollar).

Note once more that the tools the toolmaker sold to the baker didn't make any contribution toward the present income — that is, the production of the present ten loaves of bread. Likewise, there is no contribution to the total present income if the toolmaker exchanges two dollars for the materials of some other producer. All that we have here is another transfer of money to the producer of materials.

Obviously, then, counting the amount of dollars received by intermediary producers as part of the total national income provides a misleading picture as far as total income is concerned.

Yet this if precisely what the NIPA framework does. Consequently, savings data as calculated by the NIPA is highly questionable.

The NIPA Follows the Keynesian Model

The NIPA framework is based on the Keynesian view that spending by one individual becomes part of the earnings of another individual. Each payment transaction thus has two aspects: the spending of the purchaser is the income of the seller. From this it follows that spending equals income.

So, if people maintain their spending, they keep income levels from falling. And this is why consumer spending is viewed as the motor of an economy.

The total amount of money spent is driven by increases in the supply of money. The more money that is created out of thin air, the more of it will be spent — and therefore, the greater the NIPA's national income will measure (see Figure 2). Thus, an increase in the money supply on account of central bank policies and fractional-reserve banking makes the entire calculation of the total income even more questionable.

Since this money was created out of thin air, it is not backed by any real goods; income in terms of dollars cannot reflect the true income. In fact, the more a central bank pumps additional money into the economy, the more damage is inflicted on the real income. As a result, money income rises while real income shrinks.

Do People Save Money?

Is it true that individuals are saving a portion of their money income? Do people save money?

Out of a given money income, an individual can do the following: he can exchange part of the money for consumer goods; he can invest; he can lend out the money (i.e., transfer his money to another party in return for interest); he can also keep some of the money (i.e., exercise a demand for money).

At no stage, however, do individuals actually save money.

In its capacity as the medium of exchange, money facilitates the flow of real savings. The baker can now exchange his saved bread for money and then exchange the money for final or intermediary goods and services.

What is commonly called "saving" is nothing more than exercising demand for the medium of exchange (i.e., money). This means that people don't actually save money but rather exercise demand for it. And, when an individual likewise exchanges his real savings for money, he in fact only increases demand for money. The money he receives is not income; it is a medium of exchange that enables the individual to secure goods. In the absence of final consumer goods, all of the money in the world would be of little help to anyone.

Consider the so-called helicopter money case: the Fed sends every individual a check for one thousand dollars. According to the NIPA accounting, this would be classified as a tremendous increase in personal income. It is commonly held that, for a given consumption expenditure, this would also increase personal savings.

However, we maintain that this has nothing to do with real income and thus with saving. The new money didn't increase total real income.

From this, we can also infer that the policies aimed at boosting consumer spending do not produce real economic growth, but in fact weaken the bottom line of the economy.

In the NIPA framework, which is designed according to Keynesian economics, the more money people spend, all else being equal, the greater total income will be. Conversely, the less money is spent (which is labeled as savings), the lower the income is going to be. This means that savings is bad news for an economy.

We have, however, seen that it is precisely real savings that pays — i.e., that which supports the production of real wealth. Hence, the greater the real savings in an economy, the more are the activities that can be supported.

What keeps the real economic growth going, then, is not merely more money, but wealth generators — those who invest a part of their wealth in the expansion and the maintenance of the production structure. It is this that permits the increase in the production of consumer goods, which in turn makes it possible to increase the consumption of these goods.

Only out of a greater production can more be consumed.

Can the State of Savings be Quantified?

What matters for economic growth is the amount of total real savings. However, it is not possible to quantify this total.

To calculate a total, several data sets must be added together. This requires that the data sets have some unit in common. There is no unit of measurement common to refrigerators, cars, and shirts that makes it possible to derive a unified "total output."

The statisticians' technique of employing total monetary expenditure adjusted for prices simply won't do. Why not? To answer this, we must ask: what is a price? A price is the amount of money asked per unit of a given good.

Suppose two transactions were conducted. In the first transaction, one TV set is exchanged for $1,000. In the second transaction, one shirt is exchanged for $40. The price, or the rate of exchange, in the first transaction is $1,000 per TV set. The price in the second transaction is $40 per shirt. In order to calculate the average price, we must add these two ratios and divide them by 2. However, it is conceptually meaningless to add $1,000 per TV set to $40 per shirt. The thought experiment fails.

Rather than attempting the impossible, as far as calculating real savings is concerned, one should instead focus on the factors that undermine real savings. We suggest that the key damaging factors are central bank's and government's loose monetary and fiscal policies.

The US economy has been subjected to massive monetary pumping since early 1980 via the introduction of financial deregulations. The ratio of our monetary measure AMS to its trend jumped from 1.17 in January 1980 to 3.5 in July 2009. (The trend values were calculated by a regression model, which was estimated for the period 1959 to 1979, the period prior the onset of financial deregulations).

Likewise, the US economy was subjected to massive government spending. For the fiscal year 2009, US federal government outlays are expected to stand at $3.5 trillion.

The ever-expanding government outlays are also depicted by the federal debt, which stands at $11.6 trillion thus far into 2009. Against the background of massive monetary pumping and ever expanding government, we suggest that this raises the likelihood that the pool of real savings could be in serious trouble.

We can conclude that, given prolonged reckless fiscal and monetary policies, there is a growing likelihood that the pool of real savings is in trouble. If our assessment is valid, this means that US real economy is likely to struggle in the quarters ahead.

According to latest US government data, the personal saving rate jumped to 4.6% in June this year after settling at 0.4% in June last year. We suggest that on account of an erroneous methodology, the so-called "saving rate" that the government presents has nothing to do with true savings.

Since early 1980s, the ever-rising money supply and government outlays have severely undermined the process of real savings formation. As a result, it will not surprise us if the US pool of real savings is in serious trouble. If what we are saying is valid then it will be very hard for the US economy to grow, for it is a growing pool of real savings that makes economic growth possible.