Vienna before the Austrian School 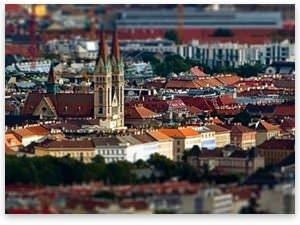 Sometime during the late summer months of 1859 — we do not know precisely when — a fatherless, 19-year-old youth from Biala/Bielitz on the Galician-Silesian border set off for Vienna with a Maturitätszeugnis1 from Krakow Gymnasium2 in his luggage, and perhaps a letter of recommendation or two from a teacher or relative as well. He was one of many from the so-called crown lands pouring into the incessantly growing "Royal-Imperial Capital and Residential City"3 of Vienna.

During the 19th century the population grew sevenfold. Vienna became a metropolis, the fourth largest city in the world after London, Paris, and New York. It was not until 1871 that Berlin edged ahead, leaving Vienna to occupy fifth place for a long time.

To our traveler, Carl Menger von Wolfensgrün (1840–1921), the subsequent founder of the Austrian School of economics, the cityscape still appeared as that of "old Vienna": enclosed on three sides by a city wall and moat, and naturally confined by an arm of the Danube on its eastern side. The city outskirts, the "Glacis," had never been built upon for military reasons. Partly lined with avenues of trees, it served the inhabitants as an esplanade with plots for market stalls, coffee tents, playgrounds, and junk dealers, and offered artisans and traders open storage and work areas. Within the city walls the number of houses (1,200), households (10,600), and inhabitants (about 50,000) had remained virtually constant for decades. Immigrants settled in the outer boroughs and suburbs (cf. Buchmann 2006, pp. 47–48 and 65).

"What struck young people from the provinces as particularly pleasant," a fellow student of Carl Menger remembered, "was the hospitality of the local people most of all" (Przibram 1910, vol. 1: p. 64). The same was later even registered in a well-known encyclopedia: "The main characteristics of the Viennese are mirth and bonhomie. The archetypal Viennese has an open heart and feels most content when he can be gentle and good. No matter how uproarious, public amusements are always harmless and jovial. In no large city will one feel more at home than in Vienna, and a stranger receives easy access into society" (Meyers Konversations-Lexikon 1888–1891, vol. 16: p. 607, headword "Vienna").

The razing of the city walls, commissioned in 1857 by Emperor Franz Josef I, was already under way at the time of Menger's arrival. Soon-to-be-apparent changes and upcoming plans still to be realized resulted in animated discussions, even heated arguments: "Every week brought a new surprise; first here and then there, some favorite spot of the old Viennese vanished. The columns of daily newspapers were filled with 'cries of anguish'" (Przibram 1910, vol. 1: p. 64).

By contrast, the younger generation of citizens, inspired by the belief in progress and filled with confidence, saw the dawn of a new beginning in the demolition of the stronghold ring (cf. Leisching and Kann 1978, pp. 38–39). Johann Strauss the Younger (1825–1899) lent the events of the time lively expression in his rhythmically jocund "Demolierpolka"4 and his martial "Explosions-Polka."5

In any case, "the enjoyment of theatre life and the desire for sensation that permeated public life appeared satisfied. The goings-on in front of and behind the scenes provided fodder for conversation in all circles. The few daily papers published in Vienna fed the reader with gossip from the theatre" (Przibram 1910, vol. 1: p. 9). As a culmination of this constructional redevelopment, the Ringstrasse,6 a magnificent boulevard of more than three miles would at last be ceremoniously opened on May 1, 1865. 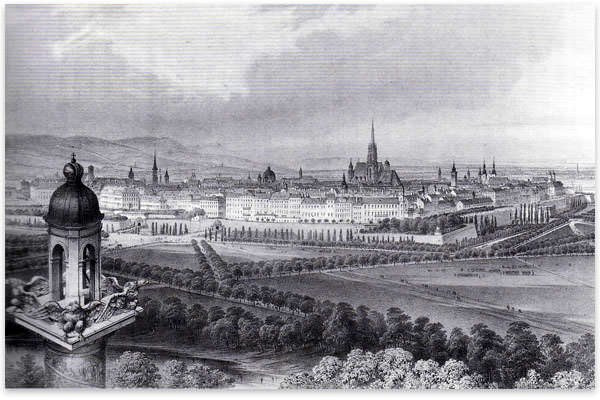 But the theater-merry façade could hardly cover up the fact that the general economic situation, as a result of the ruined state of government finances, was difficult. The 163 million guilders needed for constructing public buildings and grounds were financed by the partial selling of the newly available building areas to private companies, entrepreneurs, and investors (cf. Buchmann 2006, p. 67). A positive economic climate was created only after two exceptionally good harvests, and upon the added stimulation, albeit illusory and superficial, of the 1866 war against Prussia's being financed by an increase in the money supply.

The size of the railway network — a reliable economic indicator of the time — almost doubled between 1866 and 1873 (cf. Sandgruber 1995/2005, p. 245), and between 1867 and 1873 no less than 104 construction companies were newly licensed (cf. Matis 1972, p. 195) in Vienna alone. The city quickly turned into a gigantic construction site. In place of two-story houses, approximately 500 private and public buildings as well as 90 new roads and squares were constructed (Maderthaner 2006, p. 198) in a matter of a few years. Added to that were the Viennese mountain-spring-water main, the Danube flood control, three railway stations, and a considerable number of buildings in the surrounding towns and suburbs built in order to accommodate the enormous influx of immigrants, at least in part (ibid., p. 189). 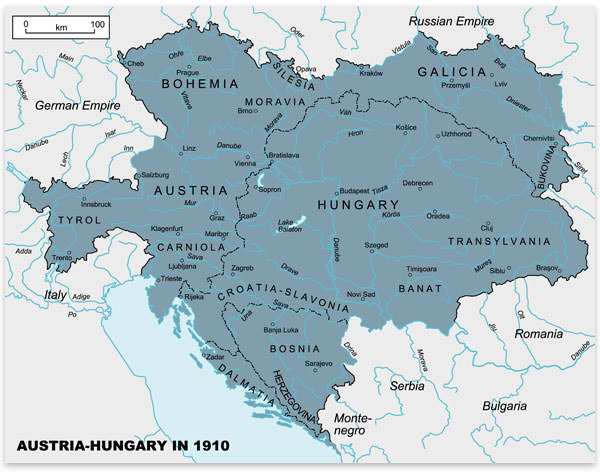 The monumental architecture of the Ringstrasse was a strong expression of the citizens' new self-confidence. Among the eligible voters of Vienna, hardly making up more than four percent of the inhabitants (in 1870 it was 26,069 people; cf. Czeike 1962, p. 17), a liberal attitude became the predominant political trend. This mindset came to expression in the December Constitution of 1867, in which the relationship of citizen and state was codified, and a catalog of basic, individual freedoms and rights, still valid to this day, was laid down. The freedom of speech, freedom of the press, freedom of religion and faith, freedom of assembly, and academic freedom were followed in 1868 by an extension of compulsory school attendance for children and a very controversial secularization of the school system.

When Emperor Franz Josef, lobbied by the business and society elites, authorized the holding of a world exhibition in 1873, already-excessive economic expectations were further fired up. The Viennese were hoping for the "jingle of golden rain" (Felder 1964, p. 337): "Everyone is counting on, everyone is speculating on the world exhibition," wrote economist August Oncken (1844–1911), who was then appointed to the faculty of the Universität für Bodenkultur (literally "University of Soil Culture"; today, the University of Natural Resources and Life Sciences).

Another contemporary also made plain the euphoric mood: "Around the year 1870 we were living rather in dulce jubilee. … To be sure, one shook one's head at the audaciousness of the project, … but one thought the boom would last and one plunged right into it" (cited in Premsel 1985, p. 65). On an area larger than 16 hectares, 200 exhibition halls for more than 50,000 exhibits were built, three new bridges were erected across the Danube Canal and the first luxury hotels of Vienna were constructed for an expected 20 million visitors (ibid., pp. 64–67).

Individuals, who had only shortly before had to content themselves with some modest job, suddenly, on account of some successful venture, came into a fortune and also took pains to make this change in their position as conspicuous as possible. … The whole of social life of the old imperial city was turned upside down. The previous humble coziness was replaced with a sometimes quite pompous and imposing extravagance. (Przibram 1910, vol. 1: p. 361)

The fact that seasoned bankers had long since recognized the dangers and had gradually withdrawn from activities on the stock exchange did not make much difference. Experts and economists warned emphatically in public speeches against the "stock-market swindle" and the "corruption of the press." But it was virtually impossible to put a stop to the unchecked gambling and speculating according to the motto "Es stirbt der Fuchs, so gilt der Balg"7 (cf. Schäffle 1905, vol. 1: pp. 158–160). Johann Strauss the Younger aptly reflected this precarious mood in his operetta, Die Fledermaus (1874): "Illusion makes us happy."

In the end, the opening of the World Exhibition on May 1, 1873, became the overture to the inevitable admission of complete failure: the exhibition halls were not yet completed, the weather was changeable, and the numbers of visitors remained below expectations. Many business aspirations shattered abruptly against reality. A little over a week later, the Viennese stock exchange recorded 110 insolvencies, and on the next day, "Black Friday," the "Great Crash," ensued with 120 additional companies collapsing (cf. Sandgruber 1985, p. 70; Matis 1972, pp. 260–265).

By the end of the year, 48 banks, 8 insurance companies, 2 railroad companies, and 59 industrial firms had gone into liquidation or had even gone bankrupt. On the stock exchange, 1.5 billion guilders, four times the complete government revenue of the Austro-Hungarian monarchy in 1872 (Matis 1972, pp. 55, 277), were blotted out. Many families fell on hard times and 152 people in Vienna committed suicide (cf. Premsel 1985, p. 67).

The "Great Crash," whose devastating effects would live on in the memory of Viennese citizens for a very long time, resulted in a kind of watershed in the general mentality (cf. Plener 1911, p. 386). In the years that followed, liberalism increasingly lost political support: "Pursuing security became the new guiding light. Risk aversion, a rent-seeking mentality, and a guilds and small-trades way of thinking became long-lamented, basic components" (Sandgruber 1995/2005, p. 250).

The immediate effects were the renationalization of the railroad industries, protectionism, and restrictions of economic freedom. The Austrian tendency toward bureaucratic paternalism and the desire on the part of economic interest groups to be shielded and protected acted in concert and close agreement. The "Great Crash" was thus the birth of the public "welfare apparatus," in which the old Josefinian spirit of the authoritarian state again raised its head. From 1870 to 1914, the number of public servants in Cisleithania grew from 80,000 to 400,000 (cf. Schimetschek 1984, p. 213). In Vienna, the number of municipal servants increased between 1873 and 1900 from 2,000 to 30,000 (cf. Maderthaner 2006, p. 229).

The political and intellectual climate in 20th-century Austria — ranging from a conservative-Catholic tradition to an Austrorevolutionary attitude, be it socialist, communist, or national-socialist — would have preferred to have let it be forgotten that the short phase of liberalism had created lasting material and spiritual values: an economic catching-up process and modernizing boost, an urbanity with cultural openness, as well as principles for a constitutional state with modern basic and individual rights.

Ultimately the development of individuality in the liberal era created precisely that tension-filled polarity of tradition and avant-garde, faith in progress and pessimism, and love of life and yearning for death that was to become fertile soil for Viennese art, literature, music, and science at the end of the 19th century.

This article is excerpted from The Austrian School of Economics: A History of Its Ideas, Ambassadors, and Institutions (2011). An MP3 audio file of this article, narrated by Paul Strikwerda, is available for download.