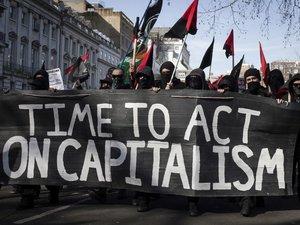 Anti-market and pro-socialist rhetoric is surging in headlines (see also here, here, and here) and popping up more and more on social media feeds. Much of the time, these opponents of markets can’t tell the difference between state-sponsored organizations like the International Monetary Fund and actual markets. But, that doesn’t matter because the articles and memes are often populist and vaguely worded — intentionally framed in such a way to easily deflect uninformed attacks and honest descriptions of what they are actually saying. In the end, they can all be boiled down to one message: socialism works and is better than capitalism.

While most of it comes from the Left, the Right is not innocent, since the Right appears to be primarily concerned with promoting its own version of populism, which apparently does not involve a defense of markets. “Build bigger walls at the border,” for example, is not a sufficient response to “All profits are evil!”

Instead of stooping to this level or simply resorting to “Read Mises!” (a more fitting response), we must show, yet again, that socialism — even under well-meaning political leaders — is impossible and leads to disastrous consequences.

The Necessity of Profits, Prices, and Entrepreneurs

Socialism is the collective ownership (i.e., a state monopoly) of the means of production. It calls for the abolition of private ownership of factors of production. Wages and profits are two parts of the same pie, and socialism says the profit slice should be zero.

The inherent theoretical problems of socialism all emanate from its definition, and not the particulars of its application. However, the supporters of socialism define “collective,” as no exchange of the factors of production. And without exchange, there can be no prices, and without prices there is no way to measure the costs of production.

In an unhampered market economy, the prices of the factors of production are determined by their aid in producing things that consumers want. They tend to earn their marginal product, and because every laborer has some comparative advantage, there is a slice of pie for everybody.

If technological changes make certain factors more productive, or if education and training makes a laborer more productive, their prices or wages may be bid up to their new, higher marginal product. An entrepreneur would not like to hire or buy any factor at a price that exceeds its marginal product because the entrepreneur would then incur losses.

Entrepreneurial losses are more important than many realize. They aren’t just hits to the entrepreneur’s bottom line. Losses show that on the market, the resources used to produce something were more highly valued than what they were producing. Losses show that wealth has been destroyed.

Profits give the opposite signal. They represent economic growth and wealth creation. A profitable line of production is one in which the stuff that goes into producing some consumer good costs less than what consumers are willing to pay for the consumer good.

As such, profits and losses are more than just important incentives, or cover in a conspiratorial capitalist class system; they are the only way to know that wealth is being created instead of destroyed in any line of production.

Under socialism, there is a single owner that does not bid factors away from some lines of production and toward others. Nobody is able to say, with any shred of certainty, that a particular tool or machine or factory could be used to produce something else in a more effective way. Nobody knows what to produce or how much to produce. It’s economic chaos.

Without Markets, We Can’t Know What or How to Produce

Laborers are put to work in areas where they don’t have a comparative advantage. Farmers are sent to factories, and tailors are sent to the mines. Workers are in the wrong lines of production and have the wrong tools. Every morning, the economy looks like Robert Murphy’s capital rearranging gnomes just ransacked it.

The Polish film Brunet Will Call lampooned situations like this throughout the movie, with consumer and capital goods in the most unlikely places. A butcher pulls an automobile’s clutch cable out of his freezer, and gives it to the main character, who pays for it with information on the whereabouts of a double buggy for someone’s newborn twins (at the flower shop, obviously).

So the failure of socialism is not conditional on the culture, time, or place of the victims. Socialism is flawed at its core: the “collective” ownership of the means of production. As such, there is no way to enact a functioning, growth-inducing version of socialism anywhere. In practice, however, the theoretical problems of socialism give way to civil unrest, which is met with state force and results in a death toll higher than any official war ever fought.

Without profit motives to produce, quotas must be put in place. With quotas, even in the cases where workers don’t lie about their production, chaos still reigns. For example, if a nail production quota is based on the number of nails, workers produce a lot of tiny, unusable nails. A nail quota based on weight would encourage workers to produce massive, but still unusable nails — a situation lampooned by this cartoon in Krokodil during the 1960s.

Endless queues stretched across the USSR, filled with people looking for shoes even though shoe production in the USSR exceeded that of the US. The problem was all the shoes were too small, because shoe production was measured by number, with no regard for the sizes or designs consumers demand.

The Wake of Socialism

Some cases are funny; others are not. About seven million people died of starvation in the USSR just in 1932–33 (middle-of-the-road estimate based on manipulated data). The authors of The Black Book of Communism (1999) estimate the deaths of close to 100 million people are attributable to communist and socialist regimes. That’s more than 200 times the number of US deaths in WWII (and a case could be made that their deaths are attributable to socialism, too).

Even today, in Cuba, the average wage is about $20 a month. In North Korea civilians are routinely rounded up by the dozens for public execution for the crime of watching South Korean TV smuggled into the country.

When people are hungry and unhappy, the state cannot survive if the people know others are better off. The state uses propaganda, misinformation, and censorship to make an already captive citizenry even more confused and submissive.

So count me surprised to hear fresh calls for socialism in 2015 — if the strong economic calculation argument and astronomical death toll haven’t turned the Left off of socialism, I don’t know what will. The idea is both bankrupt and deadly in both theory and practice.