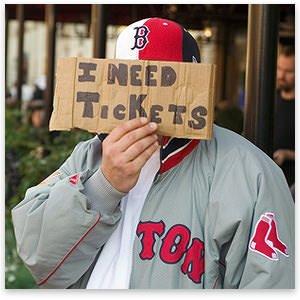 "The scalper provides a type of scheduling insurance."

Dozens of people among the throngs of jubilant fans hold crudely made cardboard signs featuring the words "I Need Tickets." Strangely, these people who, to an outsider, appear to be in desperate need of tickets for the big game, hold numerous tickets high above their head so everyone can see. These people are the noble ticket scalpers.

The United States does not have a federal prohibition on ticket scalping, but many states and even more municipalities have restrictions or outright prohibitions. This is very unfortunate for everyone attending events in such areas because the ticket scalpers are real public servants. The laws, to the degree that they are enforced, are actually responsible for the majority of the unfavorable things attributed to the practice of scalping.

Scalpers provide a myriad of services and benefits to a surprisingly large, and seemingly disconnected, group of individuals, businesses, and organizations. Surely, they deserve praise rather than scorn and persecution.

One of the first beneficiaries of the Scalper's services are the athletic organizations themselves. This may seem surprising, since many event organizers go to great lengths to discourage fans from purchasing from scalpers. Scalpers enable the teams to presell tickets much more effectively. This is because scalpers are willing to purchase tickets in advance in the hope of being able to hold them for some period, and then resell them for a profit.

In contrast, many people are unsure, at the time of presale, if they will be able to take off from work or other obligations. This uncertainty leads people to abstain from purchasing until they are certain they will be able to attend. Thus, the ticket scalper enables the team to get their money earlier through ticket presales.

Scalpers absorb the time risk associated with events. They absorb the risk associated with scheduling issues (i.e., whether or not fans can attend). They also absorb the risk that unfavorable events could occur. Anyone who has ever bought or sold a ticket knows that ticket resale values drop dramatically after a team has a few losses on its record. If the team does well, the scalper can make a nice profit; if the team does poorly, he can suffer a huge loss.

This opportunity for profit is good for fans because it ensures that tickets will be made available should the team do unexpectedly well. It is good for the team because it will be able to presell tickets even for bad seasons. The more the local law enforcement cracks down on scalpers, the greater the reduction in these positive externalities.

If the season-ticket holder find himself or herself in a financial tight spot, he or she is able to recoup some or all of his or her ticket cost by selling to a scalper. These factors can increase the consumer's willingness to purchase season tickets. This is a major benefit to the team because season tickets often sell at quite a premium as compared to general admission tickets. It is difficult to see how prohibition of this act helps anyone; it certainly does not help the season-ticket holder or the team.

Event goers benefit from the high level of convenience provided by the scalper. This convenience takes the form of easy accessibility. Attendees are not forced to plan as much and are able to show up at an event, spur of the moment, and purchase a ticket. This is a major benefit for those who are unable or unwilling to commit themselves to inflexible plans.

Even local workers and businesses benefit from the scalper's actions. People who do not have tickets often travel to the city hosting the game in the hopes of purchasing a ticket from a scalper once there. If the fan is unable to find a ticket at a price she or he deems reasonable, the chances are very good the individual will still visit local dining establishments and businesses before leaving town. Thus, restaurant workers get more tips, and businesses have higher sales than they would without the expectation of last-minute ticket availability. By banning scalping, local governments are effectively stealing this additional income from the community.

Clearly, scalpers provide vast benefits for entire communities. Unfortunately, the often-illegal nature of their work reduces the benefits to be had. As with any prohibited good or service, there is always a risk premium associated with its illegal provision. Buyers are forced to compensate the scalper for undertaking the legal risk associated with providing this harmless service. The legal risk also creates an artificial barrier to entry. There are many citizens who would like to share in the profits to be had from ticket resale but who are unwilling to skirt the law. Thus there are fewer competitors in the market, and those willing to resell are able to earn higher profits.

The prohibited nature of the service also adds to the consumer's searching costs. In areas where scalping is prohibited, there exists no reliable location in which those desiring tickets can obtain them. There can be no ticket store. Since scalpers cannot open a shop, those desiring tickets must spend time and energy searching the area for clandestine scalpers. The inability to advertise greatly increases the search cost.

This is why clever scalpers hold up signs stating they need tickets while, at the same time, holding tickets high in the air as a signal of their desire to sell tickets. They are forced to advertise the opposite of what they are doing. While those who frequent games quickly learn to decipher this curious signal, many people unsuccessfully search for tickets, ignoring the very people they seek because they do not understand the cryptic message. Obviously, this headache is unnecessary.

Scalpers are hidden heroes at events. They take personal, financial, and legal risk in order to provide a critical service in the hopes of earning a profit from their labors. Many of the aspects of scalping that people decry are, in reality, a direct product of the prohibition placed on the service. The prohibition raises prices, reduces supply, and limits competition. In addition, in the absence of the prohibition of scalping, buyers would have legal recourse against unethical scalpers who sell counterfeit tickets.

Scalpers bravely defy ill-conceived laws. In doing so, they provide a service to the communities in which they operate. Though it is probably not their intention, they serve as warriors for the free market. They fight against the notion that people must be protected from free, uncoerced exchanges. The scalpers are as critical to a successful event as the food vendors, the gatekeepers, and the janitors. They should be afforded the same legal rights as everyone else.