GET NEWS AND ARTICLES IN YOUR INBOXPrint
A
A
Home | Mises Library | For Society To Thrive, The Rich Must Be Left Alone

For Society To Thrive, The Rich Must Be Left Alone 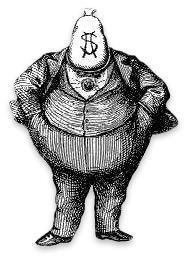 He describes the situation as one of "a rising oligarchy" and says, "[i]t suggests that the growth of inequality may have as much to do with power relations as it does with market forces." Krugman does not explain what he means by "power relations" beyond implying that economic inequality in and of itself is their cause. "There's an arrow of causation," he says, "that runs from diverging income trends to Jack Abramoff and the K Street project [a project designed to enmesh Republican politicians and lobbyists]."

The essential thing to understand here about Krugman is that he is a Keynesian. And as Mises observed, "The essence of Keynesianism is its complete failure to conceive the role that saving and capital accumulation play in the improvement of economic conditions." This failure is present in Krugman's hostility to economic inequality.

Krugman and all other enemies of economic inequality conceive of wealth and income strictly in terms of consumers' goods. As they see matters, a wealthier, higher-income individual simply has more goods and services that he personally can enjoy than does the average person. This view is reflected in the typical depiction of capitalists as fat men, whose plates are overflowing with superfluous food, while struggling wage earners starve. The alleged solution is to take from the surplus of the capitalists and make good the deficiency of the wage earners.

The truth, which real economists, from Adam Smith to Mises, have elaborated, is that in a market economy, the wealth of the rich — of the capitalists — is overwhelmingly invested in means of production, that is, in factories, machinery and equipment, farms, mines, stores, and the like. This wealth, this capital, produces the goods which the average person buys, and as more of it is accumulated and raises the productivity of labor higher and higher, brings about a progressively larger and ever more improved supply of goods for the average person to buy.

Thus, for example, because the automobile companies have numerous modern and efficient automobile factories, there is a production of automobiles sufficient for almost every family in the United States to own one. Because Exxon-Mobil and other oil companies own oil wells, pipelines, and refineries, there is gasoline and heating oil for the average American to buy. (And if the wealth of these companies were greater, and if its use in developing sources of supply were not blocked again and again by those who value the wildness of nature above the welfare of people, there would be a larger and more affordable supply of gasoline and heating oil to buy.)

Thus, in a market economy, people have a two-sided benefit from the capital owned by others. The capital of others is the source of the supply of the goods they buy and the source of the demand for the labor they sell. And the greater is that capital, the greater is this two-sided benefit to everyone. To the extent that the supply of goods produced is greater, prices are lower. And to the extent that the demand for labor is greater, wages are higher. Lower prices and higher wages: that is the effect of capital accumulation.

An essential prerequisite of capital accumulation is saving. What is saved out of income is added to capital.

To the extent that our economy is still free, all this is undoubtedly true of the high incomes Krugman complains about. They are the incomes of the great innovators of our time, such as Bill Gates, Michael Dell, Steve Jobs, and Sam Walton — the men whose efforts have transformed important parts of our economic system and who could not have done it had they not been free to earn and then save and invest extraordinarily high incomes.

The essential point here is that the economic inequality that results from economic freedom is to the material self-interest of everyone. It is the foundation of rising real wages and a rising standard of living.

Some part of the answer may be that the increase in the degree of economic inequality is only a matter of appearance, not reality. The lower income tax rates of the last generation may well have resulted in the reporting of substantial high incomes that were previously concealed by means of various methods of tax avoidance.

But let's put that aside and proceed to a more substantial answer. This is an answer suggested, surprisingly enough, by Krugman himself, when he referred to "power relations" in contrast to "market forces."

"Power relations" — i.e., the use of physical force by one person or group against another — are present in all forms of government intervention in the economic system. There is no law, regulation, ruling, edict, or decree whose enforcement does not rest on the threat of sending armed officers to arrest and imprison violators, and, if they resist, to kill them if necessary.

This force is appropriate when used against common criminals, whose defining characteristic is that they themselves have previously used force against innocent victims, in committing such acts as robbery, rape, and murder. In cases of this kind, the government's use of force serves to protect the innocent and to enable them to go about the peaceful pursuit of their happiness.

Government intervention in the economic system, in contrast, is the use of force not against common criminals, who have previously initiated its use, but against peaceful citizens engaged in production and voluntary exchange and whose only "crime" is that they have done something the government has decided it does not like. This force serves to prevent people from doing what they judge to be in their interest to do and to compel them to do what they judge to be against their interest to do.

This last is what has been happening to the American people since the era of the "New Frontier" and the "Great Society." Since that time, the weight of government intervention has become sufficient to stop or nearly stop economic progress for large numbers of Americans and to cause actual economic decline for many.

Inflation, Social Security, and Medicare undermine the incentive to save and accumulate capital. Vast government budget deficits absorb large amounts of the savings and capital that do exist and divert them from business investment to financing the government's consumption. More recently, the government-engineered housing boom, built on the foundation of artificially low interest rates imposed by the Federal Reserve, has operated in a similar way and diverted further vast sums from business investment to housing purchases. And before the housing boom, the dot-com bubble, also created by the Federal Reserve, created the illusion of vast wealth and capital that served to squander substantial portions of the capital that did exist.

Inflation has also played a major role in enlarging the highest incomes in the economic system. This has been the case insofar as inflation (understood in terms of an increase in the quantity of money) entered the economic system in the form of new loans that served to drive up securities prices and thus the value of stock options. Take this away, and the rise in the highest incomes over the period that Krugman complains about would be much less, if it existed at all.But there is more. The last forty years or so have seen the imposition of environmental legislation and consumer product safety legislation, and numerous other government programs that serve to increase the costs of production. The great majority of people assume that the higher costs simply come out of profits and need not concern them. But the fact is that the general rate of profit in the economic system remains more or less the same, with the result that increases in costs show up as increases in prices, or as decreases in other costs, notably, wages.

The real wages of the average American are stagnating in large part because the higher real wages he could have had — precisely on the foundation of the work of today's great businessmen and capitalists — have instead been used to pay for the cost of environmental and safety regulations. Money that might have been paid as higher wages has instead been used to buy equipment, materials, and components required to be in compliance with these regulations. Larger supplies of goods that might have come into existence and driven down prices or at least prevented inflation from raising them as much as it has, have been prevented from coming into existence, especially by environmental regulations.

This is the answer economic theory gives to Krugman and to the hordes of other intellectual dilettantes whose writings and lectures on the subject of economic inequality proceed in ignorance and thus end up amounting to just so much clutter — clutter irrespective of the prestige attached to the venues in which it accumulates.

This article is copyright © 2006, by George Reisman. Permission is hereby granted to reproduce and distribute it electronically and in print, other than as part of a book. (Email notification is requested). All other rights reserved. George Reisman, Ph.D., is Professor of Economics (Ret.) at Pepperdine University's Graziadio School of Business and Management in Los Angeles and is the author of Capitalism: A Treatise on Economics (Ottawa, Illinois: Jameson Books, 1996). His web site is http://www.capitalism.net/. Contact him, see his Daily Article Archive, and comment on the blog.