GET NEWS AND ARTICLES IN YOUR INBOXPrint
A
A
Home | Mises Library | Sir Josiah Child: False Friend of Freedom 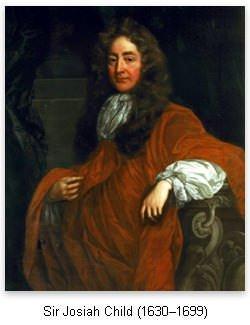 One of the most prominent economic writers of the latter half of the 17th century in England was the eminent Sir Josiah Child (1630–1699). He was a wealthy merchant who was usually affiliated with the powerful East India Company and indeed rose to be its governor, and the central concern in his economic writings was the by-now-traditional apologetic for the East India interests. That is, no one need worry about balance of trade from one specific country to another; a broader look at a nation's balance should be taken; and therefore the East India Company's notorious gold and silver exports to, or deficits with, the Far East are justified if we consider the company's re-exports to, and hence surpluses with, other countries. Because of this broader emphasis on the overall balance of trade, later economists often associated Child with a free-trade, laissez-faire approach.

Unwary historians were also entrapped by many of Child's fulminations against monopolies and monopolistic privileges granted by the state to cities, guilds, or trading companies. Again, they assumed that Child was an advocate of laissez-faire; what they overlooked was that Child was always careful to defend, as a special exception, the monopoly granted to the East India Company.1

Child never attained the genuine laissez-faire view that even the overall balance of trade was unimportant; on the contrary, he insisted that gold and silver bullion could only be exported freely if the overall effect of such export would be a net import of specie, in other words, an overall favorable balance of trade.2

One of Josiah Child's main deviations from free-market and laissez-faire doctrine was to agitate for one of the favorite programs of the mercantilists — to push the legal maximum rate of interest ever lower. Formerly discredited "usury laws" were making a comeback on faulty economic rather than natural-law or theological grounds.

From the early decades of the 17th century, English mercantilists were bitter at the superior prosperity and economic growth enjoyed by the Dutch. Observing that the rate of interest was lower in Holland than in England, they chose to leap to the causal analysis that the cause of the superior Dutch prosperity was Holland's low rate of interest, and that therefore it was the task of the English government to force the maximum rate of interest down until the interest rate was lower than in Holland. The first prominent mercantilist tract calling for lowering the interest rate was that of the country gentleman Sir Thomas Culpeper, in his brief Tract Against the High Rate of Usury (1621). Culpeper declared that Dutch prosperity was caused by their low rate of interest; that the English high interest rate crippled trade; and therefore that the government should force maximum interest rates down to outcompete the Dutch. Culpeper's pamphlet played a role in Parliament's lowering the maximum usury rate from 10 to 8 percent. Culpeper's tract was reprinted several times, and Parliament duly pushed the maximum rate in later years down to 8 and then 6 percent.

Each time, however, resistance increased, especially as government intervention forced down the maximum rate repeatedly. Finally, in 1668, the mercantilists tried for their most important conquest: a lowering of the maximum interest rate from 6 to 4 percent, which would presumably result in rates below the Dutch. As a propaganda accompaniment to this bill, Culpeper's son, Sir Thomas Culpeper, in 1668 reprinted his father's tract, along with one of his own, whose title says it all: A Discourse showing the many Advantages which will accrue to this Kingdom by the Abatement of Usury together with the Absolute Necessity of Reducing Interest of Money to the lowest Rate it bears in other Countreys.

Culpeper Senior's pamphlet was published along with the influential contribution by the already eminent merchant and man of affairs, Josiah Child, in his first pamphlet, Brief Observations concerning trade, and interest of money. Child was a prominent member of the king's council of trade, established in 1668 to advise him on economic matters. Child treated lowering the maximum rate of interest to 4 percent as virtually a panacea for all economic ills. A lower rate of interest would vivify trade, and raise the price of land; it would even cure drunkenness.

Josiah Child's pamphlet and his testimony before Parliament were centrepieces of the debate swirling around the proposal. Child's critics pointed out effectively that low interest in a country is the effect of plentiful savings and of prosperity, and not their cause. Thus, Edward Waller, during the House of Commons debate, pointed out that "it is with money as it is with other commodities, when they are most plentiful then they are cheapest, so make money [savings] plentiful and the interest will be low." Colonel Silius Titus pressed on to demonstrate that, since low interest is the consequence and not the cause of wealth, any maximum usury law would be counterproductive: for by outlawing currently legal loans, "its effect would be to make usurers call in their loans. Traders would be ruined, and mortgages foreclosed; gentlemen who needed to borrow would be forced to break the law."3

Child feebly replied to his critics that usurers would never not lend their money, that they were forced to take the legal maximum or lump it. On the idea that low interest was an effect not a cause, Child merely recited the previous times that English government had forced interest lower, from 10 to 8 to 6 percent. Why not then a step further? Child, of course, did not deign to take the scenario further and ask why the state did not have the power to force the interest rate down to zero.

It should be noted that this low interest deviation from laissez-faire accorded with Josiah Child's personal economic interest. As a leading East India merchant, Child and his colleagues were great borrowers not lenders, and so were interested in cheap credit. Even more revealing was Child's reply to the charge of the author of Interest of Money Mistaken that Child was trying to "engross all trade into the hands of a few rich merchants who have money enough of their own to trade with, to the excluding of all young men that want it." Child replied to that shrewd thrust that, on the contrary, his East India Company was not in need of a low rate since it could borrow as much money as it pleased at 4 percent. But that of course is precisely the point. Sir Josiah Child and his ilk were eager to push down the rate of interest below the free market level in order to create a shortage of credit, and thereby to ration credit to the prime borrowers — to large firms who could afford to pay 4 percent or less and away from more speculative borrowers. It was precisely because Child knew full well that a forced lowering of interest rates would indeed "engross all trade into the hands of a few rich merchants" that Child and his colleagues were so eager to put this mercantilist measure into effect.4