Saving the State from Itself 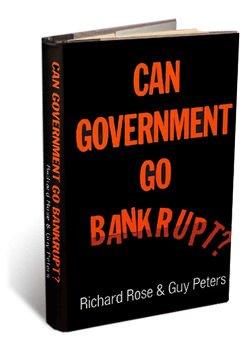 We have come to expect from Basic Books a product unique in trade-book publishing: acute intelligence and thorough scholarship combined with readability. Can Government Go Bankrupt? can only devalue Basic's reputation.

It is, in the first place, a piece of fluff, outrageously overpriced and overfootnoted compared to the flimsiness of its contents. Still worse is the misleading nature of its catchy title. It turns out that the book has absolutely nothing to do with bankruptcy as the term is known among both economists and the general public.

Why Professors Rose and Peters are willing to engage in these tactics is quite clear: as hard-nosed political scientists and directors of "policy studies," they want now to go public to assure themselves as wide a readership as possible. Why Basic Books should be willing to debase the coinage of their reputation is less clear, but perhaps they find the ideology of the book so congenial that they are prepared to overlook the schlock nature of the content.

For Rose and Peters are neoconservative political scientists, and as such they have a simplistic message on which they ring the changes almost endlessly. The message is that if the government tries to do too much — as it has in recent years — it will become "politically bankrupt," i.e., it will lose its "authority" among the public. And that, Rose and Peters believe, is about the very worst thing that could happen in the whole world.

At first, the message seems sensible enough, if scarcely original, but here it is handled with boring repetition. For surely governments should not try to take on more than they can accomplish, should not run up expenses that will prove unacceptable when it comes time to collect taxes or to incur the deficits necessary to pay for them, etc. In handing out benefits to the public — and to themselves — governments do tend to undervalue or not to examine the costs.

So words of caution, even if pretty banal and repetitious, are always useful, one would think. It is irritating, however, to see the authors bowdlerize the original Robert Heinlein phrase, "There ain't no such thing as a free lunch" (TANSTAAFL) to their own non-U motto, "There is no such thing as a free lunch." It is still more irritating for the authors to refer repeatedly to the "world recession of the 1970s" as making their message important, when that recession has been over for the past three years.

But there are far graver problems with the Rose-Peters thesis than those immediately evident. As neoconservatives they fully support the existing welfare-warfare state system. They raise no fundamental question about the system — and simply dismiss such criticisms as unthinkable.

Just as the Keynesians of the 1930s declared "saving capitalism" to be their aim, so the neoconservatives of the 1970s are trying to save the welfare-warfare state from what they see as its remediable excesses. They want the current system, but they want it fixed up and buttoned down: a state that will be strengthened because more modest and more efficient in dispensing its benefits to one and all.

And so there is no real recognition by the authors that the welfare-warfare state, however modest at first, may have inherently cumulative effects; that what might seem to be moderate today may have crippling effects tomorrow, by hobbling production incentives or generating inflationary expectations among the public.

Nor, of course, is there the slightest suggestion that perhaps the state and its backers have interests contrary to, let alone not identical with, the general run of the public. In short, Pluralism forbid that there be any hint that all states, now and forever, are necessarily run by a minority ruling class whose interests are antithetical to the rest of the population.

Quite the contrary. For Rose and Peters explicitly want the state to trim its sails so as to save itself: save it, not from revolution, which they do not consider a realistic option, but from the loss of political "authority," from "bankruptcy."

What exactly is this terrible condition? It is, say the authors, "the tyranny of weakness," a condition where

citizens become indifferent to its [government's] demands and cease to rely on it to realize their wants. In a politically bankrupt regime the major division is not between different parties competing for office, but between those who are meant to govern and the mass of citizens indifferent to who governs.

So to Rose and Peters the ultimate horror is indifference, a lack of enthusiasm for one's government manifested in indifference to its commands. In a politically bankrupt world, the citizens try their best to avoid political edicts, which they conceive to be external to themselves, and to escape paying taxes as best they can. And, horrors! They even cease to rely on government to "realize their wants."

To some of us, this state of affairs might seem rather promising; certainly, it is scarcely an evil so obviously monstrous as to require that we all bend our total energies to stop it from arriving on the scene. The authors' only defense for holding loss of political authority to be the ultimate evil is a few vague references to student riots, kidnappings in Italy, and civil war in Northern Ireland. These are cheap shots, and if one wanted to argue on that level, then those of us who are more eager to see the evaporation than the restoration of political authority could easily counter with far worse evils attributable to the state in full command of that much-touted authority: the Gulag, Auschwitz, Dresden, Hiroshima, Vietnam, to name a few.

We might ask some further embarrassing questions of Rose and Peters and of neoconservatives generally. Who are those "meant to govern''? "Meant" by whom and by what right? Such fundamental political questions are, of course, not so much as intimated here, much less discussed at length.

No, not for Rose and Peters are the hard moral or philosophic questions about politics. To them it is all very simple: the political scientist is simply a social physician, advising his client. "Just as a doctor may advise an overweight patient to count calories to lessen the risk of a heart attack, so a social scientist may note that if politicians do not count the cost of public policy, then political bankruptcy can result."

So there it is. Rose and Peters, and other social scientists with a similar mission, are not being any more controversial or value-laden than your friendly family physician, advising you for your own good how to run your life more effectively.

But the crucial problem, of course, is the leap in faith from the individual and his scientific adviser to the government and its counselors. For the individual advancing his own health does not have deleterious consequences for the rest of us; we can all applaud his concern and his doctor's sage advice.

It is not so patently evident, however, that advancing the health of the state is good for the rest of us. Indeed, this conclusion rests on several whopping assumptions: that the state's interest coincides with the interest of every one of its subjects, that there is harmony between state and society, and that there is no ruling class dominating and exploiting the rest of us.

Would anyone really say that it is self-evidently good and "value-free," for example, for social scientists to advise a government on how most efficiently to set up concentration camps, or how best to reduce opposition to such camps on the part of the public? Is our highest objective really to see to it that those who are "meant to govern" keep the allegiance of the bulk of their subjects under any and all circumstances?

If not, and if Rose and Peters would draw the line at the most outrageously despotic of states, then what principles would they set forth to guide them? In short, when, if ever, does the exercise of political authority become for them a worse evil than its enfeeblement?

No book on political authority that does not even address such questions is worthy of serious attention. The major interest of this book, in the last analysis, is in its revelation of the parlous state of the profession of political science.