Robert Shiller Is Shilling for Socialism 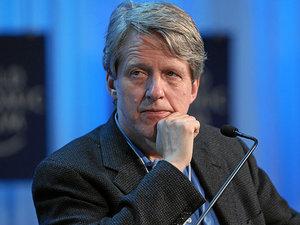 The Nobel Prize just gets cheaper and cheaper. Recent laureate Bob Shiller graces the New York Times with his latest rant that free-markets stink, bolstering his argument by making stuff up.

For starters, Shiller writes that America’s wealth “can be attributed” to regulation. Well, sure, it “can be attributed” to Zeus. Or sunspots. In the real world, America became the richest country long before the regulation age, and that position has been eroding ever since. Maddison (2007) estimates that by 1913 — before the New Deal regulatory explosion — the US was at $5,300 per person PPP (purchasing power parity), against $3,500 in Western Europe, $1,500 in Latin America, and $700 in the rest of Asia and Africa.

A similar pattern occurred in Europe, where the richest countries of the pre-modern age, Britain and Holland, used relatively free markets regulated by tort, while the rest of Europe mired hobbling markets with regulation and diktat. So, the story isn’t that regulation made the West. It’s that low-regulation economies soared ahead of the rest of humanity until socialists clipped their wings.

Indeed, Shiller doesn’t even seem to believe his own fantasy, writing, “The Thatcher-Reagan revolution a third of a century ago was a turning point away from market regulation, with mixed results.“

Here, the phrase “mixed results” is a red flag that the data doesn’t support his argument. Because Shiller would be kind enough to share the data if it did; it’s not very hard to look up GDP figures. And what do GDP figures tell us? That in Reagan’s eight years per capita GDP adjusted for inflation rose 3.5 percent per year. Compared to 0.7 percent in the previous eight years and 1.5 percent in the following eight years.

So, no, this is not a “mixed result.” This is a clear contradiction of Shiller’s claim that socialism makes America rich. Not to be too hard on Shiller, but he is the one who brought up Reagan.

By the way, if the US economy had kept up that Reagan 3.5 percent growth today, we’d have a per-capita GDP of $70,000. Twenty percent higher than Switzerland, and 50 percent above where we are today. Take your salary, top up by 50 percent, and that’s how rich you’d be if characters like Shiller would get out of the way.

Shiller’s next section is even heavier on the wishful thinking. He writes, “In fact, the real success of economies that embody free markets has much to do with the heroic efforts of campaigners for better values, both among private organizations and advocates of government regulation.”

I’m sure many economists are impressed that Shiller managed to mathematically quantify “real success” or “better values” to arrive at this particular “fact” of his. He is writing in The New York Times, not an academic journal, so we can forgive some looseness. Still, an economist writing about economics should take care in labeling opinions as facts, lest they be thought of abusing public trust in our field.

It helps to know where Shiller’s coming from. For a few years now, Bob Shiller’s been hawking institutionalized bail-outs. He wants to extend bail-outs into brave new corners of our lives. Career insurance for those who major in gender studies, housing insurance for house-flippers, even GDP insurance so countries that wreck their economies can get bailed-out by the prudent. The idea of making you pay for others’ screw-ups is one hustle socialists are always selling, simply because people vote for politicians who bail them out.

And this brings us to why Shiller’s telling tales about capitalism. Shiller thinks people are stupid so companies manipulate them, so Bob Shiller and his friends in government should run peoples’ lives. His vehicle here is Irving Fisher’s line that people don’t maximize utility — happiness — rather, in Fisher’s phrasing, “something that could better be described as ‘wantability’ rather than utility, for they are subject to temptation and mistakes.”

Shiller is dredging a strawman here; no economist thinks humans are perfect and error-free. What economists do debate is whether people should have overlords. Because the problem here is that somebody must decide whether you buy an iPhone, eat salad or bacon, or drive an SUV or a compact. If individuals don’t get to choose, who does? Alas, we know who: Bob Shiller and his buddies in government.

While overlords are antithetical to any lover of freedom, let’s humor Shiller and ask whether overlords can make “better” decisions than people. Here the key is what Hayek called the local knowledge problem: preferences aren’t automatically known by the overlords. Indeed, as Shiller complains, people often don’t even know their own preferences. Why would we think bureaucrats would know our preferences better than we ourselves do?

You might think this problem — in Roman poet Juvenal’s phrase, “who watches the watchers” — would merit some thought after a century of blood and poverty from socialism’s failures. Alas, we’re subjected to a non-stop stream of Nobel laureates oblivious to what Mises’s Human Action told us a generation ago: “Socialism is not an alternative to capitalism; it is an alternative to any system under which men can live as human beings.”

An unbanked population, an economy dependent on remittances, and dollarization. These combine to make El Salvador a...