The Road to Taxi Serfdom 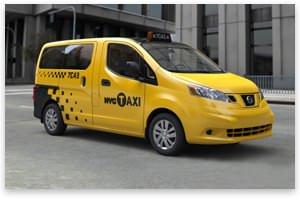 05/12/2011Robert P. Murphy
One of the more interesting recent stories of government absurdity is New York City mayor Michael Bloomberg's decree that starting in 2013, the Nissan NV200 minivan will become the official taxi of the city. Over the next five years, all other models will be phased out.

In addition to illustrating the corrupting effects of political power, the episode underscores the economic problems of government ownership of roads. Densely populated cities would be incredibly more pleasant with a free market in roads and taxis.

The editors of the New York Daily News were understandably aghast at the decision:

The Taxi & Limousine Commission [TLC] has traditionally set safety, comfort and performance standards, approved a number of vehicles that meet the grade and left the best judges of all — cabbies and fleet operators — to choose which worked best for them.

Although the editors hit upon the obvious problems, their critique seems to endorse the current system of having a Taxi & Limousine Commission in the first place. But New York consumers aren't getting any TLC from that particular body — only higher fares and less service.

A Textbook Example of Government Monopoly

To operate a taxi legally in New York City (and other major urban areas), the driver must obtain a medallion certifying his bona fides. By limiting the number of medallions issued, the city government artificially restricts the supply of taxis and drives up the fare. It is literally a textbook example of government creating an artificial monopoly in order to extract above-average rents.

The reader shouldn't think that the special privileges are a pure gift to those taxi drivers fortunate enough to obtain a medallion. On the contrary, the city auctions off new medallions at a hefty price. The following is from the TLC website, discussing an auction from a few years ago:

New York City Taxi and Limousine Commission (TLC) Commissioner/Chairman Matthew W. Daus has determined that the Minimum Upset (Bid) Price for each of the 43 available lots of two Minifleet (Corporate) Accessible Medallions that will be auctioned on May 2, 2008 will be $700,000. One Individual Accessible Medallion will likewise be available for bid on that date at a Minimum Upset Price, also set by the Chairman, of $189,000, as will two Individual Alternative-Fuel Medallions at a Minimum Upset Price of $300,000.

Naturally, black markets spring up in the face of government restrictions. People who have flown into JFK or LaGuardia airports may have noticed the "public service announcement" signs warning them not to accept transportation from shady-looking characters driving black, unmarked sedans. The point of these signs is to steer passengers into the vehicles allowed to line up at the airport's officially sanctioned taxi stand, since those drivers have paid the huge upfront fee to the government for their medallions.

To see just how ridiculous these things get, let me tell you about one time that I was trying to get from the Journal Square PATH station to my apartment. (I was a grad student at NYU at the time, commuting from New Jersey.) It was late and so the train ran infrequently, meaning there was a bunch of people waiting at the taxi stand. Naturally, the people were talking to each other, trying to figure out who lived near each other in order to split a cab ride.

The problem was that the cabbies were very reluctant to overload their vehicles, since the police would pull them over and ticket them. (Our driver explained this and pointed out his unfortunate colleague, who was pulled over that very moment because he'd been caught.) Yes, that's right: at 2 a.m., the police force decided that the best use of its resources would be to crack down on cabs taking too many people at once from the PATH station to their apartments a mile away.

A Free Market in Roads and Taxis

The standard defense of having a regulatory agency such as the Taxi & Limousine Commission is that under the "anarchy" of the market, there would be far too much traffic congestion, and unwitting consumers might hop into a cab only to learn that the fare is $1,000 per block.

Obviously, this is silly. To the extent that there would be problems like this, they would only flow from the fact that New York roads, bridges, and tunnels are all currently operated by the government. If private companies owned and operated them, we wouldn't see any of the nightmare scenarios, just as we don't see such problems with various stores renting mall space from private owners.

Naturally, we can't really know what a free market in roads would look like; one of the benefits of freedom is that it taps into the creativity of millions of people. But we can certainly sketch the framework to see that it would be vastly superior to the present chaos foisted on us by the government.

When thinking about Manhattan in particular, keep in mind that the real estate is incredibly valuable. It wouldn't surprise me if the efficient thing to do would be to have a lot fewer people driving their own vehicles, and instead switching to taxis. Rather than have (say) 50,000 people drive their own cars into the city and park them in garages where the vehicles sit uselessly for most of the time, those people instead could take taxis in. That would free up more prime real estate for shops, restaurants, and so on, rather than parking garages.

Even though parking is a pain (and expensive), the reason so many people choose to drive their own cars into Manhattan is that it is currently very expensive to take a cab over long stretches. But if it weren't for the artificial government restrictions, the supply of taxi services would be much larger, and cab fares would be a fraction of their current rates.

The owners of private roads would naturally have to finance them somehow. There have been various proposed schemes, and the methods would probably differ from region to region. Perhaps the businesses in a touristy area would pay for the roads that bring in their customers, or perhaps drivers would need to get devices to keep track of how much they used certain roads per month.

Yet surely what would not happen is that the road owners would charge ridiculously high, one-time entry fees to taxi drivers, while letting other people drive around for free. This is the present Manhattan system, and it is a recipe for traffic congestion.

As an economist, it appalls me how wasteful the current system is. Every weekday, millions of very productive engineers, doctors, writers, and other workers sit in traffic jams going into and out of Manhattan. Under private ownership, the tolls on bridges and tunnels, and the fees (however allocated) for driving on the normal roads would reflect the actual demand for the scarce product.

There would be time-varying prices, too, so that people who could rearrange their schedules to avoid rush hour could save money and thereby reduce peak congestion. (Such pricing structures have slowly been introduced even by the government's transportation authorities, but not very quickly.) Yes, the month after a full-scale privatization of all the roads and bridges, it might be very expensive to drive from Wall Street to the Hamptons at 4:45pm on the Friday of a three-day weekend. But at least it could be done in a very smooth fashion, without having to stop-and-go for an hour or more.

Even better, the high prices would only be temporary. Entrepreneurs would see the demand (signaled by the high prices) and would devise new ways of catering to it. After a few years of genuine private ownership in transportation systems, Manhattan would look like a science fiction movie. There would probably be multiple layers of new bridges and tunnels, and extremely clean subway systems that were never too crowded, because of appropriate pricing and customer management. (Do you ever go to a movie theater — even for a popular film on opening night — and have someone try to squeeze into your seat? Of course not: the theater owners don't allow patrons to crush each other. But that happens all the time with government subways.)

In a privatized setting, a sudden rainstorm would probably lead the taxis to bump up their fares (shown on electronic displays outside the vehicle). There might even be reserve taxis, normally parked in a garage in an outer borough, to be deployed when the forecast called for storms. This would alleviate the current problem, where it's impossible to find a cab in Manhattan if it starts pouring.

The average person can see the absurdity of Michael Bloomberg's recent selection of the "Taxi of Tomorrow." But even most of Bloomberg's critics can't imagine how smoothly a modern city could operate, if only capitalism were allowed to flourish.