The Rise of Statism | Mises Institute
Skip to main content

The Rise of Statism 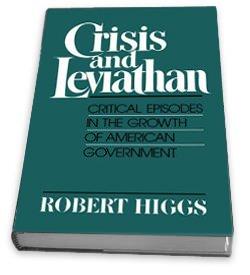 Crisis and Leviathan is a blockbuster of a book, one of the most important of the last decade. It is that rare and wondrous combination: scholarly and hard-hitting, lucidly written and libertarian as well. To Professor Higgs, being thorough and erudite does not mean timorously qualifying every statement, or torpidly and "judiciously" picking one's way through the minefields of ideology. Higgs's depth and breadth of learning has only intensified his commitment to truth, liberty, and the identification its enemies.

Robert Higgs, a noted economic historian, set about to answer a longstanding and vital question: why has the State grown so ominously in power in the United States during the 20th century? Why did we begin as a quasi-laissez-faire country in the 19th century and end up in our current mess? What were the processes of change?

The orthodox answer, the answer given by statist apologists, is all too simple: the world grew more complex, the increasing need for statism was perceived by intellectuals, statesmen, and farsighted businessmen; hence government expanded in response to those needs. Of course, no one who is not a naïve apologist for the status quo will fall for such pap.

Robert Higgs was a student of the Chicagoite school of "cliometrics" fathered by Douglass North, of the University of Washington. The Northian approach to economic history is marked by several features:

It should be pointed out that c is totally fallacious on its own, but only gains seeming plausibility if you hold b, and then add whopping assumptions about measurement of determined behavior. It is patently impossible, even for cliometricians, to embody ideology, people's values and ideas into mathematical equations.

We can also see that a, the Whig determinism that no status quo can be changed, combined with b, strict economic determinism, leads to total pessimism about changing any situation, past or present, in behalf of liberty. If ideas or principles are unimportant and can have no influence on history, as the public-choice wing of Chicagoites has emphasized, then there is no hope to overcome the more pointed and intense economic interest of groups clamoring for special privileges from the State.

The special delight of Crisis and Leviathan is that Higgs has worked himself loose from Northian cliometrics. Much of the beginning of the book is a knowledgeable and trenchant assault on its assumptions and procedures. The key to historical change, and specifically to the growth of statism, North points out, was a change in ideology, in the ruling set of ideas in society. The crucial watershed was the adoption of statism by the American intellectuals during the Progressive period. As a result, any economic or political crisis could give a major thrust to statism that it could not do before.

One great accomplishment of Professor Higgs is to vindicate the role of ideas in history; more specifically, the role of ideology in bringing about statism in the 20th century. He has rescued the discipline of economic history from the Chicago variant of economic determinism.

But this is scarcely all. For in virtually every free-market economist of our time, there is one great big hole, one big gap in his critique of statism: war. War is sacrosanct, considered necessary, inevitable, and good; and so while free-market economists will devote a great deal of energy to the evils of government intervention in oil, or forestry, or the retail trade, there is little or nothing said about the horrors and distortions imposed by the Pentagon and the war-making Leviathan State.

In Crisis and Leviathan, Higgs identifies war as the critical key to the growth of statism, making his achievement all the more remarkable. World Wars I and II, coming on top of the adoption of statist ideology, were the critical thrusts for the triumph of statism, in economic and social affairs. Higgs points out that World War I, in contrast to previous American wars, was used to impose a collectivism that became a cherished model for all statists as a permanent feature of American life; and that World War II completed the job.

Usually, free-market economists, ever wary of making value judgments, restrict their critique of conscription to a mere argument that it is an inefficient way of mobilizing manpower: hence their call for a volunteer army as a more efficient means of allocating labor and imposing social costs. Robert Higgs, in contrast, argues that the draft is central to the development of statism in the 20th century. In an important contribution, Higgs points out that once conscription was adopted, the statists were able to use the draft as a powerful weapon for the control of the economy and society. Essentially, they argued that "if our boys are drafted, then surely property must be controlled and conscripted as well."

Already, alert conservatives have denounced Crisis and Leviathan for its pinpointing of war and militarism as a key to statism. The reviewer for the American Spectator denounced Higgs for his "libertarian" leanings. When conservatives are faced with a choice between war and freedom, we all know which they invariably choose.

Not the least of the joys of Crisis and Leviathan is the love of liberty and the hatred of its enemies that shines through the scholarly apparatus of the book. In Yeats's famous phrase,

The best lack all conviction, while the worst
Are full of passionate intensity.

What a treasure, then, when an erudite scholar and distinguished economic historian such as Robert Higgs, conveys a passionate intensity in favor of liberty and against the depredations of the State!

We live in an age of outrageous hype, when publishers and book dealers tout every other book in print as "the greatest of all time." So what are we to do when a book of genuine greatness comes along? I say this about very few books: make this your top priority this year; rush out and read the book. And then proclaim it throughout the land.

This review was originally published in Liberty, 1987.