A Rejoinder to Brad DeLong 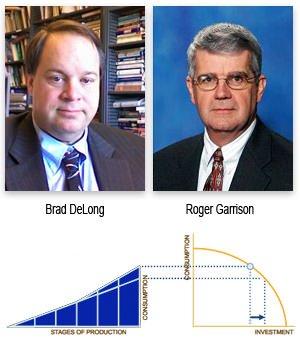 "My article did not contain any problematic math; it contained no math at all — because the Austrians recognize that the relationship between cause and effect is not a quantitative relationship."
– Roger Garrison

In his dismissive response to my recent Freeman article ("Mainstream Macro in an Austrian Nutshell," May 2009), Brad DeLong provides some arithmetic that supposedly weighs against the Austrian theory of the business cycle as a plausible basis for understanding the current recession. He argues that the estimated $2 trillion worth of housing stock write-downs and the consequent construction slowdowns imply that the unemployment rate during the next decade should be higher by only 0.6%. On the basis of this calculation, he announces that the Austrian theory "just does not work." (DeLong's "The 'Austrian' Story in a Nutshell" appears as the final section in his paper "The Financial Crisis of 2007-2009: Understanding Its Causes, Consequences — And Its Possible Cures.")

The Austrians might well be similarly dismissive of DeLong's announcement, but it is worth pointing out that the differences between DeLong and the Austrians are not to be resolved by doing the math but by understanding the theory. Tellingly, DeLong has overestimated and, at the same time, underestimated the significance of the housing bubble in the Austrians' view of the current recession.

First, the overestimation: The Austrian theory has it that artificially low interest rates distort the temporal pattern of investment. With new money masquerading as increased saving, resources are misallocated into interest-sensitive activities, which, broadly speaking, means investments in the early stages of long-term projects and in durable capital, including, of course, the housing stock. The temporal discoordination, which initially is accompanied by increased employment and increased spending, eventually necessitates a recoordination. In short, artificially cheap credit gives rise to an unsustainable boom.

In this context, the housing "bubble" is seen as the most dramatic aspect of the more widespread economic "boom." The lead role that housing has played in this most recent boom-bust episode is fully explained by the government's ill-conceived housing policies that began during the Depression era but that became particularly perverse in recent years. DeLong's back-of-the-envelope calculations reflects his unduly narrow focus on the boom's most dramatic aspect and his neglect of the less-dramatic-but-more-widespread aspects. The Austrians focus on the overall temporal pattern of investment in setting out their business-cycle theory but acknowledge the historical uniqueness of each particular cyclical episode.

Second, the underestimation: Implicitly, DeLong intends his title phrase "'Austrian' Theory of the Recession" to mean a quantitatively plausible accounting of the depth and length of the recession. This meaning is wholly in line with mainstream accounts in which swings in aggregate demand or changes in the money supply correlate tolerably well with recession-level unemployment figures and allow for DeLong-style calculations that add plausibility. According to the unstated methodological maxim, the "cause" must be shown to be roughly equal in magnitude to the "effect." It is precisely the demonstration of such rough equalities that F.A. Hayek had in mind when he adopted the title phrase "Pretense of Knowledge" for his Nobel lecture. Sometimes cause and effect are of similar magnitudes (Mt. Vesuvius and Pompeii come to mind); sometimes not (a careless smoker and a forest fire can serve as the polar case).

"The Austrian theory is not a theory of recessions per se; it is a theory of the unsustainable boom."

The Austrians can affirm that the housing bubble does not — and is not intended to — account for the eventual length and depth of the current recession. (And as indicated below, even the more broadly conceived temporal discoordination attributable to the central bank's interest-rate policies fails to account directly and fully for the recession's length and depth.) Nonetheless, the temporal discoordination — or more precisely, the excessively favorable credit conditions maintained by the central bank — can be identified as the cause. DeLong writes, "Garrison and the other Austrians have a very basic problem with their math." But with his own math, DeLong demonstrates only that the housing bubble was not Mt. Vesuvius. Implicitly, though, he is suggesting that something else was — that there must be some other candidate cause whose magnitude matches the severity of the recession.

My article did not contain any problematic math; it contained no math at all — because the Austrians recognize that the relationship between cause and effect is not a quantitative relationship. Both Mt. Vesuvius and the smoker's carelessness count as causes. So, too, do the cheap credit and consequent temporal discoordination that preceded the downturn.

The Austrian theory is not a theory of recessions per se; it is a theory of the unsustainable boom. As such, it has a much stronger link to the underlying microeconomics than does much of today's mainstream theorizing. The Austrians focus broadly on credit markets and ask what happens when the price of credit, i.e., the interest rate, is held below its market-clearing level. If interest rates were held too low by legislation (interest-rate caps), there would follow an immediate credit crunch. This "if-then" proposition is a direct analogue to the proposition that rent control causes a housing shortage and, more generally, that price ceilings cause quantities demanded to exceed quantities supplied.

But what if the central bank papers over the shortage with newly created money? Would this way of bridging the gap between credit supplied and credit demanded transform the would-be credit crunch into sustainable economic growth? Hardly. It would simply insert a time delay between the "if" and the "then." In effect, the credit crunch is transformed into a boom and then a bust. The extent of the resource misallocations during the boom have a direct bearing on one aspect of the downturn. The necessary reallocations are roughly proportional to the prior misallocations. It is in this context that we can say, "the bigger the boom, the bigger the bust." But for both theoretical reasons and historical reasons, busts can and often do dwarf the preceding boom.

Much of the macroeconomic data that are used to track boom-bust episodes reflect an inherent asymmetry in departures from full employment. By the very nature of the things, there is greater scope for sub-natural levels of employment than for super-natural levels of employment. In market economies, idleness is not a binding constraint; scarcity is. In setting out his so-called "Plucking Model," Milton Friedman cited this asymmetry as justification for rejecting the whole notion of a boom-bust cycle and for focusing, instead, on the empirically relevant bust-boom cycle. Again, the Austrians are not swayed by quantitative similarity. Of course, the recovery from a collapse has about the same vertical dimension as the collapse itself. But that fact does not negate the proposition that the collapse has a strong theoretical connection to the preceding boom.

The Austrians are alive to the asymmetry that Friedman emphasized. And they have long been alive to the possibility — and even the likelihood — that the bust will be subject to some strong positive feedback. The boom eventually ends and its super-natural level of employment wanes. But full employment does not constitute a bottom limit to the contraction. The discoordination necessarily entails some unemployment. Further, the economy can spiral deeper into recession — with declining income impinging on spending and declining spending impinging on income. Hayek wrote about this "secondary contraction" long before Keynes published his General Theory.

His point, though, was the secondariness of this complicating problem. Hayek did not mean quantitative secondariness; the spiraling downwards of income and spending could well be — and in the early 1930s undoubtedly was — much more devastating than the hardships that were more directly connected to the resource misallocations. The spiraling downwards was secondary in the causal order of events. The charge, here, should not be that the Austrians ignored the spiraling downward of the aggregate magnitudes. They didn't. The more revealing charge is that the spiraling downwards is the whole story in Keynes's reckoning. Keynes was not alive to the nature of the initial downturn and its relationship to the preceding boom. For him, it was all about the waning of "animal spirits."

Finally, as in earlier episodes, the actual length and depth of the current recession will not be determined simply by the most dramatic excesses of the boom, or even by the general credit-induced temporal distortions. The actual length and depth will not even be fully determined by those distortions as magnified by the secondary contraction, but rather by the initial and secondary contractions as compounded by the ill-conceived policies aimed at restoring macroeconomic health. The pork-filled megaspending programs and the consequent record debt levels and inflation threats, together with the bailouts and partial takeovers, will give the economy more to recover from while hampering the recovery process.
Author: