Read Hoppe, Then Nothing Is the Same | Mises Institute
Skip to main content

GET NEWS AND ARTICLES IN YOUR INBOXPrint
A
A
Home | Mises Library | Read Hoppe, Then Nothing Is the Same

Read Hoppe, Then Nothing Is the Same 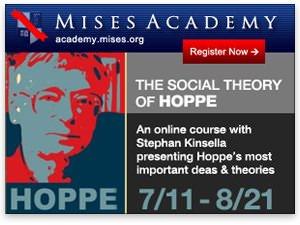 Austrolibertarianism begins with Murray Rothbard. His mentor Ludwig von Mises systematized Austrian economics and put it on a modern, rigorous foundation. Rothbard built on, and extended, this Misesian-praxeological Austrian framework, and he integrated it with his own radical anarchocapitalism to produce the superstructure of modern Austrolibertarian thought.

Professor Hans-Hermann Hoppe, who studied under and worked with Rothbard from the 1980s until Rothbard's untimely death in 1995, was Rothbard's greatest student. After Rothbard's death, Hoppe became the editor of the Journal of Libertarian Studies, a coeditor of the Review of Austrian Economics, and then a coeditor of the Quarterly Journal of Austrian Economics. His important books include A Theory of Socialism and Capitalism, The Economics and Ethics of Private Property, Democracy: The God that Failed, and The Myth of National Defense.

It is no surprise, then, that Professor Hoppe's writing has inspired scholars all over the world to follow in his footsteps and to provide a scientific foundation for individual freedom and a free society (his works have been translated into at least 22 languages). His influence was extended when he founded the international Property and Freedom Society (PFS) in 2006 as a more radical alternative to the now-watered-down Mont Pèlerin Society.

The video below is a good demonstration of the power of Hoppe's ideas. This is a talk Professor Hoppe gave in April 2011 at the Second Austrian School Conference, Mises Institute Brasil, in Porto Alegre, entitled "State or Private Law Society?"1 It's a truly masterful presentation of the Austrolibertarian defense of what Hoppe calls the "private-law society." For example, Hoppe here brilliantly and succinctly argues that there is but one correct answer to the problem of social order: the libertarian-Lockean rule (starting at 7:30 in Part 1; see also Parts 2, 3, 4, 5). He explains why the only answer to the question of who owns your body is you — who else would own it? All other competing rules are either incoherent, contradictory, or obviously unfair. And furthermore, when you appropriate an unowned resource, no one else can have a better claim to it than you, the person who had it first.

Fernando Chiocca, of Mises Brasil, told me that the audience was riveted and loved it; he got standing ovations,

and one reaction in particular was pretty interesting. We have only a couple of Austrian professors in Brasil, and one of them wasn't acquainted with Hoppe's work. (He is what we used to call "old-school Austrian," whose ideas were shaped in the era before the modern Mises Institute website, and mainly influenced by Hayek.) In a matter of seconds after Hoppe's speech, he was in our bookstore buying all Hoppe's books that we had for sale, requesting autographs from Dr. Hoppe, repeating how marvelous Hoppe was, and declaring to everyone his instantaneous conversion to "Hoppeanism."

I am reminded here of what Lew Rockwell wrote of Hoppe in the festschrift written in Hoppe's honor (Property, Freedom, and Society: Essays in Honor of Hans-Hermann Hoppe):

This same Hoppean effect — that sense of having been profoundly enlightened by a completely new way of understanding something — has happened many times over the years. He has made contributions to ethics, to international political economy, to the theory of the origin of the state, to comparative systems, to culture and its economic relation, to anthropology and the theory and practice of war. Even on a subject that everyone thinks about but no one really seems to understand — the system of democracy — he clarified matters in a way that helps you see the functioning of the world in a completely new light. There aren't that many thinkers who have this kind of effect. Mises was one. Rothbard is another. Hoppe certainly fits in that line. He is the kind of thinker who reminds you that ideas are real things that shape how we understand the world around us. …

Often times when you first hear a point he makes, you resist it. I recall when he spoke at a conference we held on American history, and gave a paper on the US Constitution. You might not think that a German economist could add anything to our knowledge on this topic. He argued that it represented a vast increase in government power and that this was its true purpose. It created a powerful central government, with the cover of liberty as an excuse. He used it as a case in point, and went further to argue that all constitutions are of the same type. In the name of limiting government — which they purportedly do — they invariably appear in times of history when the elites are regrouping to emerge from what they consider to be near anarchy. The Constitution, then, represents the assertion of power.

When he finished, you could hear a pin drop. I'm not sure that anyone was instantly persuaded. He had challenged everything we thought we knew about ourselves. The applause was polite, but not enthusiastic. Yet his points stuck. Over time, I think all of us there travelled some intellectual distance. The Constitution was preceded by the Articles of Confederation, which Rothbard had variously described as near anarchist in effect. Who were these guys who cobbled together this Constitution? They were the leftovers from the war: military leaders, financiers, and other mucky mucks — a very different crew from the people who signed the Declaration of Independence. Jefferson was out of the country when the Constitution was passed. And what was the effect of the Constitution? To restrain government? No. It was precisely the opposite, just as Hoppe said. It created a new and more powerful government that not only failed to restrain itself (what government has ever done that?), but grew and grew into the monstrosity we have today. It required a wholesale rethinking of the history, but what Hoppe had said that shocked everyone turns out to be precisely right — and this is only one example among many.

If you are interested in the ideas of Mises and Rothbard, it is essential to study the work of Professor Hoppe. Starting on July 11, I will be teaching a six-week online Mises Academy course to present and discuss Professor Hoppe's most important ideas and theories, including his brilliant critique of positivist methodology as applied to the social sciences, his groundbreaking "argumentation-ethics" praxeological approach to political philosophy,2 his encompassing comparative analysis of socialism and capitalism, his profound critique of democracy, and a host of other insights and contributions to areas such as monopoly theory, the theory of public goods, the sociology of taxation, the private production of security, the nature of property and scarcity, immigration, economic methodology and epistemology, and the evolution of monetary institutions and their impact on international relations.

I decided to teach this course for a few reasons. First, as noted above, there was a need for this course because of the growing interest in Hoppe's ideas and the increasing number of younger or newer Austrolibertarians just beginning to absorb the thought of the masters. Second, while I did not enjoy teaching mainstream law when I served as an adjunct law professor at a local law school a few years back, I have greatly enjoyed and benefitted from the three online Mises Academy courses I've taught so far (Rethinking Intellectual Property twice, and Libertarian Legal Theory once). And based on student feedback, the students have enjoyed the Mises Academy format in general and my courses in particular (see, e.g., the comments I noted in my articles "Teaching an Online Mises Academy Course," "Introduction to Libertarian Legal Theory," and "Rethinking IP").

Third, aside from Hoppe himself, I felt uniquely qualified to present this overview of Hoppe's work. I've been a close associate and (informal) student of Professor Hoppe since 1994 — I served as book-review editor of the JLS for five years under Hoppe's editorship, I founded and edit Libertarian Papers, the successor journal to the JLS (Professor Hoppe serves on its editorial board); and, with Guido Hülsmann, I was editor of the festschrift in Hoppe's honor, Property, Freedom, and Society: Essays in Honor of Hans-Hermann Hoppe. I have also built on Hoppe's work in my own libertarian theorizing (e.g., Against Intellectual Property, "Punishment and Proportionality: The Estoppel Approach,"

When I proposed this course to Professor Hoppe, though he was humble in reaction, he fully endorsed the idea. He has graciously offered to provide a written response to submitted questions near the end of the course.

The reading material will consist primarily of A Theory of Socialism and Capitalism and The Economics and Ethics of Private Property (both free online in ePub and PDF formats), several other selected articles by Professor Hoppe, and articles by others commenting on Hoppe's thought (such as my own "Argumentation Ethics and Liberty: A Concise Guide," "New Rationalist Directions in Libertarian Rights Theory,"

and "Defending Argumentation Ethics: Reply to Murphy & Callahan"), which are also available for free online.

This will be a fun and intellectually stimulating course. I am looking forward to it.