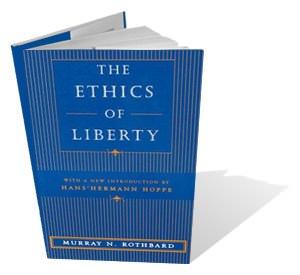 Tags Free MarketsEntrepreneurshipHistory of the Austrian School of EconomicsPhilosophy and Methodology

Professor Hans Hoppe, in his outstanding new introduction to the reissue of The Ethics of Liberty, hits the nail on the head. He contrasts Murray Rothbard with Robert Nozick, a much more famous figure among academic philosophers and political theorists. Although both writers embrace libertarianism (Nozick much less ardently or consistently than Rothbard), their styles of thinking differ entirely. Nozick, according to Hoppe, is impressionistic and given to flights of fancy. Rothbard, by contrast, reasons by strict deduction from self-evident axioms.

Agree with him or not on Nozick, no one can dispute the accuracy of Professor Hoppe's characterization of Rothbard. Although I read Ethics of Liberty for the first time several years before its initial publication, and mistakenly thought I knew the book well, rereading it has punctured my complacency. Rothbard is even more consistent and rigorous than I had imagined.

One illustration must here suffice. As even Macaulay's schoolboy knows, Rothbard grounded his political ethics on the principle of self-ownership: each person rightfully owns his or her own body. Few libertarians would dissent; but few, if any, have seen the implications of this principle so clearly as Rothbard.

Unfortunately, many libertarians, devoted to the right to make contracts, hold the contract itself to be an absolute, and therefore maintain that any voluntary contract whatever must be legally enforceable in the free society. Their error is a failure to realize that the right to contract is strictly derivable from the right of private property, and therefore that the only enforceable contracts … should be those where the failure of one party to abide by the contract implies the theft of property from the other party. (p. 133)

You cannot then, sell yourself into slavery. You can voluntarily submit to the will of another; but, should you change your mind, no legal force can compel you to obey another's bidding. Why not? Contract, to reiterate, does not stand as an absolute: only what fits together with self-ownership can be enforced. You can only give away your property, not yourself.

So far, I suspect, most libertarians would follow Rothbard. (Nozick, if I have understood him, would not.) Once you think about a contract to enslave yourself, unlimited freedom of contract loses its surface plausibility. But Rothbard goes further; and here the immense force of his systematic consistency emerges.

Rothbard uses the principle of self-ownership to solve a complicated problem of legal theory. What is the basis for enforcing a contract? According to some theorists, including such eminences as Oliver Wendell Holmes and Roscoe Pound, a contract is in essence a promise. Because you have, in return for a consideration, promised to perform some act, you may be compelled to keep your promise.

A variant of this position holds that a contract leads the parties to expect behavior of a specified kind. They accordingly plan their own actions and suffer loss if their expectations are disappointed. To help ensure that expectations are met, contracts may be enforced.

Rothbard easily dispatches these theories. Both contract as promise and contract as fulfilled expectation negate self-ownership. You may alienate only your property, not your will. Rothbard draws the drastic, though strictly logical, consequence that no promise as such can be enforced. Every legally binding contract must involve a transfer of titles between the parties at the time the contract is made.

Our author's conclusion follows from his premise; but why accept the axiom of self-ownership? Here once again I found my rereading instructive. I had, I imagined, the essence of Rothbard's argument firmly in mind. He argues that all societies confront three alternatives: each person owns himself, some people own others, or each person owns a part of everyone else.1

So far, so good. But then I went wrong. I was inclined to think that Rothbard next resorted to moral intuitions. Isn't it obvious that each person should own himself and that slavery must be rejected?

Rothbard's actual argument is much more subtle and complex than the sketch embedded in my mind. He relies heavily in his defense of self-ownership on a point of fact. Everyone in reality is in control of his own will. If I obey another, I must always make the decision to do as he wishes; and the threat of violence on his part should I follow my own course leaves the situation unchanged. I must decide whether to accede to the threat.

"So what?" you may say. "Even if Rothbard is right that you cannot, in some sense, alienate your will, how does he get to the conclusion he wants? From the fact that you control your own will, how does the ethical judgment follow that you ought not to threaten violence against another self-owner? Isn't Rothbard guilty of that dread fallacy, the derivation of an ought from an is?"

To our imagined objector, Rothbard would demur. He does indeed derive an ought from an is, but he denies that he is guilty of fallacy. Instead, he maintains that ethical principles follow from the nature of man. Because man has free will, it does indeed follow that he ought not to be coerced by others, unless of course he initiates violence: then, Rothbard holds, one may respond with all necessary force. ("Tolstoyan" is not, in our author's vocabulary, a word of praise.)

Is Rothbard right? If he is, he has overthrown the dominant way of doing moral philosophy today. In making his case, Rothbard displays his remarkable scholarly ability to extract just what he needs from a vast array of sources. The works of little-known Aristotelian philosophers, such as John Wild and John Toohey, SJ, figure to great effect as Rothbard builds his argument.2

Rothbard bases his system on self-ownership and defends that principle through an ethics of natural law. But it is not only in the foundation and consistent elaboration of his system that he displays his skill. I was again and again amazed, as I went through the book, how often Rothbard anticipates the objections of his critics.

If you may acquire unowned property through Lockean labor mixture, does this not unfairly bias matters in favor of the first possessor? Imagine a group of shipwrecked sailors swimming toward an uninhabited island. Does the first person to reach the island acquire it? Can he then refuse entry to his shipmates, unless they pay exorbitant rents to him? If he can, has not something gone wrong with the system, supposedly ironclad in its logic?

Not at all. Rothbard easily turns aside the objection.

Crusoe, landing upon a large island, may grandiosely trumpet to the winds his "ownership" of the entire island. But, in natural fact, he owns only the part that he settles and transforms into use.… Note that we are not saying that, in order for property in land to be valid, it must be continually in use. The only requirement is that the land be once put into use, and thus become the property of the one who has mixed his labor with, who imprinted the stamp of his personal energy upon, the land. (p. 64)

We may imagine another objector at this point. Suppose Rothbard can handle the objections of Georgists and others that first possessors can in his system hold property to ransom all others. Is not his system, however logical, of no practical relevance?

Most property titles today do not stem by a clear line of transmission from a Lockean first owner. On the contrary, would we not find that many land titles go back to acts of violent dispossession? Perhaps even as we speak we trespass on land originally owned by Indian tribes. Would not an attempt to put Rothbard's system into practice quickly lead to chaos?3

As usual, Rothbard has thought of the objection himself. He answers that the burden of proof lies on someone who disputes a land title. If the objector cannot make good his claim, the present possessor owns his land legitimately. Absent a clear proof by the objector that land has been forcibly wrested from him or his ancestors, the current possessor's claim holds good.

But what if the objector can make good his claim? Then Rothbard is entirely prepared to follow out the implications of his system. Many landowners in Latin America and elsewhere would in a Rothbardian world find themselves in very reduced circumstances.

The brief reference to utilitarian economists suggests another aspect of Rothbard's thoughts, one that Professor Hoppe has insightfully stressed. Our author was keen to distinguish his thought from alternative defenses, in his view mistaken, of the free market. One of his criticisms particularly interested me, for personal reasons.

For many years, Murray in a good-natured way teased me for undue partiality to Robert Nozick. I foolishly resisted his counsel, though I eventually came to see the light. After renewed attention to his chapter on Nozick, I am at a loss to understand why it took me so long to change my mind.

As Rothbard notes, a key part of Nozick's argument for the state rests on a crucial equivocation. Rothbard contends that ideally, protective services should be provided by competing private protection agencies. A compulsory monopoly agency, i.e., a government, is neither necessary nor desirable.

Against Rothbard, Nozick deploys an argument that at first seems devastating. Grant Rothbard his private market anarchism, Nozick suggests. Then, in a way entirely consistent with Rothbard's system, a monopoly agency will spring up. Rothbard's system defeats itself.

Rising to the challenge, Rothbard locates a crucial weakness in Nozick's argument. Nozick concerns himself greatly with cases in which protection agencies clash over the appropriate procedures to use in trials of criminals. One outcome that Nozick canvasses is an agreement among the agencies on an appeals court.

So far Nozick is on the right lines, and Rothbard himself lays great stress on the need for agreements of exactly this kind. But, according to Nozick, agencies that so come to agreement have coalesced into a single agency. Rothbard finds in this step neither rhyme nor reason: do disputants who agree to arbitration suddenly constitute a single firm? Nozick's refutation of Rothbard rests entirely on an arbitrary definition.

I have been able to address only a few of the topics in this rich and thoughtful book. Yet in doing so, I fear that I have tried my readers' patience by too-frequent reminiscence. But this book has meant a great deal to me.