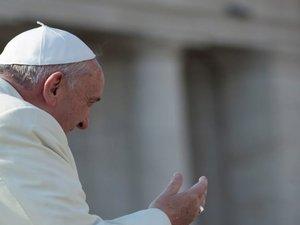 Pope Francis’s new encyclical “On Care for Our Common Home” has been released to much acclaim from the mainstream media. One German news source declares “Papal encyclical could break climate change deadlock.” “Pope Francis' views on climate change present a moral challenge to many 2016 GOP contenders,” declares US News and World Report. Not in many decades has a papal document been so easily used as a tool for political and electoral ax-grinding.

Indeed, we would not normally cover a papal document at mises.org at all. Benedict’s “Caritas in Veritate,” for example, was published without any mention in free-market circles.

On the other hand, this pope is far more political than most modern popes. This new encyclical, combined with his first one, “Evangelii Gaudium,” contains numerous assertions about public policy that stem from a particular historical and political worldview.

And what is the worldview of this pope? Well, it is a vision that is relentlessly pessimistic. According to Francis, the world is very nearly falling down around us. The poor are getting poorer, he claims. The inequalities between rich and poor are worse than ever, he says. Pollution is making us sicker than ever, he implies. And the basic requirements for sustaining human life are becoming more inaccessible than ever. These claims serve a purpose: to illustrate that the rise of industrialization and market economies (a modern phenomenon) are the cause of these social and environmental ills.

Francis’s Worldview Does Not Fit the Facts

In painting a picture of a world that Francis says resembles "an immense pile of filth," Francis is ignoring a wealth of empirical data through which his assertions can be shown to be simply and factually wrong.

For example, when Francis released “Evangelii Gaudium,” many discovered that the document relied on a view of the world in which the standard of living worldwide was relentlessly declining, when the empirical data, in fact, suggests the opposite. Marian Tupy at The Atlantic wrote at the time:

But here’s the problem: The dystopian world that Francis describes, without citing a single statistic, is at odds with reality. In appealing to our fears and pessimism, the pope fails to acknowledge the scope and rapidity of human accomplishment — whether measured through declining global inequality and violence, or growing prosperity and life expectancy.

Tupy then quotes this line from Francis:

We have to remember ... that the majority of our contemporaries are barely living from day to day, with dire consequences. A number of diseases are spreading. The hearts of many people are gripped by fear and desperation, even in the so-called rich countries. The joy of living frequently fades, lack of respect for others and violence are on the rise, and inequality is increasingly evident. It is a struggle to live and, often, to live with precious little dignity.

Unfortunately, this paragraph — a rather maudlin one, to be sure — could be true for any time in human history, and yet it is less true now than it was in the past. Francis appears to not understand this. It's one thing to note — as any Christian clergyman should — that the plight of the poor requires our attention and charitable action. It's something else entirely to make unsupportable claims that the situation is getting worse.

Similarly, with his new encyclical, Francis turns to environmental problems, and proceeds through a long laundry list of risks to human life and welfare — many of which he implies are modern and something new —and that things are also accelerating in a negative direction. This view especially comes through when he says:

It is possible that we do not grasp the gravity of the challenges now before us. “The risk is growing day by day that man will not use his power as he should” ... we stand naked and exposed in the face of our ever-increasing power, lacking the wherewithal to control it.

Human health is more and more ravaged by pollution every day, Francis suggests. And yet, one familiar with the real state of worldwide economic development doubts these assertions.

In an editorial at the Catholic Herald, Philip Booth writes:

Firstly, as is often the case with Pope Francis, his analysis of the economic state of the world is unduly pessimistic. It is correct to say that pollution leads to premature deaths. Indeed, many would argue that climate change will do so and some that it already does so. But, there are trade-offs. And the underlying picture is one of huge increases in life expectation and health because of the economic development that is taking place. Indeed, in many parts of the world, the environment is improving dramatically.

As Booth notes, air pollution leads to real health problems. But to find this at work, one should not look to wealthy countries, but to countries that have long shunned the market economy. China, for instance — which is on nobody’s list of most-free countries — is a pioneer in dumping pollutants into the water and air. Similarly, during most of the twentieth century, one found the most unfortunate pollution in the communist world which continued with its belching smoke stacks long after the capitalist world had cleaned up its own air. In other words, there is a solution to these problems, and it is the more market-oriented parts of the world that have found it.

Meanwhile, the World Bank reports “remarkable declines in world poverty,” and the UN reports “world poverty is shrinking rapidly.” The American Association for the Advancement of Science reports that life expectancy around the world has increased steadily for nearly 200 years. The Institute for Health Metrics and Evaluation reports that life expectancy has been increasing while the death toll from diseases continues to fall. That population bomb we were warned about never went off.

Moreover, if we use the economic data to make real comparisons between those countries that are more market-oriented versus those that are less so, we find that it is the market economies that provide better and cleaner conditions for the poor. To illustrate this, we need only ask the question: “would you rather be a poor person in the United States or in India? Would you rather be poor in Sweden or in Bolivia?” In spite of its reputation as a socialist paradise, the fact is that Sweden is far more capitalist and market-oriented than the less-capitalist countries that Francis seems to think are closer to the ideal. And the US, for all its faults, is a country where the poor have televisions and air conditioning.

Unfortunately, it is necessary for Francis to stick to his pessimism in order to forward his main and central thesis: the advancement of the market economy worldwide has made the world a worse place.

Industrialization and Market Economies Have Brought Wealth and Longer Lives

But, just as life expectancy for humans worldwide has been climbing for the past 200 years, so has industrialization, free trade, and a turn to markets instead of command economies, and autarky.

Meanwhile, the world is in the midst of enormous migration from rural areas to cities, not because cities are so awful and dirty, but because industrialization (contrasted with crippling and laborious work on a rice paddy) offers a chance for more pay, more reliable income, and the chance to enjoy a surplus for the first time in their lives.

Francis looks around the world and still sees many people in grinding poverty and subject to the tenuousness of life that has marked life for all of humanity for most of its existence. No serious person denies these things exist. What Francis proposes now, however, is a plan to hobble the institutions that provide the remedy.

And, ultimately, Francis’s pessimism leads him to his turn toward politics and government. If you believe we are in the midst of an unprecedented crisis, then it makes more sense to hit the panic button and turn the world over to “experts” who will turn things around. Thus, we find in Francis’s work a call for governments, through coercion, to rid the world of pollution, to make the poor rich, and the weak strong.

But what a contrast this presents to Francis’s predecessor John Paul II (who was known for his optimism). Francis turns to human institutions, and new human programs, new human experts, and new human initiatives to solve the world’s problems. John Paul II, however, took a much different position, writing in a 2000 document:

We put the question with trusting optimism, but without underestimating the problems we face. We are certainly not seduced by the naïve expectation that, faced with the great challenges of our time, we shall find some magic formula. No, we shall not be saved by a formula but by a Person ... [i.e., Jesus].

It is not therefore a matter of inventing a "new programme." The programme already exists: it is the plan found in the Gospel and in the living Tradition, it is the same as ever.

Note the prevalence of religious language; one need not be a Christian to see the contrast here. John Paul II, as a religious leader, encourages his audience (in a recurring theme in his writings) to turn to personal virtue as the solution to the ills of the world. Francis, on the other hand, looks to political institutions in both of his major writings.

Francis is following a specific secular narrative in which so-called “neoliberalism” has robbed the world of its supposed natural abundance and mildness. In his misguided pessimistic nostalgia, he then turns to undoing the material gains of recent centuries through government action. It’s an unfortunate position, and one that does not suit a religious leader well.