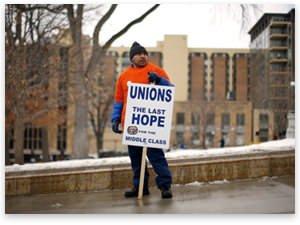 When the employees of a grocery store, for example, go on strike and shut down the store, consumers can simply shop elsewhere, and the grocery-store management is perfectly free to hire replacement workers. In contrast, when a city teachers' or garbage-truck drivers' union goes on strike, there is no school and no garbage collection as long as the strike goes on. In addition, teachers' tenure (typically after two or three years in government schools) and civil-service regulations make it extremely costly if not virtually impossible to hire replacement workers.

Thus, when government bureaucrats go on strike they have the ability to completely shut down the entire "industry" they "work" in indefinitely. The taxpayers will complain bitterly about the absence of schools and garbage collection, forcing the mayor, governor, or city councillors to quickly cave in to the union's demands to avoid risking the loss of their own jobs due to voter dissatisfaction. This process is the primary reason why, in general, the expenses of state and local governments have skyrocketed year in and year out, while the "production" of government employees declines.

For decades, researchers have noted that the more money that is spent per pupil in the government schools, the worse is the performance of the students. Similar outcomes are prevalent in all other areas of government "service." As Milton Friedman once wrote, government bureaucracies — especially unionized ones — are like economic black holes where increased "inputs" lead to declining "outputs." The more that is spent on government schools, the less educated are the students. The more that is spent on welfare, the more poverty there is, and so on. This of course is the exact opposite of normal economic life in the private sector, where increased inputs lead to more products and services, not fewer.

Thirty years ago, the economist Sharon Smith was publishing research showing that government employees were paid as much as 40 percent more than comparable private-sector employees. If anything, that wage premium has likely increased.

Politicians are caught in a political bind by government-employee unions: if they cave in to their wage demands and raise taxes to finance them, then they increase the chances of being kicked out of office themselves in the next election. The "solution" to this dilemma has been to offer government-employee unions moderate wage increases but spectacular pension promises. This allows politicians to pander to the unions but defer the costs to the future, long after the panderers are retired from politics.

As taxpayers in California, Wisconsin, Indiana, and many other states are realizing, the future has arrived. The Wall Street Journal reports that state and local governments in the United States currently have $3.5 trillion in unfunded pension liabilities. They must either raise taxes dramatically to fund these liabilities, as some have already done, or drastically cut back or eliminate government-employee pensions.

Government-employee unions are primarily interested in maximizing the profits of the union. Consequently, they use civil-service regulations as a tool to protect the job of every last government bureaucrat, no matter how incompetent or irresponsible he or she is. Fewer employed bureaucrats means fewer union dues are being paid. Thus, it is almost guaranteed that government-employee unions will challenge in court the attempted dismissal of all bureaucrats save the occasional ones who are accused of actual criminal behavior. This means that firing an incompetent government school teacher, for example, can take months, or years, of legal wrangling.

Politicians discovered long ago that the most convenient response to this dilemma is to actually reward the incompetent bureaucrat with an administrative job that he or she will gladly accept, along with its higher pay and perks. That solves the problem of parents who complain that their children's math teacher cannot do math, while eliminating the possibility of a lawsuit by the union. This is why government-school administrative offices are bloated bureaucratic monstrosities filled with teachers who can't teach and are given the responsibilities of "administering" the entire school system instead. No private-sector school could survive with such a perverse policy.

Government-employee unions are also champions of "featherbedding" — the union practice of forcing employers to hire more than the number of people necessary to do the job. If this occurs in the private sector, the higher wage costs will make the firm less competitive and less profitable. It may even go bankrupt, as the heavily unionized American steel, automobile, and textile industries learned decades ago.

No such thing happens in government, where there are no profit-and-loss statements, in an accounting sense, and most agencies are monopolies anyway. Featherbedding in the government sector is viewed as a benefit to both politicians and unions — but certainly not to taxpayers. The unions collect more union dues with more government employees, while the politicians get to hand out more patronage jobs. Each patronage job is usually worth two or more votes, since the government employee can always be counted on to get at least one family member or close friend to vote for the politician who gave him the job. This is why, in the vast literature showing the superior efficiency of private versus government enterprises, government almost always has higher labor costs for the same functions.

Every government-employee union is a political machine that lobbies relentlessly for higher taxes, increased government spending, more featherbedding, and more pension promises – while demonizing hesitant taxpayers as uncaring enemies of children, the elderly, and the poor (who are purportedly "served" by the government bureaucrats the unions represent).

It is the old socialist trick that Frédéric Bastiat wrote about in his famous essay, The Law: The unions view advocates of school privatization, not as legitimate critics of a failed system, but as haters of children. And the unions treat critics of the welfare state, not as persons concerned with the destruction of the work ethic and of the family that has been caused by the welfare state, but as enemies of the poor.

This charade is over. American taxpayers finally seem to be aware that they are the servants, not the masters, of government at all levels. Government-employee unions have played a key role in causing bankruptcy in most American states, and their pleas for more bailouts financed by endless tax increases are finally ringing hollow.