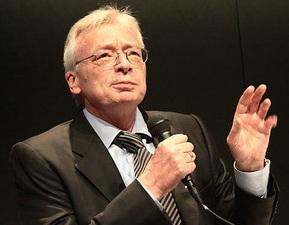 The following interview with Hans-Hermann Hoppe first appeared in the German weekly Junge Freiheit on November 2, 2012, and was conducted by Moritz Schwarz. It has been translated here into English by Robert Groezinger.

Are taxes nothing but protection money? The state a kind of mafia? Democracy a fraud? Philosopher Hans-Hermann Hoppe is not only considered one of the most prominent pioneering intellectuals of the libertarian movement, but also perhaps the sharpest critic of the Western political system.

Professor Hoppe, in your essay collection "Der Wettbewerb der Gauner" ("The Competition of Crooks") you write that "99 percent of citizens, asked if the state was necessary, would answer yes." Me too! Why am I wrong?

Hoppe : All of us, from childhood, have been moulded by state or state-licensed institutions—preschools, schools, universities. So the result you quoted is not surprising. However, if I asked you whether you said yes to an institution having the last word in each conflict, even in those it is itself involved in, you would certainly say no—unless you hoped to be in charge of this institution yourself.

Hoppe : Of course, because you know that such an institution cannot only mediate in conflicts but also cause them, you can recognize that it can then resolve them to its own advantage. In the face of this I, for one, would live in fear of my life and property. However, it is precisely this, the ultimate power of judicial decision-making, that is the specific characteristic of the institution known as the state.

Correct, but on the other hand the state is based on a social contract, which provides the individual with protection and space for personal fulfilment, which without the state he would not have—in a struggle of all against all.

Hoppe : No, the state is anything but the result of a contract! No one with even just an ounce of common sense would agree to such a contract. I have a lot of contracts in my files, but nowhere is there one like this. The state is the result of aggressive force and subjugation. It has evolved without contractual foundation, just like a gang of protection racketeers. And concerning the struggle of all against all: that is a myth. Of course the racketeer protects his victims on “his” territory from other racketeers, but only so he can conduct his own racket more successfully. Moreover, it is states that are responsible for the deaths of hundreds of millions of people and immeasurable destruction in the 20th century alone. Compared to that, the victims of private crimes are almost negligible. And do you seriously believe that conflicts between the inhabitants of the tri-border region [of France, Germany and Switzerland] near Basle, who are living together in a condition of anarchy, are more numerous than conflicts between the inhabitants of Dortmund and Düsseldorf, who are citizens of one and the same state [Germany]? Not that I know of.

Why in your view is democracy just a “competition of crooks”?

Hoppe : All highly-developed forms of religion forbid the coveting of someone else’s property. This prohibition is the foundation of peaceful cooperation. In a democracy, on the other hand, anyone can covet anybody else’s property and act according to his desire—the only precondition being that he can gain access to the corridors of power. Thus, under democratic conditions, everybody becomes a potential threat. And during mass elections what tends to happen is that the members of society who attempt to access the corridors of power and rise to the highest positions are those who have no moral inhibitions about misappropriating other people’s property: habitual amoralists who are particularly talented in forging majorities out of a multitude of unbridled and mutually exclusive demands.

"Politicians: lazy and spongers!" Aren’t you afraid you might be reproached for complaining on the level of the "Bild" tabloid newspaper?

Hoppe: So what? Up until the 20th century there was hardly an important political thinker who didn’t speak disparagingly about democracy. The key word was: "mob rule." The populist criticism of democracy, as can be found in Bild or at the water cooler, is all very well. But it is not fundamental enough, nor does it go far enough—to date Bild hasn’t asked me for an interview either. Of course politicians are spongers; they live off money extorted from other people with the threat of violence—which is called "taxation." But unfortunately, politicians are not lazy. It would be nice if all they did was squander their booty. Instead they are obsessive megalomaniacal do-gooders, who in addition make life difficult for their victims with thousands of laws and regulations.

Democracy is only one possible variety of statehood. Would a different form of state be more acceptable to you?

Hoppe: In a monarchist state everyone knows who the ruler is and who the ruled are, and accordingly there is resistance against any attempt to increase state power. In a democratic state this distinction becomes blurred, and it becomes all the easier to expand state power.

Just a moment: that’s what courts, laws and the constitution are for, to limit and control the state—government as well as parliament.

Hoppe : The mafia also has “executive”, “legislative” and “judicial” branches. Just go and watch the movie “The Godfather” again!

Another objection: What about the new internet-based detractors of the state, such as "Occupy" or the "Pirates," who demand transparency and participation, without immediately condemning the state and democracy in their entirety?

Hoppe : The "Occupy" movement consists of economic ignoramuses who fail to understand that the banks’ dirty tricks, which they rightly deplore, are possible only because there is a state-licensed central bank that acts as a “lender of last resort,” and that the current financial crisis therefore is not a crisis of capitalism but a crisis of statism. The "Pirates," with their demand for an unconditional basic income, are well on the way to becoming another "free beer for all" party. They have a single issue: criticism of "intellectual property rights" (IP rights), which could make them very popular—and earn them the enmity in particular of the music, film and pharmaceutical industries. But even there they are clueless wimps. They just need to google Stephan Kinsella. Then they’d see that IP has nothing to do with property, but rather with state privileges. IP allows the inventor (I) or ‘first maker’ of a product—a text, picture, song or whatever—to forbid all other people to replicate this product, or to charge them license fees, even if the replicator (R) thereby uses his own property only (and does not take away any of I’s property). This way, I is elevated to the status of co-owner of R’s property. This shows: IP rights are not property but, on the contrary, are an attack on property and therefore completely illegitimate.

In "The Competition of Crooks" you outline as an alternative the model of a "private law society." How does it work?

Hoppe: The basic concept is simple. The idea of a monopolistic property protector and law keeper is self-contradictory. This monopolist, whether king or president, will always be an expropriating property protector and a law-breaking law keeper—who will characterize his actions as being in "the public interest." In order to guarantee the protection of property and safeguard the law there has to be free competition in the area of law as well. Other institutions apart from the state must be allowed to provide property and law protection services. The state then becomes a normal subject of private law, on an equal footing with all other people. It can’t raise taxes any more or unilaterally enact laws. Its employees will have to finance themselves just the same as everybody else does: by producing and offering something that freely engaging customers consider value for money.

Wouldn’t that quickly lead to a war between these "providers?"

Hoppe: War and aggression are costly. States go to war because they can, via taxes, pass on the cost to third parties who are not directly involved. By contrast, for voluntarily-financed companies, war is economic suicide. As a private law subject the state too will, like all other security providers, have to offer its customers contracts that can only be changed by mutual agreement, and which in particular regulate what is to be done in the case of a conflict between itself and its customers, or between itself and the customers of other, competing security providers. And for that there is only one solution acceptable to everyone: that in these sorts of conflicts not the state, but an independent third party decides—arbitrators and judges who in turn compete with each other, whose most important asset is their reputation as keepers of the law, and whose actions and judgments can be challenged and, if need be, revised, just as anyone else’s can be.

Who should be such a "third party?" And with what instruments of power should it assert the interests of an individual citizen against his contractual partner—the private state, which of course is much more powerful?

Hoppe: In local conflicts, in a village or a small town, these will very often be universally respected "natural aristocrats." Or else, arbitrating organisations and courts of appeal, which insurers and insured have contractually agreed on from the start. Whoever then does not abide by the judgments will not only be defaulting, he will become a pariah in the world of business. Nobody will want to have anything to do with him, and he will immediately lose all his customers. This is no utopian idea. This is already the usual practice in international—anarchical—business transactions today. And another question for you: How should the individual citizen assert his interests in the face of a monopolistic tax-state? It is much more powerful—and always has the last word!

Do you understand the continuing scepticism with regard to your proposition?

Hoppe : Of course, as most people have never heard of this idea, let alone thought about it seriously. I am only unsympathetic towards those who yell out at the top of their voices when they hear this idea and demand the condemnation of its representatives, without having the least knowledge of economics and political philosophy.

It is hardly likely that a majority of citizens will ever support such an unfamiliar model. But what parts of it at least could be adopted, in order to achieve at least partial improvements of our current system, without a complete abandonment of state and democracy?

Hoppe : There is an interim solution. It’s called secession and political decentralization. Small states must be libertarian, otherwise the productive people will desert them. Desirable therefore is a world made up of thousands of Liechtensteins, Singapores and Hong Kongs. In contrast, a European central government—and even more so a world government—with a "harmonized" tax and regulation policy, is the gravest threat to freedom.

For that too you will probably not find a majority. Therefore how will state and democracy develop in future? Where will we finally end up?

Hoppe : The Western "welfare state model," "socialism light," will collapse just like "classical" socialism—of course, I can’t say whether in five, ten or 15 years. The key words are: state bankruptcy, hyperinflation, currency reform and violent distribution battles. Then it will either come to a call for a "strong man" or—hopefully—a massive secession movement.