GET NEWS AND ARTICLES IN YOUR INBOXPrint
A
A
Home | Mises Library | Obama's Patent Reform: Improvement or Continuing Calamity? 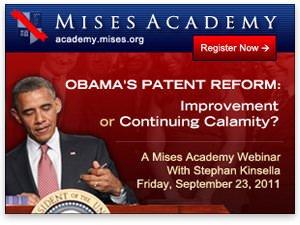 It's increasingly recognized that our current patent system is "broken."1 Billions are paid in ransom to patent aggressors. Patent lawyers are enriched. Patent trolls have emerged. Competitors, like Android smartphones and tablets, are shut down or delayed by entrenched patent oligopolists. While some confused souls argue that patents create jobs and innovation and can even stimulate the economy,2 more and more people have begun to realize that patents do not foster innovation but rather stifle it.3

So it's no surprise that we've seen a chorus of demands for "patent reform."4 But these proposed reforms do not call for eliminating the patent injunction, for seriously cutting back patent scope, or for reducing the patent term. These are all sacrosanct. As I explained in "Radical Patent Reform Is Not on the Way," mainstream proposals for patent reform merely adjust minor details and leave the essential features of the patent system intact.

What are we to make then of the America Invents Act, signed into law last Friday by President Obama? It's been hailed by some as a major improvement, and reviled by others.5

The patent bar is already buzzing about the new patent law and preparing seminars and explanations,6 and there have been a number of early criticisms of the patent reform law proffered already.7

This Friday's Mises Academy Webinar will discuss the new patent-reform law. Is it a real improvement in the law? Does it make things worse? Why should businesses care? In this timely webinar I will

As both proponents and opponents of patent law recognize, these issues are of crucial importance for innovation and our economy. If you are interested in learning about the current direction of patent policy.