A Note on the Supposed Independence of the Fed 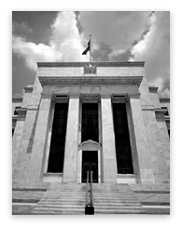 Congressmen Ron Paul and Alan Grayson seek to bring more transparency and accountability to the U.S. central bank and "to subject the Fed's monetary policy and discount-lending actions to an audit by the Government Accounting Office (GAO)."

In opposition to these efforts to audit the Federal Reserve System, some 270 economists [XLS] have signed an "Open Letter" [DOC] arguing that "Economic theory and a massive body of empirical evidence provide strong support for the independence of central banks in their conduct of monetary policy."

We beg to differ. Economic theory suggests that unaccountable, legally protected monopolies are inefficient. Without monitoring, governance, competition, and feedback such organizations make bad decisions and tend to be captured by special interests. Why should central banks be any different?

Empirical evidence suggests that unaccountable central banks misallocate resources and retard economic growth. Since 1913, the year the Fed was created, the dollar has lost 95% of its value. Easy credit from the Fed has made the US economy debt-dependent. It has encouraged irresponsible investment on financial markets and elsewhere. It has redistributed real incomes on a massive scale from the general population to the Fed’s main business partners: banks, financial firms, and government. It has not stabilized the American economy, but has made it much more fragile and prone to severe crises such as the present one. Put simply: the Fed is a government central planning agency, and it performs about as well as every government central planning agency in history.

Banking – whether commercial banking or central banking – works best when it is competitive, transparent, and responsible. The more central banking is shielded from public scrutiny and protected from the rule of civil law, the more damaging it becomes for the economy and society.

The Fed is in need of serious reform and should be subject to competition and accountability. The Paul-Grayson bill is a welcome first step toward this goal. American citizens have a right to demand the same standards of transparency and responsibility from the Fed as other government agencies. A government bureaucracy that cannot function unless it is shrouded in secrecy and is not held accountable to the elected representatives of the people has no place in a free society.