GET NEWS AND ARTICLES IN YOUR INBOXPrint
A
A
Home | Mises Library | Mises: The Last Knight of Liberalism

Mises: The Last Knight of Liberalism 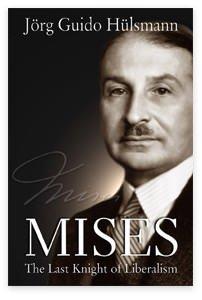 Tags BiographiesAustrian Economics OverviewHistory of the Austrian School of EconomicsPraxeology

[Here is the preface to Mises: The Last Knight of Liberalism (Mises Institute, 2007).]

In the summer of 1940, with Hitler's troops moving through France to encircle Switzerland, Ludwig von Mises sat beside his wife Margit on a bus filled with Jews fleeing Europe. To avoid capture, the bus driver took back roads through the French countryside, stopping to ask locals if the Germans had been spotted ahead — reversing and finding alternative routes if they had been.

Mises was two months shy of his fifty-ninth birthday. He had left Vienna some years earlier, escaping only days before the Nazis ransacked his apartment, confiscated his records, and froze his assets. He had hoped to be safe in Geneva. Now nowhere in Europe seemed safe. Not only was he a prominent intellectual of Jewish descent; he was widely known to be an archenemy of National Socialism and of every other form of socialism. Some called him "The Last Knight of Liberalism."

Failing to catch him in Vienna, the Nazis tried to snatch him in Switzerland. Again they did not succeed. Mises did not assume his luck would last.

He had personally steered Austria away from Bolshevism, saved his country from the level of hyperinflation that destroyed interwar Germany, and convinced a generation of young socialist intellectuals to embrace the market. Now he was a political refugee headed for a foreign continent.

The couple arrived in the United States with barely any money and no prospects for income. Mises's former students and disciples had found prestigious positions in British and American universities (often with his help), but Mises himself was considered an anachronism. In an age of growing government and central planning, he was a defender of private property and an opponent of all government intervention in the economy. Perhaps worst of all, he was a proponent of verbal logic and deductive social science in an era of empiricism, positivism, and abstract mathematical models. No university would have him. Margit began to train as a secretary.

Over the next decade, they would slowly rebuild and Mises would find new allies. He would also publish his most important book, Human Action. It would earn him a following whose admiration and devotion were beyond anything he had known in Europe.

When he died in October 1973, he had only a small circle of admirers and disciples, but this group became the nucleus of a movement that has grown exponentially. Today his writings inspire economists and libertarians throughout the world, and are avidly read by an increasing number of students in all the social sciences. There is an entire school of "Misesian" economists flourishing most notably in the United States, but also in Spain, France, the Czech Republic, Argentina, Romania, and Italy. This movement is testimony to the lasting power and impact of his ideas.

Once a student of the historical method in the social sciences, he would become the dean of the opposition Austrian School and humanistic social theory. He went from left-leaning young idealist in Vienna to grand old man of the American Right. Dismissive of "the metallists" early in his career, he became an unwavering spokesman for a 100% gold standard. He even went from being the most radical free market liberal in Europe to being a libertarian leader in America whose students and followers would consider him too soft on government. His legacy would be a movement some of whose members would take Mises's message and his method further than Mises himself would go.

The portrait of Ludwig von Mises offered here is primarily concerned with his intellectual development in the context of his time. Not much is known about the emotional layer of his personality. Early on he conceived of himself as a public persona: Professor Mises. He took great care to destroy any evidence — from receipts to love letters — anything that could have been useful to potential opponents. We can report on some of the more intimate episodes of his life only because of the private records stolen from his Vienna apartment by the Nazis in March of 1938. These documents eventually fell into the hands of the Red Army, were rediscovered in a secret Moscow archive in 1991, and have been a precious source of information for the present work.

Those who love ideas — especially those who believe that ideas shape our world — may find the following pages worthwhile reading. If it does no more than raise further interest in Ludwig von Mises and his work, this book will have attained its goal.