McDonald's as the Paradigm of Progress 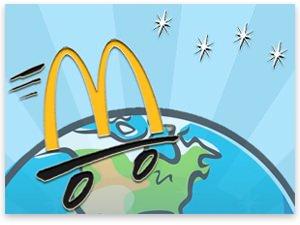 The nice folks at the local McDonald's know me well, but even they were puzzled when I snapped a dozen images of their newly restored interior, which is absolutely beautiful. Like most fast-food places, the management is used to customers but still a bit surprised by dedicated fans like me.

I feel vindicated by recent data on this company's hiring in the midst of terrible economic times.

The national labor-participation rate has been falling for a decade and is now as low as it was during the 1982 recession. If people were leaving the workplace with wads of cash and every intention of living out their dream of a life of leisure, this might be good news.

Sadly, all evidence runs the other direction. People want remunerative work but can't find it, and their situation is getting worse not better, thanks mainly to legal restrictions and artificial burdens borne by institutions that would otherwise be hiring.

McDonald's appears to be responsible for more than half the new jobs being created right now: its April jobs fair added 30,000 people to its payrolls. It has bucked the trend — a bit like swimming against the tide.

But instead of congratulating this great company for doing the impossible, the judgment in the press is harsh. Burger flipping is the only work to be had out there? Surely this is evidence of how pathetic economic growth is.

The trouble with this line is that it doesn't recognize how difficult it is for an institution to adapt itself and still grow in this climate. And how does McDonald's do it? It is an old recipe: watch the markets, emulate the successful, adapt and change, and slavishly serve the consuming public.

The reinvention of McDonald's began only two years ago, as its management noted the new vogue for healthy food and fancy coffees and fruit smoothies served up in a posh environment such as Starbucks offers. Can McDonald's, the very embodiment of the lowbrow urge for a greasy burger and fries, actually horn in on this market?

It doesn't seem likely, but the company gave it a try. There were new breakfast items like fruit parfaits. There was an apple-and-walnuts salad, along with many other premium salads, for lunch. There was a new premium burger made of Angus beef (which to me tastes as good as a restaurant-style burger). There were new fruit smoothies that taste as good (or better) than the ones that cost twice as much at the hip smoothie bars.

Not that McDonald's merely chases public fads. The company responded to an earlier outcry for diet food by making the McLean sandwich in the mid 1990s. No one bought it. The company dropped it from the menu. The lesson is that public piety is not the same thing as actual spending habits. Future development would be rooted in reality, and it certainly is today.

Most of all there was the addition of new coffee drinks. Each is made from freshly ground beans, with the addition of fresh milk (whole or low fat), all made upon order. McDonald's added its own spin. The most annoying aspect of Starbucks, as everyone knows, is the wait. Everything is done by hand, from the cleaning to the packing of grounds.

McDonald's has a new machine that does everything. The beans fall through a large funnel. The milk is sucked out of gallons from the doors underneath. The nozzles and containers are cleaned after each drink by superhot steam blasts. The human hand only gets involved at the beginning to push buttons and at the end to give it all one last stir. The time it takes to make this fresh treat is reduced to half or even one-third of the Starbucks time.

Then there is the cost issue. A latte at McDonald's costs 40 percent less than the same at Starbucks. And you don't have to use strange words like venti or grande when you order. At McDonald's, they seem to understand normal English words like small, medium, and large.

There was just one element of change missing: the interior of the restaurants. Mostly they have been unchanged for decades. The dining room was filled with tables with a fixed number of attached chairs, suggestive of a school cafeteria. The company did its research and rethought the entire issue of what a fast-food dining area could look like.

In the same space, it created many different styles: a round booth, long tables with movable chairs, small round tables with bar-style seating, along with traditional booths. Each place you sit amounts to a separate environment of your own choosing. You can be private or sociable, intimate or public, alone or engaged with others. The seating area is separated from the ordering area by Plexiglas sheets from floor to ceiling that appear both modern and artistic. I don't know much about the art of interior design, but the whole scheme strikes me as brilliant.

So certain is the company that these changes are going to make a difference, it is spending a minimum of $1 billion on the renovations in all 14,000 US restaurants. The first 800 will be complete in 2011, costing some $250,000 per store. Our own local restaurant started renovations in early June and completed them in a mere two weeks time — all the while keeping the drive-through window open and doing a vigorous business.

And what is the point of all of this? It should be obvious: to serve the public better. Better service, more attractive environments, and more menu choice lead to higher profits, and therefore more expansion and job creation.

In a striking way, this approach is deeply embedded in the company's history. The first restaurant opened in 1940 and closed for renovations in 1948, only to reopen as the first drive-through restaurant. Its first indoor-seating restaurant didn't open until 1962. Since then, the company has taken glorious steps forward that have foreshadowed global change: it opened in Moscow in 1990, Warsaw in 1992, and on the Web in 1996.

Let's be clear here. It's not the case that the management of this company has an unusually high devotion to the well-being of humanity. The management is following the pricing signals and making entrepreneurial judgments all in the service of the consuming public. It is a great competitor, relentlessly reinventing itself in an effort to win the affections of the eating-out public.

The managers here might be the greatest humanitarians in history or they might be the greediest and most selfish people on earth. It really doesn't matter. The market is the driving force and the profitability signals are the test of whether the company is or is not doing the right thing. This is the very heartbeat of the capitalistic process — the one spotted and dissected centuries ago by economists in France, Spain, Italy, and England.

These old liberals saw that the capitalistic process is the answer to the great social and moral problems raised by thinkers of all ages precisely because it pours every manner of human motivation into the grand project of satisfying the needs and wants of all society's members. If economic science had one main point to contribute to the world of ideas, this was it.

A most impressive feature of capitalism that is highlighted in the McDonald's case is how its institutions so beautifully adapt themselves to change. The drift is always upward: new and improved. And this drift is like a wind that never stops blowing unless it is stopped by the organized force of the state.

When the reinvention of this company began in 2009, it was not preceded by national campaigns and platforms. There were no public votes. Billions were not spent on lobbying for change. There were no public debates, advertising campaigns, frenzied conventions, or door-to-door campaigning. It was a decision made by the management — an entrepreneurial judgment that could be right or could be wrong — in an effort to please the stockholders who are the owners. And the final test is always the same: are people willing to buy?

Meanwhile, in the world of politics, decade after decade goes by with endless rounds of "reinventing government," school reform, bureaucratic reform, rearrangement of spending priorities, and regulatory change to make stuff work better. In the end, it amounts to little or nothing. Crucially, there is no real test to determine whether these changes were worth the cost or whether they really accomplished the goal. In politics, it is not even clear what the goal is! And, of course, the result is predictable. There is no change, no reinvention, no real improvement.

The addition or removal of the king-consumer from the process of reform amounts to a fundamental change in the whole raison d'être of an institution. It's true that McDonald's is not entirely sustained by the market alone, and even overly scrupulous libertarians have jumped on the attack. It's true that it has been reported that some of its business loans were backed by TARP money after the crisis of 2008, and, of course, it benefits indirectly from subsidies on corn and the like.

By the same token, it is also wickedly punished by the state, paying 30 percent taxes on earnings and shoveling some $2 billion into the federal treasury every year — all money that might otherwise be used for capital upgrades, dividends, or expansions.

The crucial way to tell a predominantly market-based company from a state-based company is to investigate its primary institutional interest: does it serve the state or does it serve the consuming public? There can be no question where McDonald's is on this spectrum, and the result is not just a beautiful model for serving up food but a beautiful model for social service in general.

McDonald's is a prime example of how the market has overcome a fundamental human problem: getting enough to eat. This is a problem that vexed the whole of humanity from the beginning of time. Now it appears to be almost entirely solved, thanks to institutions such as McDonald's, which people feel entitled to criticize and smear because they seem to be such a fixed element in the universe.

"It is a constant struggle to stay on top in this world in which every success can be imitated by a competitor."

But such institutions are not fixed. They are not permanent. They are the result of wild entrepreneurship embedded in a global market order rooted in ownership, exchange, freely floating prices, and human cooperation. It is a constant struggle to stay on top in this world in which every success can be imitated by a competitor, where consumers are as fickle as they want to be, and where even the best entrepreneur can make terrible mistakes.

This market is so robust, so vigorous, so innovative, that it even overcomes every obstacle that the anachronistic state puts in its way. Despite it all, McDonald's is hiring: people helping people get by and even live better.

The market blesses us every day, and society responds by, on the one hand, snobbishly cursing its productivity over cocktails, and, on the other hand, grabbing a value meal from the drive-through on the way home.