GET NEWS AND ARTICLES IN YOUR INBOXPrint
A
A
Home | Mises Library | Markets Restrain Bank Fraud, But Central Banks Enable It 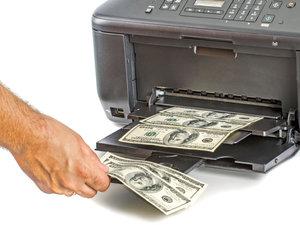 Paper certificates that are accepted as the medium of exchange open the scope for fraudulent practices. Banks could now be tempted to boost their profits by lending certificates that were not covered by gold. In a free-market economy, a bank that overissues paper certificates will quickly find out that the exchange value of its certificates in terms of goods and services will fall. To protect their purchasing power, holders of the overi-ssued certificates naturally attempt to convert them back to gold. If all of them were to demand gold back at the same time, this would bankrupt the bank. In a free market then, the threat of bankruptcy would restrain banks from issuing paper certificates unbacked by gold. Mises wrote on this in Human Action,

People often refer to the dictum of an anonymous American quoted by Tooke: "Free trade in banking is free trade in swindling." However, freedom in the issuance of banknotes would have narrowed down the use of banknotes considerably if it had not entirely suppressed it. It was this idea which Cernuschi advanced in the hearings of the French Banking Inquiry on October 24, 1865: "I believe that what is called freedom of banking would result in a total suppression of banknotes in France. I want to give everybody the right to issue banknotes so that nobody should take any banknotes any longer."

This means that in a free-market economy, paper money cannot assume a "life of its own" and become independent of commodity money.

To prevent such a breakdown, the supply of the paper money must be managed. The main purpose of managing the supply is to prevent various competing banks from overissuing paper certificates and from bankrupting each other. This can be achieved by establishing a monopoly bank, i.e., a central bank-that manages the expansion of paper money.

The central bank paper money, which is declared as the legal tender, also serves as a reserve asset for banks. This enables the central bank to set a limit on the credit expansion by the banking system. Note that through ongoing monetary management, i.e., monetary pumping, the central bank makes sure that all the banks can engage jointly in the expansion of credit out of “thin air” via the practice of fractional reserve banking. The joint expansion in turn guarantees that checks presented for redemption by banks to each other are netted out, because the redemption of each will cancel the other redemption out. In short, by means of monetary injections, the central bank makes sure that the banking system is "liquid enough" so that banks will not bankrupt each other.

Central Banks Take Over Where Inflationist Private Banks Left Off

Observe that while, in the free market, people will not accept a commodity as money if its purchasing power is subject to a persistent decline. In the present environment, however, central authorities make it impractical to use any currency other than dollars even if suffering from a steady decline in its purchasing power.

In this environment, the central bank can keep the present paper standard going as long as the pool of real wealth is still expanding. Once the pool begins to stagnate — or, worse, shrinks — then no monetary pumping will be able to prevent the plunge of the system. A better solution is of course to have a true free market and allow commodity money to assert its monetary role.

As opposed to the present monetary system in the framework of a commodity-money standard, money cannot disappear and set in motion the menace of the boom-bust cycles. In fractional reserve banking, when money is repaid and the bank doesn’t renew the loan, money evaporates (leading to a bust). Because the loan has originated out of nothing, it obviously couldn’t have had an owner. In a free market, in contrast, when true commodity money is repaid, it is passed back to the original lender; the money stock stays intact.