Letter from an Austrian in Austria 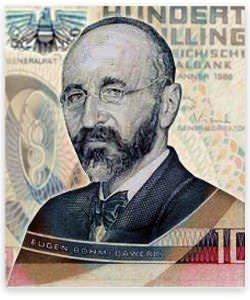 As an enthusiastic reader of Mises.org, I sometimes feel schizophrenic. Not because I think the economic theory of the Austrian School is in any way unsound. I am an Austrian. But that's just it. I am an Austrian who lives in Austria. I know Austrian economics in practice as well as in theory.

Allow me to share with my fellow "Austrians" a brief glimpse of the real Austria.

Once upon a time, before the days of the euro, banknotes in Austria bore the portraits of the great sons and daughters of our country. The 100-schilling note was covered with the portrait of Eugen von Böhm-Bawerk.

I looked at an old note and asked myself, What was it that made him so great?

Try to find someone in present-day Vienna who is familiar with the exceptional work of this former finance minister of the Austrian monarchy. Even worse: try to find a copy of his seminal Kapital und Kapitalzins. You will search the bookstores in vain. I did.

I had to read it in English — I found a PDF on an American server. (The same is true of Ayn Rand's Atlas Shrugged: a German version of this novel can be found, at best, buried somewhere in the back of an antiquarian bookshop.)

I devoured the books of Böhm-Bawerk. What next? I found a tiny clue in one Austrian newspaper. The article claimed that more and more economists are returning to the theories of Ludwig von Mises.

So I read Human Action, of course, and followed my study with Hayek's Prices and Production. What excellent stuff that was! I learned that the money supply (Böhm-Bawerk would have said Subsistenzfonds) is critical for defining the natural rate of interest and that inflation can only happen with an increase in the money supply.

No new money, no general rise in prices.

What is true of prices in general is true of stock prices, too. Austrian tax law recognizes this implicitly: Any profit earned within the first year of a stock purchase is taxed. Thereafter, any rise in the nominal price of a stock is "free" — stock-market gains are untaxed.

In 2011 this sound policy will be changed. Every speculation profit will be taxed at 25 percent. And the Social Democrats still aren't satisfied: They are very eager to establish a fee for every stock transaction and are calling for a blatant extra tax on wealthy people. The proposal is that every fortune above €1 million should be taxed with an additional .5 to 1 percent. It would be a pure killing of savings and investments — Hayek would say a shortening in the length of production. Well, something has to pay for Austria's welfare state!

Austria already has one of the highest tax burdens in Europe. The state is controlling no less than 44 percent of the about €300 billion of GDP. This means, considering all the other state burdens like value-added taxes (20 percent), the gasoline tax, energy fees, alcohol and tobacco taxes, and so forth, that if you are fortunate enough to be in the highest income-tax bracket you will pay about 70 percent of your income to the state.

Uproar in the Parliament

Austria has a five-party democracy and still enjoys a triple-A credit rating. But what does the blessing of democracy really mean? It means robbing the many to pay the few. Here are some facts:

I could go on about labor unions, the state of public education, and — above all — the sanctity of export-driven economic growth, but you get the idea.

The Restaurant Pays Its Customers

Naturally, we had a few bailouts too. The overexpanded banks (especially Raiffeisen International, Erste Bank, and Hypo Alpe Adria Bank) were deemed too big to fail.

The Austrian financial sector is, together with that of Germany and France, the biggest financer in eastern and southern Europe. That is, they are heavily invested in government bonds in these countries or are — via subsidies — the vehicles with which direct investments in these countries can easily be transacted. The funds for all this spending come from the European Central Bank, which continues to take huge amounts of government bonds as collateral.1

What is the consequence of all this new money created by the triple mechanism of government bond, commercial bank, and central bank?

The rich countries in Middle Europe (Austria, Germany, the Netherlands) need customers for their export-driven — but crisis-vulnerable — economy. The kick-off for the party is easy money from deficit spending — especially for the high-inflation countries like Portugal, Ireland, Italy, Greece, and Spain. It is as if a restaurant (middle Europe) with too few customers decided to finance the food and drink for new patrons (southern and eastern Europe).2

Nominally, the figures are certainly impressive. Wages are steadily climbing. GDP is growing. Even Austria's unemployment rate is one of the lowest in Europe (4.8 percent). No wonder a high official of the Social Democrats boasted recently that Austria is one of the five EU countries to master the economic crisis. He said, "Austro-Keynesianism was the right model for crisis fighting."

Need I remind you that even "official" figures are greatly misleading? For example, the retirement age is extremely low in Austria: the average man becomes a pensioner at the age of 58. So it is no wonder unemployment figures are low: the state is paying capable men to stay home. (Of course, the rent burden is becoming tremendous.)

And Austria's bureaucracy is entrenched and highly salaried, despite the fact that most of the decision making is already done at the EU level.

Well, it is easy to see: Böhm-Bawerk's portrait is no longer on Austria's money. There is nothing left of his brilliant spirit in the intellectual debate in Austria. And his successors — Mises, Hayek, Rothbard — are never mentioned in the official economic think tanks. Austria is just one more welfare state on its last legs.

Markus Zwettler works as a freelance writer in Vienna, Austria. After 13 years in journalism, he began to think beyond the state-driven propaganda. Mises.org was the catalyst in this transformation.