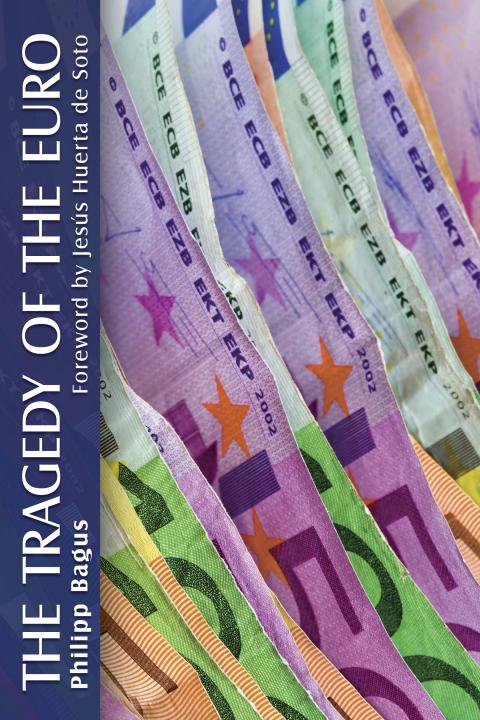 The Tragedy of the Euro.pdf

The Tragedy of the Euro.pdf

The Tragedy of Euro, Greek.pdf

The Tragedy of Euro, Greek.pdf

The Tragedy of the Euro.epub

The Tragedy of the Euro.epub

Philipp Bagus, professor of economics at Universidad Rey Juan Carlos in Madrid, is a young scholar with a large influence, having forecast all the problems with the Euro and having persuaded many economists on the Continent that this currency is no better than any fiat currency. In some ways it is much worse because it has cartelized the management of European monetary regimes and created a terrible moral hazard.

We often hear analysis of the workings of the Fed. Discussion of the European Central Bank is more rare. Bagus compares the two institutions to show a fundamental difference. Member states of the ECB can run deficits and expect them to be financed by the ECB. This is not true with the Fed. So Europe has a tragedy of the commons at work with its monetary policy that sets up very dangerous incentives for member states. For this reason, the system is unworkable.

With this book, Professor Bagus brings his scholarship to English readers, explaining the background to the idea of European unity and its heritage of sound money. He explains that the Euro is not what the older classical liberals had hoped for but instead is a politically managed money that is destined for failure.

He writes with a keen sense for economic analytics and empirical detail, offering one of the most accessible and yet rigorous accounts of the emergence of the Euro. He predicts its downfall due to political pressures, bad banking practices, and exploding public-sector liabilities.

The analogies with the dollar are indeed close, but with welfare states at a more advanced stage, it will be a race to see which paper currency will crumble first.

Professor Bagus brings theoretical power to investigating one of the most important topics in economics today. His arguments and evidence convinced even Jesus Huerta de Soto to withdraw support for the Euro. For this reason, de Soto has written the introduction to this important work.

Perhaps I lead a sheltered life, but I found The Tragedy of the Euro to read like a great adventure novel. Here we have heroes (mostly post war German bankers, resisting inflation) and villains (mostly post war Frenchmen, allied with post war German politicians, determined to keep the common German citizen paying and paying). The villains believe, falsely, that they can secure for all time their special privileges over the German citizenry—which is not the same as the German elite, who often collude with the French elite for their own privileges. But this is their great error, which Professor Bagus explains so clearly. They want to ignore the laws of economics by building coercive pan-European bureaucracies to enforce their will. But this will not work. How long it will last is the question. The European financial crisis proceeds from day to day. This wonderful book will help everyone understand what is really happening and, we hope, provide a lesson for others. —Patrick Barron

Philipp Bagus is professor at Universidad Rey Juan Carlos. He is a Fellow of the...

This three-lecture course presents a coherent Austrian economics approach to money and banking.

Bagus explains that the Euro is not what the older classical liberals had hoped for, but instead is a politically...