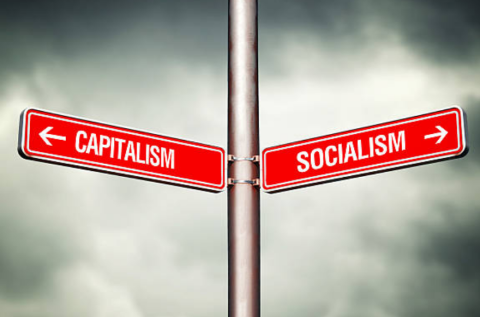 The World is locked today in a fierce war of ideologies, in some ways strangely resembling the wars of religion in the Middle Ages. The doctrinal points at issue in those wars have become unintelligible to most of us today, and there are some equally strange paradoxes in the present ideological war.

The Communists, who started it, not only know precisely what they are against — Capitalism — but precisely what they are for. On both questions the party line is laid down for them from the top. There can be no deviation, on pain of ostracism, penal servitude, torture, or death. But on the other side, most of those who do not accept Communism did not realize, until belatedly, that there even was an ideological war going on; and that no appeasement, no conciliation, no mutual attitude of live-and-let-live, was possible, because the Communists were determined from the start not to permit it. The non-Communists had no idea that they were engaged in a life-or-death struggle.

But this brings us to other paradoxes. The non-Communists are still not even united as anti-Communists. For there is still an influential group who say: "True, we should not allow the Russians to impose Communism on us, but neither should we try to impose our system on the Russians. Capitalism (or Democracy) is probably the best system for us, and Communism for them. If we stop arming against the Communists and talking against them, their suspicions will gradually dissolve, and each of us can live peaceably in his own way." This view persists, in spite of its untenability, mainly because it is a wish-fulfillment.

Moreover, even the anti-Communists are not united. They are all "against Communism." But they have no common definition or concept of Communism. Few of them realize that Communism is primarily an economic doctrine. Most of them regard it primarily as a political or a cultural system. What they hate about it is the despotism, the total suppression of freedom — political, religious, or artistic; the cruelties, the forced confessions, the systematic lying, spying, and plotting, the relentless campaigns of calumny, the existence or threat of military aggression.

All these things are indeed hateful. But what most anti-Communists still fail to see is that they are merely the inevitable consequences of the basic economic doctrine of Communism. These are what Karl Marx, writing of Capitalism, would have called the "superstructure."

The anti-Communists are also deeply divided in their ideas of the economic system they would prefer to Communism. They range from champions of the free market to left-wing Socialists, with every variety of New Dealer, planner, and statist in between. The New Dealers seem as eager to repudiate "laissez faire Capitalism" as they do Communism. And when it comes to the basic economic organization they propose, the Socialists are actually at one with the Communists against Capitalism.

These violent divisions within the ranks of the anti-Communists have led to conflicting ideas concerning the proper "strategy" against Communism. There are those who think that "anti-Communism" is itself a sufficient ground for unity. Communism, they say, is not a doctrine that needs to be dissected, but a conspiracy that needs to be suppressed. What we must do is to ferret out the Communists — in the government, in the armed forces, in the U.N., in the schools and colleges — expose them and get rid of them. Anything else, they contend, is either unimportant or a diversion.

There is another group that is not satisfied merely with being against Communism, which concedes that the opponents of Communism must have a common positive philosophy, but which thinks that belief in "Democracy" is enough. This has been substantially the position of the State Department and the Voice of America under Truman. It is the position of the major part of the American press.

It does not stand up under serious analysis. "Democracy" is one of those sweepingly vague words that mean too many things to different minds. It can be stretched or compressed, like an accordion, to meet the controversial needs of the moment. "Democracy" as a unifying concept has come to be, in fact, little better than a semantic evasion. To some it means a political system under which the government depends upon the uncoerced will of the people in such a way that it can be peaceably changed whenever the will of the people changes. To others it means anything down to a system of unrestrained mob rule in which everyone is declared by fiat to be equal in merit and influence to everyone else; in which a minority has no rights that a majority is bound to respect; in which anyone's property can be confiscated at will, and distributed to those who did nothing to earn it; in which incomes are to be equalized in spite of glaring inequalities in ability, effort, and contribution. This second concept of Democracy must lead inevitably into a Communist system and not toward a free one.

"Democracy," therefore, has not only come to be so vague as to be almost meaningless; it has lost nearly all its value even as a semantic weapon. The enemy has taken it over and used it for his own purposes. The Communists call their own system (tautologically but beguilingly) a "people's democracy," and argue that capitalist democracy is a contradiction in terms.

Even if the concept of "Democracy" did not suffer from a fatal ambiguity, it would still refer primarily to a political system. But Communism stands primarily for an economic system, of which the political accompaniment is mainly a consequent or superstructure. Therefore "Democracy" is in any case a false antithesis to Communism. It is like declaring west to be the opposite of north, or cold to be the opposite of black.

The true opposite of Communism is Capitalism. The Communists know it, but most of the rest of us don't.

This is the real reason for the ideological weakness of the opposition to Communism, and for the ineffectiveness of most of the propaganda against it — particularly the official propaganda, up to now, of the State Department and the Voice of America, and of the Western governments generally. All these set up "Democracy" as the antithesis of Communism, partly because they are confused enough to believe it is, and partly because they have neither the will nor the courage to defend Capitalism.

There are several reasons behind this reluctance. To begin with, the very word "Capitalism" was coined and given currency by Marx and Engels. It was deliberately devised as a smear word. It was meant to suggest what it probably still does suggest to most minds — a system developed by and for the capitalists.

The overwhelming majority of bureaucrats in the Western countries do not really believe in the basic principles of Capitalism. The economic freedom it involves is alien to their minds. It is not natural for the people in power in government to believe in less governmental power. Moreover, they do not really understand what makes Capitalism work, or what measures are conformable with it. Their natural tendency is to favor the incompatible system of the government handout. Hence they plump for huge foreign aid programs, Point Four, the International Monetary Fund, and interminable United Nations meddling. They do not realize that these measures and institutions actually retard or prevent the freedom of trade and the free international flow of private investment upon which real recovery, economic growth and productivity depend.

Finally, even when an American official understands and favors Capitalism, he is embarrassed by the fact that several of our most important European allies are addicted to Socialism. Therefore he does not dare to praise Capitalism in specific terms for fear of offending our Socialist allies by implication. The real case against Communism hardly even gets itself officially stated.

It is in large part because of the connotations built into the smear word "Capitalism" that, while millions are willing to die for Communist delusions, nobody has been willing to die for Capitalism — certainly not under that name. But Capitalism is merely the Marxist epithet for the system of the free market, for competitive private enterprise, for the system under which each is permitted to earn and keep the product of his labor — in brief, for economic freedom.

It is because of its freedoms and securities that Capitalism is incomparably the most productive system in the world. It does not have to "prove" its superiority to Socialism or Communism. It has already proved that a thousand times over, whether the standard of comparison is productivity or personal freedom. Capitalism is not the best system because it is best for the employer or for the rich. It is the best system precisely for the worker and for the poor. Under it the status, wages, and welfare of the worker have improved historically at a rate and to an extent that before the Industrial Revolution would have been considered incredible. They are still improving, at, if anything, an accelerative rate.

The answer to Communism, in brief, is Capitalism. And once we understand this, the problems of "ideological strategy" which we have been confusedly debating begin to melt away. We do not have to discuss whether we have been "merely talking to ourselves" or not. The very question is based on a false analogy — the analogy of the lawsuit, of "our side" versus "their side." This analogy unconsciously swallows the Marxist theory of a real clash of interest between economic "classes" — employers versus workers or rich versus poor. But once we recognize that the system of Capitalism is the only workable one, the only one that promotes the interest of both employers and workers, while it provides the maximum of opportunity for the poor to conquer their poverty, then the real distinction is between those who understand the system and those who do not. A man who is known to understand a problem is never merely talking to himself; all those who sincerely wish to understand it can be counted on to listen.

Another problem which melts away is whether we should confine ourselves to combating Communism, because it is a conspiracy and a military menace, or whether we can disregard Communism, on the ground that it has been sufficiently exposed, and concentrate on combating socialist measures because there is so much more real likelihood of their being adopted at home.

The solution is simple. There is only one right answer to the sum of 2 and 2, and an infinite number of wrong answers. Once we have shown that 2 and 2 make 4, we do not have to provide separate proof that every other answer is wrong. Communism is just one wrong answer to the basic social problem — though the worst and most dangerous. Socialism (which proposes the same basic economic measures as Communism) is merely another wrong answer, in the long run only a little less bad and a little less dangerous. "Planning," price control, inflation, Keynesianism, are still other wrong answers. As in arithmetic, there are an infinite number of such wrong answers. But once we have found the right answer, we can explain what is wrong with the other solutions from that basis.

In the social and economic realm, we must base our criticisms on a positive program. That program is the improvement and purification of Capitalism.