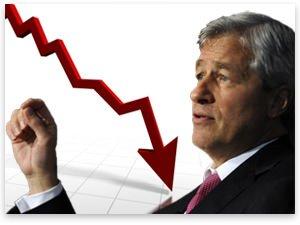 On Friday, May 1, 2012, JPMorgan Chase said it suffered a $2 billion trading loss. Some commentators have suggested that the huge loss emanates from so-called proprietary trading or placing risky bets using the bank's money. The loss raised the credibility of the Volcker rule, which restricts banks from trading their own money. Despite JPMorgan Chase's large loss, the opponents of the Volcker rule are of the view that the rule, if it is introduced, will only destabilize the financial markets and make things much worse. Hence they would like to allow market forces to do their job.

Do Fewer Banking Controls Always Equate with a Free Market?

The proponents for less control in the banking industry hold that fewer restrictions imply a better use of scarce resources, which leads to the generation of more real wealth.

It is true that a free banking environment is an agent of wealth promotion through the efficient use of scarce real resources, while controlled banking stifles the process of real wealth formation. However, it is overlooked by the opponents of the Volcker rule that the present banking system has nothing to do with free banking and thus a free market.

What we have at present is a banking system within the framework of the central bank, which promotes monetary inflation and the destruction of the process of real wealth generation through fractional-reserve banking. In the present system, the more unrestricted the banks are, the more money "out of thin air" can be generated and hence greater damage inflicted on the wealth-generation process. This must be contrasted with genuine free banking, i.e., the absence of a central bank, where the potential for the creation of money out of thin air is minimal.

Elsewhere we have shown that in a free-banking environment with many competitive banks, if a particular bank tries to expand credit by practicing fractional-reserve banking, it runs the risk of being "caught." So it is quite likely that in a free-market economy the threat of bankruptcy would bring to a minimum the practice of fractional-reserve banking.

The Existence of a Central Bank Encourages Fractional-Reserve Banking

The modern banking system can be seen as one huge monopoly bank that is guided and coordinated by the central bank. Banks in this framework can be regarded as "branches" of the central bank.

For all intents and purposes the banking system can be seen as being comprised of one bank. (Note that a monopoly bank can practice fractional-reserve banking without running the risk of being "caught.")

Through ongoing monetary management — i.e., monetary pumping — the central bank makes sure that all the banks engage jointly in the expansion of credit out of thin air. The joint expansion in turn guarantees that checks presented for redemption by banks to each other are netted out. By means of monetary injections the central bank makes sure that the banking system is "liquid enough" so banks will not bankrupt each other.

The Myth of Financial Deregulation

Prior to the 1980s financial deregulation we had controlled banking. Banks' conduct was guided by the central bank. Within this type of environment bank's profit margins were nearly predetermined (the Fed imposed interest-rate ceilings and controlled short-term interest rates); hence the "life" of the banks was quite easy, although boring.

The introduction of financial deregulation and the dismantling of the Glass-Steagall Act changed all that. The deregulated environment resulted in fierce competition between banks. The previously fixed margins were severely curtailed. This in turn called for an increase in volumes of lending in order to maintain the level of profits.

In the present central-banking framework this increase culminated in an explosion in the creation of credit out of thin air — a massive explosion in the money supply. (In the deregulated environment, banks' ability to amplify the Fed's pumping has enormously increased.)

Rather than promoting an efficient allocation of real savings, the current so-called deregulated monetary system has been promoting the channeling of money out of thin air across the economy. From this it follows that, in the framework of the present monetary system, in order to reduce a further weakening of the real wealth-generation processes, it is necessary to introduce tighter controls on banks. Murray Rothbard wrote,

Many free-market advocates wonder: why is it that I am a champion of free markets, privatization, and deregulation everywhere else, but not in the banking system? The answer should now be clear: Banking is not a legitimate industry, providing legitimate service, so long as it continues to be a system of fractional-reserve banking: that is, the fraudulent making of contracts that it is impossible to honor. (Making Economic Sense, p. 279)

Bear in mind that we don't suggest here suppressing the free market but suppressing banks' ability to generate credit out of thin air. Please note that the present banking system has nothing to do with a true free-market economy.

It must be reiterated here however that more controls within the framework of central banking can only slow down the pace of the erosion of real wealth formation. It cannot prevent the erosion. (Remember that the Fed continues to pump money to navigate the economy.) More controls will suppress banks' ability to significantly amplify the Fed's pumping, so in this sense it is preferable to a so-called deregulated banking sector.

According to some commentators, the huge $2 billion loss by JPMorgan Chase, caused by the risky bets placed using the bank's money, raises the need to implement the Volcker rule — more controls on banks' activities. Critics of the Volcker rule are of the view that it will only make things much worse by stifling the efficient allocation of scarce real resources. Our analysis holds that as long as we have a central bank, in order to minimize the damage its policies inflict, it makes sense to impose tighter controls on banks. It is the central bank that enables banks to practice fractional-reserve banking, thereby polluting the economy with money out of thin air. A better alternative is of course to have genuine free banking without the central bank.