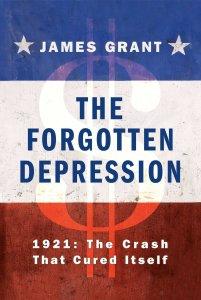 To better understand the current economic environment, financial analyst, historian, journalist, and value investor James Grant, who is informed by both Austrian economics and the value investing theory of the late Benjamin Graham, analyzes the Depression of 1920–1921 in his latest work, The Forgotten Depression: 1921 — The Crash That Cured Itself.

Was It a Depression?

Grant concludes it was a depression, but mainstream economist Christine Romer, for example, concludes it was not a depression. As Grant observes, Ms. “Romer, a former chairman of the Council of Economic Advisors, presented her research, titled ‘World War I and the Postwar Depression,’ in a 1988 essay in the Journal of Monetary Economics. The case she made for discarding one set of GNP estimates for another is highly technical. But the lay reader may be struck by the fact that neither the GNP data she rejected, nor the ones she preferred, were compiled in the moment. Rather, each set was constructed some 30 to 40 years after the events it was intended to document” (p. 68).

In contrast, Mr. Grant surveys economic activity as it existed prior to and during 1920–21 and as it was evaluated during those times. Therefore, five pages into chapter 5 of his book, which is titled “A Depression in Fact,” we read that:

A 1920 recession turned into a 1921 depression, according to [Wesley Clair] Mitchell, whose judgment, as a historian, business-cycle theorist and contemporary observer, is probably as reliable as anyone’s. This was no mere American dislocation but a global depression ensnaring nearly all the former Allied Powers (the defeated Central Powers suffered a slump of their own in 1919). “Though the boom of 1919, the crisis of 1920 and the depression of 1921 followed the patterns of earlier cycles,” wrote Mitchell, “we have seen how much this cycle was influenced by economic conditions resulting from the war and its sudden ending. ... If American business men were betrayed by postwar demands into unwise courses, so were all business men in all countries similarly situated.”

Interestingly, there are a variety of similarities between “The Forgotten Depression” of 1921 and “The Great Recession” of 2007–2008. For example:

The Crash That Cured Itself

Despite similarities, there are noteworthy differences between these two financial events. Foremost among the differences is the reason why “The Forgotten Depression” has, in fact, been forgotten: the government did nothing to stop it. Not only were interest rates not lowered and public money not spent, but interest rates were actually raised and debt paid down. The context behind these actions is fascinating and superbly told and analyzed by Mr. Grant.

For example, the Fed at the time “shared a generally laissez-faire approach to economic and monetary policy. None expressed a doubt about a dollar defined as a weight of gold. None, with the exception of [John Skelton] Williams, so much as intimated that the Federal Reserve had any business trying to override the structure of the market-determined prices. Inflation had distorted those prices. Now deflation must set them right” (p. 94).

But if government did not drive the economic recovery, how did the economy recover?

In answering this question, Mr. Grant draws on his experience as a financial analyst and value investor to evaluate asset prices during this period of time. His discussion sheds considerable light on the power of the price mechanism to inspire action — interest rates, of course, being a price — even during (especially during!) periods of economic distress, as this quote clearly illustrates:

Stocks were commandingly cheap, the Journal’s capitalist source concluded. “Scores” of companies were valued in the market at less than their working capital — as if the business itself, apart from the net cash, was worthless. The shares of “large numbers” of industrial companies were selling at “one-third of their respective intrinsic values.” (p. 194)

The year 1920 was economically seminal for a variety of reasons. In addition to “The Forgotten Depression,” Ludwig von Mises published Economic Calculation in the Socialist Commonwealth in 1920. In this paper, perhaps the most important economics paper of the twentieth century, Mises explained that:

Monetary calculation only has meaning within the sphere of economic organization. It is a system whereby the rules of economics may be applied to the disposition of economic goods. Economic goods only have part in this system in proportion to the extent to which they may be exchanged for money.

On the final page of his book, Mr. Grant observed that “the price mechanism worked more freely in 1920–21 than it was allowed to do in 1929–33” (p. 218). As a result, the former depression has largely been “forgotten” while the later one is remembered as “The Great Depression.” This is not to downplay the severity of the 1920–21 depression. Indeed, as Grant himself observes: “The depression of 1920–21 was terrible in its own way. In comparison to what was to follow [e.g., “The Great Depression” and “Great Recession”], it was also, in its own way, a triumph” (p. 218).

Joseph Calandro, Jr., is a Fellow of the Gabelli Center for Global Investment Analysis at Fordham University, the author of Applied Value Investing  (NY: McGraw-Hill, 2009), and Creating Strategic Value (forthcoming from Columbia Business School Press). He can be contacted at jtacalandro@yahoo.com.