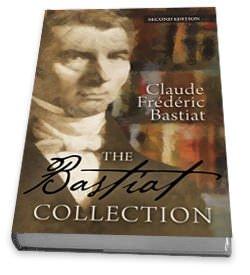 [This introduction to Bastiat's Economic Sophisms (1845) is excerpted from The Bastiat Collection (2011).]

My design in this little volume is to refute some of the arguments that are urged against the freedom of trade.

I do not propose to engage in a contest with the protectionists; but rather to instill a principle into the minds of those who hesitate because they sincerely doubt.

I am not one of those who say that protection is founded on men's interests. I am of the opinion rather that it is founded on errors, or, if you will, upon incomplete truths. Too many people fear liberty to permit us to conclude that their apprehensions are not sincerely felt.

It is perhaps aiming too high, but my wish is, I confess, that this little work should become, as it were, the manual of those whose business it is to pronounce between the two principles. Where men have not been long accustomed and familiarized to the doctrine of liberty, the fallacies of protection, in one shape or another, are constantly coming back upon them. In order to disabuse them of such errors when they recur, a long process of analysis becomes necessary; and everyone has not the time required for such a process — legislators less than others. This is my reason for endeavoring to present the analysis and its results cut and dried.

But it may be asked: Are the benefits of liberty so hidden as to be discovered only by professional economists?

We must confess that our adversaries have a marked advantage over us in the discussion. In very few words they can announce a half-truth; and in order to demonstrate that it is incomplete, we are obliged to have recourse to long and dry dissertations.

This arises from the nature of things. Protection concentrates on one point the good which it produces, while the evils it inflicts are spread over the masses. The one is visible to the naked eye; the other only to the eye of the mind. In the case of liberty, it is just the reverse.

In the treatment of almost all economic questions we find it to be so.

You say: Here is a machine that has turned 30 workmen onto the street.

Or: Here is a spendthrift who encourages every branch of industry.

Or: The conquest of Algeria has doubled the trade of Marseilles.

Or: The budget secures subsistence for 100,000 families.

You are understood at once and by all. Your propositions are in themselves clear, simple, and true. What are your deductions from them?

Machinery is an evil.

Luxury, conquests, and heavy taxation are productive of good.

And your theory receives wide support in that you are in a situation to support it by reference to undoubted facts.

On our side, we must decline to confine our attention to the cause and its direct and immediate effect. We know that this very effect in its turn becomes a cause. To judge correctly of a measure, then, we must trace it through the whole chain of effects to its final result. In other words, we are forced to reason upon it.

But then clamor gets up: You are theorists, metaphysicians, idealists, utopian dreamers, doctrinarians; and all the prejudices of the popular mind are roused against us.

What, under such circumstances, are we to do? We can only invoke the patience and good sense of the reader, and set our deductions, if we can, in a light so clear that truth and error must show themselves plainly, openly, and without disguise; and that the victory, once gained, may remain on the side of intervention or on that of freedom.

And here I must set down an essential observation.

Some extracts from this little volume have already appeared in the Journal des Economistes.

In a criticism, in other respects very favorable, from the pen of Viscount de Romanet, he supposes that I demand the suppression of customs. He is mistaken. I demand the suppression of the protectionist system. We don't refuse taxes to the government, but we desire, if possible, to dissuade the governed from taxing one another. Napoleon said that "the customhouse should not be made an instrument of revenue, but a means of protecting industry." We maintain the contrary, and we contend that the customhouse ought not to become in the hands of the working classes an instrument of reciprocal rapine, but that it may be used as an instrument of revenue as legitimately as any other. So far are we — or, to speak only for myself, so far am I — from demanding the suppression of customs, that I see in that branch of revenue our future anchor of safety. I believe our resources are capable of yielding to the Treasury immense returns; and, to speak plainly, I must add that, seeing how slow is the spread of sound economic doctrines, and so rapid the increase of our budgets, I am disposed to count more upon the necessities of the Treasury than on the force of enlightened opinion for furthering the cause of commercial reform.

You ask me, then: What is your conclusion? And I reply, that here there is no need to arrive at a conclusion. I combat fallacies; that is all.

But you rejoin that it is not enough to pull down — it is also necessary to build up. True; but to destroy an error is to build up the truth that stands opposed to it.

After all, I have no repugnance to declare what my wishes are. I desire to see public opinion led to sanction a law of customs conceived nearly in these terms —

Articles of primary necessity to pay a duty, ad valorem, of 5 percent. Articles of convenience, 10 percent.

These distinctions, I am aware, belong to an order of ideas that are quite foreign to political economy strictly so called, and I am far from thinking them as just and useful as they are commonly supposed to be. But this subject does not fall within the compass of my present design.