The Influence of Dugald Stewart 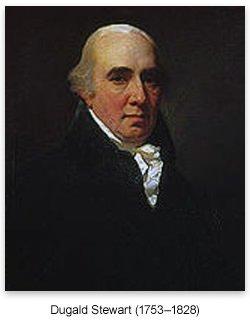 Adam Smith's lectures converted the merchants of Glasgow to a free-trade position, but most of his influence was spread through the Wealth of Nations. A triumphant movement of Smithian disciples really begins only with Dugald Stewart (1753–1828).

Stewart was the son of Matthew Stewart, a professor of mathematics at Edinburgh University. Stewart succeeded his teacher Adam Ferguson as professor of moral philosophy at Edinburgh in 1785. Stewart made himself the leading disciple of Smith and, after the death of his master, Stewart became his first biographer, reading his Account of the Life and Writings of Adam Smith in 1793 to the Royal Society of Edinburgh. But by this time, Britain was in the throes of a hysterical counterrevolution — a veritable White Terror — against the French Revolution and all its ancillary liberal views. Consequently, Stewart was very circumspect in his memoir, and stayed off any controversial topics, such as the necessity for free markets.

Stewart was a highly prolific writer, and an outstanding and notable orator, but he kept his lectures as well as writings bland and acceptable to the powers that be. Thus, in 1794, Stewart recanted his earlier praise of the great French laissez-faire liberal and close friend and biographer of Turgot, Marie Jean Antoine Nicolas de Caritat, the marquis de Condorcet (1743–1794). This Girondist revolutionary was too hot a topic, and Stewart also made sure to praise the British Constitution in his lectures.

By the turn of the century, however, the worst of the counterrevolutionary hysteria had blown over, and Stewart felt safe enough to propound his true classical-liberal views, in books and in lectures. Hence, in 1799 and 1800, Stewart began to lecture on political economy in addition to his general lectures on moral philosophy. He kept giving these lectures until his retirement from Edinburgh in 1810. His 1800 lectures remained unpublished until printed, as Stewart's Lectures on Political Economy, in 1855.

Since the retirement of the great Thomas Reid, founder of the "common sense" school of philosophy, from his post as professor of moral philosophy at Glasgow in the 1780s and his death a decade later, Dugald Stewart had become the only distinguished philosopher in all of Great Britain. Oxford and Cambridge were still in deep decline. With the European war blocking trips to or from the Continent, it became the fashion for bright young students all over Britain to come to Edinburgh and study under Dugald Stewart.

In this way, and clinging passionately to the Smithian line, Dugald Stewart, in the first decade of the 19th century, profoundly influenced and converted a host of future economists, writers, and statesmen. These included James Mill, John Ramsay McCulloch, the earl of Lauderdale, Canon Sydney Smith, Henry Brougham, Francis Horner, Francis Jeffrey, and the Viscount Palmerston. Economics was thereby developed as a discipline, Stewart giving rise to text writers, publicists, editors, reviewers, and journalists.

Typical of this illustrious group was the case of Francis Horner (1778–1817), who was born in Edinburgh, the son of a merchant, and studied under Stewart at the university. Returning from England, Horner enrolled in Stewart's new "special course" in political economy in 1799, where he studied the Wealth of Nations and eagerly read Condorcet and Turgot. Horner indeed was so impressed by Turgot that he wanted to translate Turgot's writings into English. Becoming a lawyer shortly thereafter, Horner went to London and became an MP in 1806.

Inspired by Stewart's teachings, his students, Sydney Smith, Henry Brougham, Francis Jeffrey, and Francis Horner founded the Edinburgh Review in 1802, as a new, scholarly Whig periodical devoted to educating the intelligent public in liberty and laissez-faire. This Whig magazine was the only economic journal in Great Britain and as such enjoyed great influence.1

The last decade of teaching by Dugald Stewart proved, however, to be the last great burst of the Scottish intellectual ascendancy in Great Britain. For the shades of night were rapidly closing in on the Scottish Enlightenment. In the first place, Tory repression of liberal and Whig ideas during the generation of war with France continued to be far greater in Scotland than in England. More important in the long run was the great revival of militant, evangelical Protestantism that swept western Europe and then the United States in the early years of the 19th century. The liberal, moderate, and even deistic views that had spread throughout the Western world in the last half of the 18th century were swept aside by resurgent Christianity.

In Scotland, the result was an intellectual counterrevolution against moderate control of the Presbyterian church, and a purging of the Scottish faculties of moral philosophy and theology of moderate, skeptical, and secularist teachings. Smith and Hutcheson were now denounced in retrospect as guilty of a "refined paganism," and with a resumption of strict theological control of the moral-philosophy faculty, Scottish universities lost their preeminence in Britain and slid rapidly downhill, intellectually if not theologically. Neither classical-liberal social philosophy nor political economy could survive in that kind of academic climate.

As a result, intellectual leadership shifted from Scotland to England, and out of academia altogether for a considerable period. Since English universities were still not hospitable to the new discipline of political economy, the locus of economic thought now shifted from Scottish academics to English businessmen, publicists, and government officials. The shift was symbolized by the fact that while the Edinburgh Review continued to be published for decades and its nominal home was still Edinburgh, three of its four editors had moved to England within a few months of the start of the publication. One of them, who died at a very young age, was Francis Horner. Moving to London as an attorney, Homer quickly became a Whig MP, and his expertise on monetary matters made him chairman of the famous bullion committee in 1810 that was to strike a crucial blow for hard money. There he worked closely with David Ricardo.

In the first issue of the Edinburgh Review, Horner reviewed the famous monetary work of Henry Thornton, as well as a highly important essay by Lord King in a later issue. Horner was a member of prominent Whig clubs in London, the King of Clubs and Brooks's, in both of whom he had David Ricardo as a fellow member. Horner also shared scientific interests with Ricardo, and both men were members of the board of the Geological Society of London.

Another illustration of the intellectual shift from Scotland to England is what happened to two bright young Scotsmen who studied under Stewart and were later to become major leaders in British economics. James Mill (1773–1836) was the son of a Scottish shoemaker, who studied under Stewart and was then licensed to preach in the Presbyterian ministry. Failing to find a ministerial post in the increasingly militant Calvinist climate in Scotland, Mill was obliged to move to London, where he became editor of the Literary Journal. Eventually, Mill found employment in the London office of the East India Company, which gave him a base to pursue his very active economic and philosophical work in his off-hours.

The younger John Ramsay McCulloch (1789–1864), who studied with Stewart in his last years, wrote economic articles in The Scotsman and the Edinburgh Review, and organized an economics lecture series. But despite his obvious merits, McCulloch was unable to find an academic post in Scotland, and finally moved to London to teach political economy at the newly established University of London. But after four years, he spent the rest of his life working as a financial controller in England, again writing and being active in economics in additional to his regular work.

One beneficial result of the Stewart-led sweep of Smithianism in Great Britain is that it swamped the competing strain to "political economy," the "political arithmeticians." These "political arithmeticians, or statistical collectors," as Stewart contemptuously called them, had formed a competing school in economics since the writings of Sir William Petty (1623–1687) and his followers in the late 17th century. The arithmeticians generally scorned the classical method of arriving at economic laws deduced from broad insights into human action and the economy. Instead, in a Baconian fashion, they tried in vain to arrive at theoretical generalizations from hodgepodge collections of statistical facts.

With little insight into the laws of the free market or the counterproductive nature of government intervention, the political arithmeticians tended to be mercantilists and British chauvinists, proclaiming the economic superiority of their homeland. But this school was demolished by the Smithians, first by Smith himself who declared, in the Wealth of Nations, that "I have no great faith in political arithmetic," and then by Stewart, who engaged in a searching methodological critique of this allegedly "scientific" school of thought. Stewart wrote, "The facts accumulated by the statistical collector are merely particular results, which other men have seldom an opportunity of verifying or of disproving; and which … can never afford any important information." In short, in contrast to the replicable quantitative findings of natural science, statistics of human action are mere listings of particular, nonreplicable events, rather than the embodiment of enduring natural law. Stewart concluded that "instead of appealing to political arithmetic as a check on the conclusions of political economy, it would often be more reasonable to have recourse to political economy as a check on the extravagance of political arithmetic."

After the 1790s, then, Adam Smith held total sway over economic thought in Britain. Amid a flourishing swarm of views, all the major protagonists in England, as we shall see below, from Bentham to Malthus to Ricardo, considered themselves devoted Smithians, often trying to systematize and clarify the admitted confusions and inconsistencies of their master.

This article is excerpted from An Austrian Perspective on the History of Economic Thought, vol. 1, Economic Thought Before Adam Smith, chapter 17, part 2, "The Influence of Dugald Stewart" (1995). An MP3 audio file of this article, read by Jeff Riggenbach, is available for download.