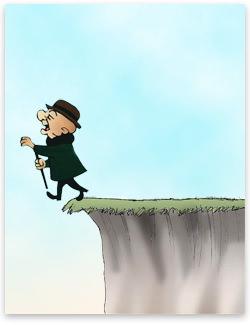 07/27/2009Gary Galles
Recently, my wife started a major "some-assembly-required" project at our home. At a stage when the question was becoming whether to finish or take things apart again and return them, the chance to do something she very much wanted to do came up. So she left the rest to me, but apologized that she didn't mean to dump that extra work on me. That is, the adverse consequences for me were just an unintended byproduct of her choice.

After magnanimously accepting my wife's apology, my next thought was that while her imposition on me was unintended, it was not unpredictable. It was a completely predictable consequence of her choice. That the intent she had in mind did not include imposing costs on me left unchanged the fact that it did so.

That recognition, in turn, got me started asking questions about the law of unintended consequences when it comes to government policy, my favorite version of which is "every government 'solution' has unintended adverse consequences, and that fact always comes as a surprise."

Does the fact that the adverse consequences of a policy are unintended excuse them?

In other words, under what circumstances is "I didn't mean it" a sufficient excuse or apology, with no further actions required?

In personal relationships, intent looms very large because that is the core of such relationships. Did I intend to insult you or embarrass you? Did I sacrifice your interests to mine? These questions can have substantial implications about "us." In that case, saying "I didn't mean it" seems to be necessary to make things right. But even then, it may be far from sufficient. It might still need further "making up for," regardless of intent.

In contrast, politicians campaign on promises to "do the right thing," rather than just to intend the right thing, and the consequences of their incomplete consideration of effects can be costly for millions of the people they claim to represent. As a result, the relevant standards would seem to be substantially higher. Since it is their central job to do things right, "I didn't mean it" is an even less sufficient excuse for unintended adverse effects.

There is also the issue of whether an apology is even offered. While apologizing is a central part of restoring interpersonal relationships, it is far from the typical response of politicians to the unintended effects of their policies. Instead, our "public servants" prefer to point fingers at others for causing the damaging fallout as the best way to keep others from noticing that those problems actually trace back to their own policies (e.g., the financial meltdown). They often go even further, holding hearings to better smear and embarrass others publicly (or to threaten such abuse to silence their critics) rather than admitting any responsibility.

What if the unintended effects are completely predictable?

What if the adverse consequences of a choice are necessarily implied by that choice? This is the usual consequence of scarcity, because it implies that a government — with no resources it does not confiscate from others — can only benefit one party at another's expense. This consequence is heightened by the fact that such redistributions worsen the productive incentives of both the involuntary giver (who has lost some of his rights to his own efforts) and the recipient (whose benefits give him less incentive to benefit himself by benefitting others through voluntary arrangements and reward him for seeking special treatment from government instead). It would seem that, when such adverse consequences for others are necessarily implied, lack of specific intent to cause the harm is irrelevant and meaningless as an excuse.

Alternatively, what if any of several effects, all adverse, might be implied as an unintended effect of that policy, but none are necessarily implied? This is a very common case, because increased government spending must be financed by some combination of taxes, borrowing, inflation, and default. Politicians can deflect criticism that added spending will require taxes, because it need not, and similarly for any other specific adverse effect, because other means with somewhat different adverse effects could be used instead. However, such evasions, hidden in the vagueness that is another hallmark of government policy proposals, do not change the fact that one or more of them — and their predictable adverse consequences — must be imposed on others.

What if the supposed unintended effect is actually an intended consequence (or even the primary one)?

This question of "ascertaining the actual purposes of a given action" is important, according to Robert K. Merton, in his famous "The Unanticipated Consequences of Purposive Social Action," because of the difficulty in "discriminating between rationalization and truth." This problem is important in virtually all "social welfare" programs. For example, Social Security and Medicare are advocated to help the elderly. But one of their supposedly unintended consequences is to make the elderly (and those who are not yet elderly but are forced to pick up much of the tab) more dependent on government. But for politicians seeking power, the increased dependence on government through these and other programs may well be the primary intended consequence, rather than an unintended one. When you consider the reductions in economic growth such programs cause, which harms all future Americans, this interpretation seems far more likely.

One of the greatest problems with government policy is that the intended effects are not actually achieved. For instance, agricultural price supports, intended to benefit farmers, instead benefited current owners of agricultural land whose prices rose to capitalize the expected subsidies, yet consumers were still faced with higher prices for food as a result (and similarly for subsidies for homeownership). When the intended effects are not accomplished, how can the adverse effects that accompany the failed effort be justified?

What if a "public servant" chooses intentional ignorance so as not to see predictable adverse consequences?

When unintended effects arise, it can sometimes be the result of simple misunderstanding. In that case, we tend to be lenient in imputing culpability. However, in many cases, that possibility is inconsistent with anything approaching due diligence. When the relevant analytical tools and empirical consequences have long been known, as is often the case (e.g., the effects of rent control or the minimum wage), only willful ignorance, which Merton termed "a determined refusal … to consider certain elements of the problem," can explain why predictable effects remain unanticipated. But such sought-out ignorance cannot be excused as misunderstanding.

Our "public servants" explicitly seek the delegated task of advancing the general welfare (which cannot justify benefiting one at another's expense). However, those who legislate or regulate from a position of ignorance cannot follow the Hippocratic oath to "first do no harm" — a constraint that is necessary to defend the general welfare. And when those in government move boldly forward anyway, with claims to know real solutions, the harm they cause in their self-delusion is even less defensible.

The law of unintended consequences is ubiquitous. It is the result of a complicated, changing, and interdependent world that exceeds our ability to completely understand it, much less control it. One consequence is that, as any parent knows, it is hard to do good on purpose (because of the potential for negative effects on children's incentives or ethics from our "help"). But parents work hard to actually do the best they can for their children, despite life's inherent limitations. Often, therefore, unintended adverse consequences of their choices are excusable. But the unintended consequences imposed by public policy makers cannot be so easily excused.

Politicians promise to "do the right thing," which necessarily includes a commitment to honest, good-faith efforts to understand what is entailed. Their mistakes can heavily burden millions of people they claim to represent. Yet in most cases, the unintended harms they impose are highly predictable. Where they are not, it is often only the vagueness of their own proposals that prevents that recognition. They often overlook adverse effects by choosing intentional ignorance. Based on that ignorance, they claim to provide solutions anyway, and boldly move forward with policies that demonstrate the difference between their rhetoric and reality. Rather than admitting responsibility and apologizing, they not only misdirect blame to others but also use their control of the political apparatus to smear and publicly humiliate scapegoats. Policies also often fail to achieve their alleged intended effects, but succeed in imposing adverse unintended effects.

To make things even worse, the unintended adverse consequences of government "solutions" undermine the premier example of unintended positive consequences in society — the "invisible hand" of market mechanisms that arise from self-ownership and lack of coercion. The fact that people's dealings must be voluntary means that, in what Adam Smith called a commercial society, our self-interests are primarily advanced indirectly by using our resources in ways that benefit others (in exchange for compensation). Advancing our interests then advances the public's interest (i.e., "the general welfare"), even if that effect is unintended. Government coercion removes the protection that voluntary arrangements provide, destroying their unintended positive consequences at the same time that it imposes unintended negative consequences.