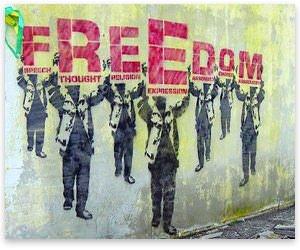 The political upheaval in the Middle East underscores one of the most profound aspects of Ludwig von Mises's worldview: all governments ultimately rely on the consent of the governed.

Although the claim at first sounds preposterous — who could possibly argue that a dictatorship is subject to the will of the people? — there is an important sense in which it is true. Mises's insight has ramifications for choosing methods in the struggle for liberty, and it shows the critical importance of educating the masses in sound doctrines.

In his magnum opus, Human Action, Mises explains the connection between might and ideology:

A durable system of government must rest upon an ideology acknowledged by the majority. The "real" factor, the "real forces" that are the foundation of government and convey to the rulers the power to use violence against renitent minority groups are essentially ideological, moral, and spiritual. Rulers who failed to recognize this first principle of government and, relying upon the alleged irresistibility of their armed troops, disdained the spirit and ideas have finally been overthrown by the assault of their adversaries. The interpretation of might as a "real" factor not dependent upon ideologies, quite common to many political and historical books, is erroneous. …

He who interprets might as physical or "real" power to carry on and considers violent action as the very foundation of government, sees conditions from the narrow point of view of subordinate officers in charge of sections of an army or police force. …

However, things are different for the head of the government. He must aim at preservation of the morale of the armed forces and of the loyalty of the rest of the population. For these moral factors are the only "real" elements upon which continuance of his mastery rests. His power dwindles if the ideology that supports it loses force.

With this foundation, Mises later in the book draws a connection between governments and the approval of the masses:

[Classical] liberalism realizes that the rulers, who are always a minority, cannot lastingly remain in office if not supported by the consent of the majority of those ruled. Whatever the system of government may be, the foundation upon which it is built and rests is always the opinion of those ruled that to obey and to be loyal to this government better serves their own interests than insurrection and the establishment of another regime. The majority has the power to do away with an unpopular government and uses this power whenever it becomes convinced that its own welfare requires it.

Even Dictators Rest on Ideology

Many people scoff when they first hear Mises's claims. Surely there is a sense in which a dictator, who violently suppresses all opposition, rules through force and not consent?

Yet the actual behavior of dictators proves the deep truth in Mises's analysis. For example, the very mark of a closed, totalitarian society is that the media are all controlled by the government. Even graffiti challenging the regime is very quickly removed, far more quickly than authorities would clean up something comparable in a relatively open society. The schools serve as indoctrination camps, teaching the next generation about the virtues of the regime. Finally, the supreme ruler might spend hours every week giving long-winded speeches, not explaining how many guns and secret police agents are at his disposal, but on the contrary explaining how fortunate the people are to be taken care of by such a wise and benevolent leader.

"It is ultimately ideas that determine which way the soldiers point their guns."

These tell-tale signs of a dictatorship all reinforce Mises's observation: the regime can only last if it maintains the illusion that it is beneficial to the masses. Mere physical strength is not sufficient, because it is ultimately ideas that determine which way the soldiers and police point their guns.

We can interpret events in the Middle East through this prism. To understand why Mubarak was toppled relatively easily, in contrast to the bloodshed in Libya, we need to push the analysis deeper and ask why Mubarak lost the support of the army, whereas Gaddafi maintained loyalty on the part of a sizable number of subordinates who were willing to kill and be killed on his behalf.

As Mises explained, such an analysis of "power politics" doesn't primarily concern military statistics on troop strength. Instead, the analysis would focus on the prevailing ideologies animating both the armed forces and the general public who were rising up against the regime.

Looking through a Misesian lens, there are two important lessons we can draw from the turmoil in the Middle East. First, we see that it is possible to topple a hated regime without resorting to a civil war. Although American commentators are bickering over just how peaceful the Egyptian mobs were, it is undeniable that few people, even six months ago, would have predicted that Mubarak's implosion would occur so spontaneously and with such little loss of life.

The second lesson is the importance of having a sound ideology, so that the masses have a shared vision of how a free society works and what is needed to maintain it. Everyone the world over longs for freedom, and no one enjoys living under a brutal dictatorship. But if Egyptians believe that the historical success of the United States came from its periodic elections — as opposed to its relative respect for the institution of private property — then they are in for a rude awakening.

Both lessons underscore the critical importance of educating for liberty. If enough people understand freedom and withdraw their consent, an oppressive regime will topple under its own weight, as Étienne de la Boétie described so eloquently.

Yet to put something durable and superior in the old regime's place, the common man must also know more than mere slogans like "liberty" and "democracy." It's not necessary that the majority become formally trained in political science and economics, but it is necessary that "conventional wisdom" is indeed wise on such matters. Unfortunately, too many "freedom fighters" around the world seem to think the problem with oppressive governments is the specific personalities at the top, as opposed to the institutions themselves.

Educational institutions such as the Mises Institute (including the online Mises Academy) have always been in the business of educating for liberty, and with the Internet their outreach is truly global. If the human striving for freedom is ever to be realized, a necessary first step will be promoting a sound ideology.