How "Sweatshops" Help the Poor 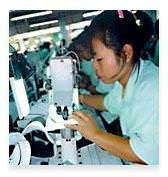 One of the oldest myths about capitalism is the notion that factories that offer the poor higher wages to lure them off the streets (and away from lives of begging, stealing, prostitution, or worse) or away fom back-breaking farm labor somehow impoverishes and exploits them. They are said to work in "sweatshops" for "subsistence wages."

That was the claim made by socialists and unionists in the early days of the industrial revolution, and it is still made today by the same category of malcontents – usually by people who have never themselves performed manual labor and experienced breaking a sweat while working. (I am not referring here to the red herring claim that most foreign "sweatshops" utilize some kind of slave labor. This is an outrageous propaganda ploy designed to portray defenders of free markets as being in favor of slavery).

The self-interest of labor unions in this anti-capitalist crusade has always been transparent: Unions cannot exist without somehow prohibiting competition from non-union labor, whether that labor is at home or abroad. Thus, they wage campaigns of propaganda, intimidation, or violence against non-union workers, whether they are in Indiana or Indonesia. They are not in the least concerned about the well-being of the Third World poor.

If the labor unions have their way, the poor whose lives are improved by their employment by multinational corporations would all be thrown out of work, many of whom would be forced to resort to crime, prostitution, or starvation. That is the "moral high ground" that has been staked out on college campuses all over America where unions have been successful in instigating "anti-sweatshop" campaigns, seminars, and protests.

That the anti-factory movement has always been motivated by either the socialists’ desire to destroy industrial civilization, or by the inherently non-competitive nature of organized labor, is further evidenced by the fact that there was never an "anti-sweat-farm movement." Farm labor is still as rigorous as any physical labor, as it was 150 years ago. Indeed, in the early days of the industrial revolution – and in Third World countries today – one reason why families had so many more children than they do in wealthier countries today is that they were viewed as potential farm hands.

Abraham Lincoln had less than one year of formal education because his parents, like most others on the early nineteenth-century American frontier, needed him as a farm hand. But since agriculture was not considered to be a form of capitalism, and did not pose any real threat to unionized labor, there was never any significant social protest over it.

In a forthcoming article in the Journal of Labor Research Ben Powell and David Skarbek present the results of a survey of "sweatshops" in eleven Third World countries. In nine of the eleven countries, "sweatshop" wages in foreign factories located there were higher than the average. In Honduras, where almost half the working population lives on $2/day, "sweatshops" pay $13.10/day. "Sweatshop" wages are more than double the national average in Cambodia, Haiti, Nicaragua, and Honduras. The implication of this for all those naïve college students (and faculty) who have been duped into becoming anti-sweatshop protesters is that they should support and encourage more direct foreign investment in the Third World if they are at all concerned about the economic wellbeing of the people there.

It is never the workers in countries like Honduras who protest the existence of a new factory there built by a Nike or a General Motors. The people there benefit as consumers as well as workers, since there are more (and cheaper) consumer goods manufactured and sold in their country (as well as in other parts of the world). Capital investment of this sort is infinitely superior to the alternative – foreign aid – which always empowers the governmental recipients of the "aid," making things even worse for the private economies of "aid" recipients. Market-based capital investment is always far superior to politicized capital allocation. Moreover, if the foreign investment fails, the economic burden falls on the investors and stockholders, not the poor Third World country.

During the socialist calculation debate of the early twentieth century, one of the responses that Ludwig von Mises made to the "market socialists" was that it could never be sufficient to simply read the Wall Street Journal and use the prices for inputs and other goods as revealed in the capitalist countries in order to make socialism work, as they contended. As important as private property and market-driven prices are to capitalism, another necessary ingredient for capitalist success is a culture of entrepreneurship, management, risk taking, marketing, financial know-how, and other skills that have developed over several hundred years in the capitalist countries. Without this, the market socialists could only play at pretend-capitalism.

Another virtue of foreign investment in the Third World is that it has the potential of transferring such knowledge to countries where it previously did not exist – or at least was not very prevalent. It is not only technology that the poor countries need, but the culture of capitalism. Without it they will never dig their way out of poverty.

The existence of foreign factories in poor countries also creates what economists call "agglomeration economies." The location of a factory will cause many businesses of all types to sprout all around the factory to serve the factory itself as well as all of the employees. Thus, it is not just the factory jobs that are created. Furthermore, a successful investment in a poor country will send a signal to other potential investors that there is a stable environment for investment there, which can lead to even more investment, job creation and prosperity.

Capital investment in poor countries will cause wages to rise over time by increasing the marginal productivity of labor. This is what has occurred since the dawn of the industrial revolution and it is occurring today all around the world. Discouraging such investment, which is the objective of the anti-sweatshop movement, will do the opposite and cause wages to stagnate.

Finally, perhaps one of the strongest virtues of foreign "sweatshops" is that they weaken the hand of American labor unions. With few exceptions, American unions have long been at the forefront of anti-capitalist ideology and have supported virtually all the destructive tax and regulatory policies that have been so poisonous to American capitalism. Unions believe that they cannot exist unless workers can be convinced that employers are the enemies of the working class, if not society, and that they (the workers) need unions to protect them from these exploiters.

If you want to support the Third World poor, purchase more of the products that they labor to make in the capitalist enterprises that have located there.