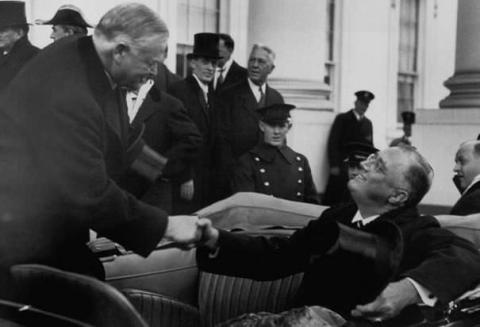 A Good Talk for the Classroom

Murray Rothbard argued that the cause of the Great Depression was the result of Herbert Hoover’s New Deal policies which sought to keep wages and profits high. Robert Higgs, Richard Vedder, and Lowell Gallaway extended this thesis to include FDR’s New Deal policies which created artificially high prices and profits and prevented the normal market correction processes, reduced employment, and consumer demand.

DiLorenzo on the Depression

Thomas J. DiLorenzo in this 2004 Mises Daily, “The New Deal Debunked (again),” provides information behind the Ohanian video referred to above and the work by Cole and Ohanian.

Macroeconomic model builders have finally realized what Henry Hazlitt and John T. Flynn (among others) knew in the 1930s: FDR’s New Deal made the Great Depression longer and deeper. It is a myth that Franklin D. Roosevelt “got us out of the Depression” and “saved capitalism from itself,” as generations of Americans have been taught by the state’s educational establishment.

This realization on the part of macroeconomists comes in the form of an article in the August 2004 Journal of Political Economy entitled “New Deal Policies and the Persistence of the Great Depression: A General Equilibrium Analysis,” by UCLA economists Harold L. Cole and Lee E. Ohanian. This is a big deal, since the JPE is arguably the top academic economics journal in the world.

On top of that, virtually every single one of FDR’s “New Deal” policies made things even worse and prolonged the Depression. Austrian economists have known this for decades, but at least the neoclassical model builders have finally caught on—we can hope.

In this regard the most disappointing thing about the Cole-Ohanian article is that they do not even cite the pioneering work of Richard Vedder and Lowell Gallaway—Out of Work: Unemployment and Government in Twentieth Century America—first published in 1993.

Indeed, it is somewhat scandalous that they do not cite this well-known work while making essentially the same arguments that Vedder and Gallaway do.

This last conclusion—that the abandonment of FDR’s policies “coincided” with the recovery of the 1940s is very well documented by another author who is also ignored by Cole and Ohanian, Robert Higgs. In “Regime Uncertainty: Why the Great Depression Lasted So Long and Why Prosperity Resumed after the War” (Independent Review, Spring 1997), Higgs showed that it was the relative neutering of New Deal policies, along with a reduction (in absolute dollars) of the federal budget from $98.4 billion in 1945 to $33 billion in 1948, that brought forth the economic recovery. Private-sector production increased by almost one-third in 1946 alone, as private capital investment increased for the first time in eighteen years.

Too bad the true lesson has not been learned. DiLorenzo’s lesson:

In short, it was capitalism that finally ended the Great Depression, not FDR’s hair-brained cartel, wage-increasing, unionizing, and welfare state expanding policies.

Free-market capitalism is what is needed to generate real recovery from the current Great Recession. Slow recovery, or a double dip recession, will be the future with the continuation of the Fed-supported Bush-Obama hare-brained Keynesian stimulus spending, accompanied by war and welfare state expanding policies which are again generating significant regime uncertainty.

In 2009, Lee Ohanian published the article, “What—or Who—Started the Great Depression,” in the prestigious Journal of Economic Theory (JET) in which he cited Murray Rothbard. For this article, Ohanian spent four years poring over wage data and culling information from sources related to Hoover and his administration. Based on his research, Ohanian argued that Hoover’s policy of propping up wages and encouraging work sharing “was the single most important event in precipitating the Great Depression” and resulted in “a significant labor market distortion.” In a Mises Daily article in September 2009, I called attention to the importance of Ohanian’s article. Here is part of what I wrote:

Ohanian contends that Hoover’s policy of propping up wages and encouraging work sharing “was the single most important event in precipitating the Great Depression” and resulted in “a significant labor market distortion.”

Thus, “the recession was three times worse—at a minimum—than it otherwise would have been, because of Hoover.”

The main reason is that in September 1931, nominal wage rates were 92 percent of their level of two years earlier. Since a significant price deflation had occurred during these two years, real wages rose by 10 percent during the same period, while gross domestic product (GDP) fell by 27 percent. By contrast, during 1920–1921—a period that was accompanied by a severe deflation—“some manufacturing wages fell by 30 percent. GDP, meanwhile, only dropped by 4 percent.”

As Ohanian notes, “The Depression was the first time in the history of the US that wages did not fall during a period of significant deflation.” Ohanian estimates that the severe labor-market disequilibrium induced by Hoover’s policies accounted for 18 percent of the 27 percent decline in the nation’s GDP by the fourth quarter of 1931.

Regarding the now-conventional explanations of the Great Depression, such as widespread bank failures and the severe contraction of the money supply, Ohanian points out that these two events did not occur to a significant extent until mid-1931, which was two years after the implementation of Hoover’s industrial labor market policies.

The conclusion of Ohanian’s paper is quite—one is tempted to say “hardcore”—Rothbardian.

The Great Depression that quickly superseded and distorted the benign recession-adjustment process was not in any sense caused by monetary deflation but by government-induced nominal wage rigidities, which of course can be temporarily circumvented by surreptitiously reducing real wages via unanticipated monetary expansion. Thus writes Ohanian:

I conclude that the Depression is the consequence of government programs and policies, including those of Hoover, that increased labor’s ability to raise wages above their competitive levels. The Depression would have been much less severe in the absence of Hoover’s program. Similarly, given Hoover’s program, the Depression would have been much less severe if monetary policy had responded to keep the price level from falling, which raised real wages. This analysis also provides a theory for why low nominal spending—what some economists refer to as deficient aggregate demand—generated such a large depression in the 1930s, but not in the early 1920s, which was a period of comparable deflation and monetary contraction, but when firms cut nominal wages considerably.