Henry Hazlitt on the Bailout 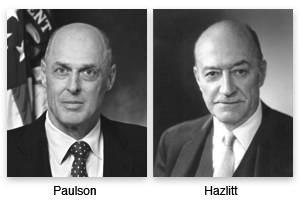 Treasury Secretary Henry Paulson needs to change his reading list. Instead of reading the balance sheets and income statements of the failing banking industry, he needs to read Henry Hazlitt's classic book Economics in One Lesson. It will cost Paulson far less than the $700 billion that he is spending on the bailout, and he might just learn a little economics in the process.

Hazlitt delivers his "one lesson" in chapter 1, and proceeds to spend the rest of the book giving examples. His lesson, based on the work of Frédéric Bastiat, is that "the art of economics consists in looking not merely at the immediate but at the longer effects of any act or policy; it consists in tracing the consequences of that policy not merely for one group but for all groups."

For example, in chapter 2, Hazlitt delivers the well-known "broken window fallacy" in which a hoodlum breaks a shopkeeper's window with a rock. The common folk see it as a tragedy, but an astute Washington bureaucrat could argue that it creates new jobs for glaziers. As Hazlitt points out, though, any resources that the shopkeeper spends on the new window would have been used elsewhere, perhaps for a new suit. So while the glazier gets new business, the tailor loses the same amount of business. There is no net benefit; in fact there is a net loss. Absent the hoodlum, the shopkeeper would have had both a window and a new suit; given the hoodlum, the shopkeeper has a window but no suit. Even though the damage was to the window, it is the suit that is lost to the shopkeeper and, hence, to society.

In chapter 6, entitled "Credit Diverts Production," Hazlitt discusses government lending policies, such as additional credit to farmers or business owners. However, he points out, the recipients of such programs are rarely the more-productive farmers and business owners. After all, the more-productive people are able to borrow their money from private lenders. It is only the less-productive individuals and firms, unable to get funds on the free market, that must turn to government.

For example, suppose that there is a farm for sale. A private lender would normally be willing to lend money to farmer A who has proven his abilities in the past, rather than to farmer B, who has demonstrated a lower level of productivity than has A. However, because government taxes citizens or borrows money itself in capital markets, private lenders have fewer funds available to lend to A. Instead, government lends the money to B on the grounds that B is underprivileged, in need of a hand, or some other politically based argument. The more productive borrower, A, loses out on the scarce land while the less productive borrower, B, gains the resources. Because the less-productive individual acquires the scarce resource, there will be less total production, and the entire society is worse off.

Further, Hazlitt states, the government takes bigger risks with taxpayers' money than private lenders take with their own money. Private lenders who make bad loans will go bankrupt and be forced out of business. But when the government gets involved, it lends funds for riskier ventures since the bureaucrats who approve the loan face no personal recriminations — much less loss of profit — for error.

So it is with the current rash of bailouts. Whatever the final price tag — $500 billion, $750 billion, $1 trillion, more — the fact is that government gets its money either from taxes, borrowing, or the printing press. It is hard to raise taxes by $1 trillion on short notice, and since there is a small hurdle that slows the government's ability to print the money,1 we know that government will issue bonds. In other words, government will borrow the money from private capital markets.

As Hazlitt points out, though, the private capital markets (those that aren't bankrupt and standing in line for a bailout) would otherwise lend their funds to more-productive ventures. If private capital wants to lend directly to the failing banks, it is already capable of doing so. The fact that such private capital is not lending to the banks is a clear indication that the government's current bailout is contrary to free-market principles.

The argument that the government is somehow pumping new capital into the market is absurd. Government is actually borrowing the money from the capital markets that it is in turn injecting into the capital markets. There is no additional source of funding; there is only a diversion of funds from more-productive outlets to less-productive outlets, with government acting as the middleman.

So when Henry Paulson argues that it is necessary to pump money into credit markets to prevent them from freezing up, he doesn't bother to realize that the money he pumps into the credit markets is coming directly out of the very same credit markets. He is doing little more than rearranging the deck chairs on the Titanic; shuffling the money from one set of financial intermediaries to another does not increase either liquidity or solvency. It merely delays the problem for a few brief moments.

Even the failing banks pay lip service to their fiduciary responsibility, but any privately funded firm that took money from more-productive people to give it to less-productive people would soon go out of business. Only the government can violate Hazlitt's logic and survive, because only government can socialize its losses through the tax system.