Hegel and the Man-God | Mises Institute
Skip to main content

Hegel and the Man-God 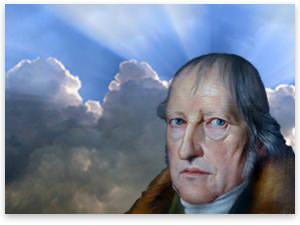 [This article is excerpted from volume 2, chapter 11 of An Austrian Perspective on the History of Economic Thought (1995). An MP3 audio file of this chapter, narrated by Jeff Riggenbach, is available for download.]

The key step in secularizing dialectic theology, and thus in paving the way for Marxism, was taken by the lion of German philosophy, Georg Wilhelm Friedrich Hegel (1770–1831). Born in Stuttgart, Hegel studied theology at the University of Tubingen, and then taught theology and philosophy at the Universities of Jena and Heidelberg before becoming the leading philosopher at the new jewel in the Prussian academic crown, the University of Berlin. Coming to Berlin in 1817, Hegel remained there until his death, ending his days as rector of the university.

In the spirit of the Romantic movement in Germany, Hegel pursued the goal of unifying man and God by virtually identifying God as man, and thereby submerging the former into the latter. Goethe had recently popularized the Faust theme, centering on Faust's intense desire for divine, or absolute knowledge, as well as divine power. In orthodox Christianity, of course, the overweening pride of man in trying to achieve god-like knowledge and power is precisely the root cause of sin and man's fall. But, on the contrary, Hegel, a most heretical Lutheran indeed, had the temerity to generalize the Faustian urge into a world-philosophy, and into an alleged insight into the inevitable workings of the historical process.

In Professor Tucker's words, Hegelianism was a "philosophic religion of self in the form of a theory of history. The religion is founded on an identification of the self with God" 1 It should not be necessary to add at this point that "the self here is not the individual, but the collective organic species 'self.'" In a youthful essay on "The Positivity of the Christian Religion," written at the age of 25, Hegel revealingly objects to Christianity for "separating" man and God except "in one isolated individual" (Jesus), and placing God in another and higher world, to which man's activity could contribute nothing. Four years later, in 1799, Hegel resolved this problem by offering his own religion, in his "The Spirit of Christianity." In contrast to orthodox Christianity, in which God became man in Jesus, for Hegel Jesus's achievement was, as a man, to become God! Tucker sums this up neatly. To Hegel, Jesus

is not God become man, but man become God. This is the key idea on which the entire edifice of Hegelianism was to be constructed: there is no absolute difference between the human nature and the divine. They are not two separate things with an impassable gulf between them. The absolute self in man, the homo noumenon, is not mere godlike … it is God. Consequently, in so far as man strives to become "like God," he is simply striving to be his own real self. And in deifying himself, he is simply recognizing his own true nature.2

If man is really God, what then is history? Why does man, or rather, do men, change and develop? Because the man-God is not perfect, or at least he does not begin in a perfect state. Man-God begins his life in history totally unconscious of his divine status. History, then, for Hegel, is a process by which the man-God increases his knowledge, until he finally reaches the state of absolute knowledge, that is, the full knowledge and realization that he is God. In that case, man-God finally realizes his potential of an infinite being without bounds, possessed of absolute knowledge.

Why then did man-God, also termed by Hegel the "world-self" (Weltgeisf) or "world-spirit," create the universe? Not, as in the Christian account, from overflowing love and benevolence, but out of a felt need to become conscious of itself as a world-self. This process of growing consciousness is achieved through creative activity by which the world-self externalized itself. This externalization occurs first by creating nature or the original world, but second — and here of course is a significant addition to other theologies — there is a continuing self-externalization through human history. The most important is this second process, for by this means man, the collective organism, expands his building of civilization, his creative externalizing, and hence his increasing knowledge of his own divinity, and therefore of the world as his own self-actualization. This latter process: of knowing ever more fully that the world is really man's self, is the process which Hegel terms the gradual putting to an end of man's "self-alienation," which of course for him was also the alienation of man from God. To Hegel, in short, man perceives the world as hostile because it is not himself, because it is alien. All these conflicts are resolved when he realizes at long last that the world really is himself. This process of realization is Hegel's Aufhebung, by which the world becomes de-alienated and assimilated to man's self.

But why, one might ask, is Hegel's man so odd, so neurotic, that he regards every thing that is not himself as alien and hostile? The answer is crucial to the Hegelian mystique. It is because Hegel, or Hegel's man, cannot stand the idea of himself not being God, and therefore not being of infinite space and without limits. Seeing any other being, or any other object, exist, would mean that he himself is not infinite or divine. In short, Hegel's philosophy is severe and cosmic solipsistic megalomania on a grand and massive scale. Professor Tucker develops the case with characteristic acuity:

For Hegel alienation is finitude, and finitude in turn is bondage. The experience of self-estrangement in the presence of an apparent objective world is an experience of enslavement … Spirit [or the world-self], when confronted with an object or "other," is ipso facto aware of itself as merely finite being, as embracing only so much and no more of reality, as extending only so far and no farther. The object is, therefore, a "limit." (Grenze.) And a limit, since it contradicts spirit's notion of itself as absolute being, i.e., being-without-limit, is necessarily apprehended as a "barrier" or "fetter" (Schranke). It is a barrier to spirit's awareness of itself as that which it conceives itself truly to be — the whole of reality. In its confrontation with an apparent object, spirit feels imprisoned in limitation. It experiences what Hegel calls the "sorrow of finitude."

This article is excerpted from volume 2, chapter 11 of An Austrian Perspective on the History of Economic Thought (1995). An MP3 audio file of this chapter, narrated by Jeff Riggenbach, is available for download.