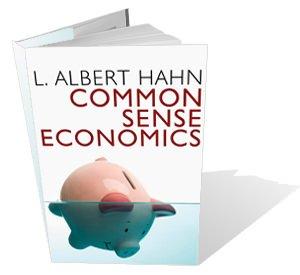 Henry Hazlitt's Economics in One Lesson has long been considered by Austrians as the perfect introduction to economics. Hazlitt put a great deal of effort into dispelling the mercantilist and Keynesian myths that pervade contemporary economic thought. However, despite Hazlitt's valuable insights in Economics in One Lesson, his book does not really touch upon Austrian theory.

Students of Austrian economics oftentimes find it necessary to jump from Economics in One Lesson to a much more difficult textbook, such as Mises's Human Action or Rothbard's Man, Economy, and State, without any type of intermediate preparation. Although kudos must be given to any beginning student capable of finishing either treatise, the fact remains that, given the lack of an introduction to the topics put forth in these magna opera, the student, more often than not, walks away with an incomplete understanding.

The Ludwig von Mises Institute has finally filled the gap! It has done so by reintroducing into print Lucien Albert Hahn's long-lost classic, Common Sense Economics. This book represents the climax of Hahn's intellectual journey. It is not just an introduction to sound economics, but also an excellent refutation of Keynesian theory. Through Common Sense Economics, L. Albert Hahn provides the reader with the intermediary step between the basics (Economics in One Lesson) and more advanced material (Human Action).

Lucien Albert Hahn, born in Frankfurt am Main in 1889, was not always sympathetic to liberalism. Honor Croome wrote, "While most economists of his generation were painfully or joyfully making the pilgrimage from a classical to a Keynesian position, he made it in reverse."[1] What makes Hahn's intellectual journey so stunning is that he anticipated and agreed with many of the concepts John Maynard Keynes would later be famous for, only to later recant and simultaneously anticipate a number of the arguments that would be put forth during the neoclassical counterrevolution of the 1970s and 1980s.[2]

L. Albert Hahn was influenced early on by L. Lincoln Hausmann's The Gold Craze, which anticipated Keynesian inflationary theory; in 1920, Hahn published Volkswirtschaftliche Theorie des Bankkredits (Economic Theory of Bank Credit).[3] Although this book never became as popular as John Keynes's General Theory, probably due in large part to the difference in timing — Keynes's magnum opus was published in the midst of the Great Depression — L. Albert Hahn nevertheless developed many of the theories Keynes would later claim as his own. Hahn himself compared Economic Theory of Bank Credit with The General Theory while writing The Economics of Illusion. Ironically, as detailed below, The Economics of Illusion was his dedicated critique of Keynesian theory.[4]

Like Keynes, Hahn's original economic views rested on his rejection of Jean Baptiste Say's law, on the basis that capital accumulation could interrupt the payment of wages. As a result, Hahn put too much emphasis on the importance of consumption. His rejection of capital theory led him to adopt the position that the interest rate reflected only liquidity preference, and so a bank's interest rate acted independently of the volume of savings.

This same lack of a capital theory led Hahn to support monetary inflation as a means of pushing an economy's resources toward full employment. Although Hahn and Keynes differed on specific points, Hahn adopted credit as a panacea[5] 16 years before Keynes published The General Theory.[6] In fact, there is sufficient evidence to suggest that Keynes was influenced by Hahn's early work.[7]

Hahn did not flirt with what he came to call "pre-classical mercantilist" ideals for long. Persuaded by his critics,[8] and witnessing hyperinflation in Germany,[9] by the late 1930s he completely abandoned the theories put forth in Economic Theory of Bank Credit. Hahn publicly abandoned his original thesis by renouncing it in the third edition (1930) of Economic Theory of Bank Credit,[10] and he published a full refutation of Keynes's General Theory in 1949.

This anti-Keynesian treatise, The Economics of Illusion, was written as a series of articles throughout the 1940s. It was probably during this time that Hahn was directly introduced to Austrian capital theory.[11] Hahn was a vocal critic of the Bretton Woods agreement of 1944, and so was the Austrian economist and American columnist Henry Hazlitt.[12] The two cooperated to the point that Hazlitt wrote the introduction to The Economics of Illusion.

While The Economics of Illusion proved a powerful attack on Keynesian economic theory, Hahn had yet to publish a complete and proper treatise on economics. While Economic Theory of Bank Credit was meant to be such a treatise, his ideological shift led him to write Common Sense Economics. In many ways, Common Sense Economics was the revised and most accurate version of Economic Theory of Bank Credit. It was meant as a treatise to expound Hahn's views on the market system.[13] The result was a brilliant book that provides a clear and concise introduction to sound economic theory.

Common Sense Economics begins by explaining the mechanisms of the market within a "stationary economy" — an economy free of the dynamic changes caused by entrepreneurship and shifting preferences.[14] He introduces the reader to the concept of production, exchange, consumption, and wages. Soon enough he begins to explain the role of money in exchange, and finally the concept of time preference and roundabout methods of production.

In the second chapter, Hahn applies the same concepts to a changing economy. It is here that Hahn's Austrian influence, and his full ideological reversal, is best seen. Apart from explaining the economics of labor and employment, he elucidates the role of savings, consumption and investment, and finally sets to rest the belief that a rise in investment could negatively impact "aggregate demand." Hahn also touches upon the negative effects of government distortion of capital markets through taxation.

The book follows with a chapter on inflation and deflation. Correctly arguing against inflation, Hahn attacks central banking for advocating loose credit policies. He also deeply distrusted deflation, thanks in large part to witnessing the consequences of nonsecular deflation on the German economy during the opening years of the Great Depression.[15] Criticizing the Keynesian equating of secular (noncyclical) deflation with stagnation,[16] Hahn notes that in a changing economy it is impossible for there to be a deficiency in the amount of credit as compared to the demand for credit. While he commented very little on the effects of inflation on the capital structure, he treated that issue and business-cycle theory in the next chapter.

Chapter four, "The Business Cycle" is an exposition of Austrian capital and monetary theory. While Hahn allotts a number of pages to disproving alternative business-cycle theories, including underconsumption, overconsumption, and his own liquidity-preference theory, he also spends a great deal of time explaining the effect of credit and interest rates on the capital structure. While his analysis was imperfect, and perhaps not as meticulous as that of Mises or Hayek, he nevertheless accurately pinpointed monetary inflation as the source of the inflationary booms that lead to depression, and placed the blame on the central banks' easy-money policies.

He also correctly suggested that the moment at which the boom will turn to bust is the moment at which the supply of money stops increasing at an accelerating rate, leading to the beginning of a deflationary period, otherwise known as a depression. Much to the benefit of any student looking to move on to advanced Austrian capital theory, Hahn also explained the role of easy credit in elongating the structure of production and inducing entrepreneurs to invest in unprofitable lines of production.

Hahn concluded Common Sense Economics by looking at the role of the stock market in the economy and delving into price-formation theory. He ended the chapter and the book by defending the stock market against the "animal spirits" attacks of John Maynard Keynes and his ilk, disproving the fallacious idea that sudden changes in mass opinion or in investors' psychology could lead to instability in the market. 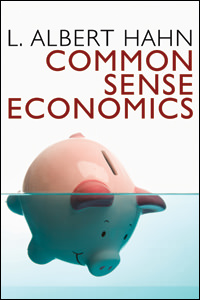 While the content of Common Sense Economics alone makes it one of the best general introductions to economics, its importance and relevance is heightened by its author's clear writing style, which makes reading his work highly enjoyable. Common Sense Economics proves to be the best bridge between the relatively simpler concepts expounded in books like Economics in One Lesson and the much more difficult theories put forth in such works as Prices & Production, Human Action, and Man, Economy, and State.

Even students who already have a strong understanding of more advanced Austrian concepts should consider reading Hahn's Common Sense Economics, for it will strengthen their foundations in economic theory. It goes without saying that for those looking to provide an educational gift to a friend or family member with the intention of introducing them to Austrian theory, Common Sense Economics is undoubtedly the best choice.

[5] Interestingly, the connection between Keynes and Hahn was established by Hayek in his 1931 essay "Reflections on the Pure Theory of Money of Mr. J.M. Keynes":

"Like so many others who hold a purely monetary theory of the trade cycle (as, for example, Mr. R.G. Hawtrey in this country and Dr. L.A. Hahn in Germany), he seems to believe that, if the existing monetary organization did not make it impossible, the boom could be perpetuated by indefinite inflation."

[10] Leeson, Robert, "Influence (Or the Lack of It) In the Economics Profession: The Case of Lucien Albert Hahn." Business Papers and Journal Articles, University of Notre Dame, Australia: 1997, p. 1.

[11] However, Lucien Hahn was probably already well aware of the theories expounded by Ludwig von Mises and Friedrich Hayek.

[16] L. Albert Hahn refers to inflation and deflation as increases and decreases, respectively, in the supply of money. He does not refer to "secular deflation" in the sense of rising productivity and falling prices. George Reisman makes the same point in "The Anatomy of Deflation," Mises Daily, August 18, 2003.