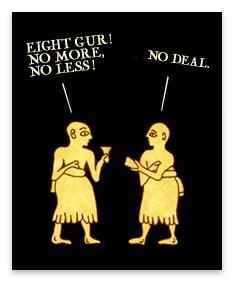 Supply and demand have been allowed to work — at least in a limited way — in energy markets, resulting in ups and downs in gasoline prices. Strong demand coupled with regulatory supply restrictions that were worsened by several hurricanes caused gasoline prices to go up. Then as hurricane-damaged refineries were repaired, gas prices began to plummet.

There have been no significant shortages, thanks to the absence of price controls, but Congress is working diligently to put an end to that outcome. Urged on by an economically ignorant public, Congress recently held one of its periodic Grand Inquisitions of oil company executives to demand an answer to the question: "How dare you profit from the American free enterprise system?"

Accusations of "price gouging" — i.e. allowing market forces to set prices — abound, as do calls for price controls. They aren't always called "price controls," but some slick euphemism such as "anti-price-gouging legislation." It's the same thing.

The case against price controls is not merely an academic exercise, restricted to economics textbooks. There is a four-thousand-year historical record of economic catastrophe after catastrophe caused by price controls. This record is partly documented in an excellent book entitled Forty Centuries of Wage and Price Controls by Robert Schuettinger and Eamon Butler, first published in 1979.

The authors begin by quoting Jean-Philippe Levy, author of The Economic Life of the Ancient World,as noting that in Egypt during the Third Century B.C. "there was a real omnipresence of the state" in regulating grain production and distribution. "[A]ll prices were fixed by fiat at all levels." This "control took on frightening proportions. There was a whole army of inspectors."

Egyptian farmers became so infuriated with the price control inspectors that many of them simply left their farms. By the end of the century the "Egyptian economy collapsed as did her political stability."

Ancient Greece also imposed price controls on grain and established "an army of grain inspectors appointed for the purpose of setting the price of grain at a level the Athenian government thought to be just." Greek price controls inevitably led to grain shortages, but ancient entrepreneurs saved thousands from starvation by evading these unjust laws. Despite the imposition of the death penalty for evading Greek price control laws, the laws "were almost impossible to enforce." The shortages created by the price control laws created black market profit opportunities, to the great benefit of the public.

In 284 A.D. the Roman emperor Diocletian created inflation by placing too much money in circulation, and then "fixed the maximum prices at which beef, grain, eggs, clothing and other articles could be sold, and prescribed the penalty of death for anyone who disposed of his wares at a higher figure." The results, as Schuettinger and Butler explain, quoting an ancient historian, were that "the people brought provisions no more to markets, since they could not get a reasonable price for them and this increased the dearth so much, that at last after many had died by it, the law itself was set aside."

Moving closer to modern times, George Washington's revolutionary army nearly starved to death in the field thanks to price controls on food that were imposed by Pennsylvania and other colonial governments. Pennsylvania specifically imposed price controls on "those commodities needed for use by the army," creating disastrous shortages of everything needed by the army. The Continental Congress wisely adopted an anti-price-control resolution on June 4, 1778 that read: "Whereas it hath been found by experience that limitations upon the prices of commodities are not only ineffectual for the purpose proposed, but likewise productive of very evil consequences--resolved, that it be recommended to the several states to repeal or suspend all laws limiting, regulating or restraining the Price of any Article." And, write Schuettinger and Butler, "By the fall of 1778 the army was fairly well provided for as a direct result of this change in policy."

French politicians repeated the same mistakes after their revolution, putting into place the "Law of the Maximum" in 1793, which first imposed price controls on grain, and then on a long list of other items. Predictably, "in some [French] towns, the people were so badly fed that they were collapsing in the streets from lack of nourishment." A delegation from various provinces wrote to the government in Paris that before the new price control law, "our markets were supplied, but as soon as we fixed the price of wheat and rye we saw no more of those grains. The other kinds not subject to the maximum were the only ones brought in." The French government was forced to abolish its evil price control law after it had literally killed thousands. When Robespierre was being carried through the streets of Paris on the way to his execution the crowds shouted, "There goes the dirty Maximum!" If only this were a lesson learned by contemporary politicians.

At the end of World War II American central planners were even more totalitarian when it came to economic policy than were the former Nazis. During the post-war occupation of Germany, American "planners" rather liked the Nazi economic controls, including price controls, that were in fact preventing economic recovery. The notorious Nazi Hermann Goering even lectured the American war correspondent Henry Taylor about it! As recounted by Schuettinger and Butler, Goering said:

Your America is doing many things in the economic field which we found out caused us so much trouble. You are trying to control peoples' wages and prices — peoples' work. If you do that you must control peoples' lives. And no country can do that part way. I tried and it failed. Nor can any country do it all the way either. I tried that too and it failed. You are no better planners than we. I should think your economists would read what happened here.

Price controls were finally ended in Germany by Economic Minister Ludwig Erhard in 1948, on a Sunday, when the American occupation authorities would be out of their offices and unable to stop him. This spawned the "German economic miracle."

Price controls were the cause of the "energy crisis" of the 1970s and of the California energy crisis of the 1990s (only the wholesale price of electricity was deregulated there; controls were placed on retail prices). For more than four thousand years, dictators, despots, and politicians of all stripes have viewed price controls as the ultimate "something for nothing" promise to the public.

With the wave of a hand, or the flash of a legislative pen, they promise to make everything cheaper. And for more than four thousand years the results have been exactly the same: shortages, sometimes of catastrophic consequence; deterioration of product quality; the proliferation of black markets on which prices are actually higher and bribery is rampant; destruction of a nation's productive capacity in the industries where prices are controlled; gross distortions of markets; the creation of oppressive and tyrannical price control bureaucracies; and a dangerous concentration of political power in the hands of the price controllers.

This is what the economically ignorant among the American public is clamoring for Congress to do with regard to today's energy industry. Let's hope that the recent "hearings" in Congress on the topic of gasoline prices were just another public relations charade.