The Fed's War on the Middle Class 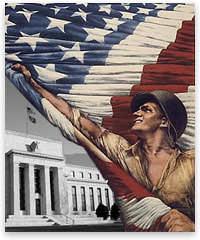 Multimillionaires like Hillary Clinton and Lou Dobbs butter their bread by defending middle-class Americans. They are correct about the problem, but their suggested remedies — protectionism, welfare, regulation, subsidy, and tax reform — would only make the problem worse.

The middle class actually faces many important economic problems, but in reality they boil down to three current problems and one that looms large in our future. All four problems stem from a common cause — the Federal Reserve. History tells us that we either root out this cause or face economic demise.

The first and most obvious problem is price inflation. Gasoline and milk are now almost $4 per gallon. Corn oil is now $15 per gallon and the price of the olive oil I buy was just increased by 25%. I recently snuck up on the manager of the grocery store where I shop (he was marking up the prices of goods already on the shelves). Behind his back I remarked, "Hey, stop causing inflation." He turned around with a worried look on his face and said softly "yes, I know, the prices of everything are going up."

Recently I was shopping in a health food store that sells all sorts of flour, nuts, grains, etc. from bulk containers so that you can purchase the exact amount you want at a good price. The store manager and clerk were debating how they could create a price list that was easy to update. The existing price list had been changed so often that it was almost unusable. The manager told me that everything she orders now comes in with new, higher prices. She said it was scary and mumbled something about building an underground shelter.

The price of gold has been going up, a key signal of monetary inflation and economic troubles. Plus, everything imported from overseas is going up in price, even from China. I know several people who have cancelled plans to visit Europe and foreigners are more and more common at travel destinations in the United States. This is due to the declining value of the dollar, but that is the result of monetary inflation by the Federal Reserve. Yes, the ethanol "program" is stupid, and yes it does increase the relative price of corn, but it does not cause inflation per se.

The second problem is the bust in the housing market. We had a long boom in the housing market and now we face the inevitable consequences. People are going bankrupt, homeowners face foreclosure because they cannot pay their mortgages, construction workers and contractors are finding less work and more unemployment. These problems inevitably bleed into related industries like mortgage lenders, banks, lumber and materials producers, appliance and furniture dealers, decorators and landscape designers, etc. Eventually it bleeds into the general economy because of reductions in income and spending, so that even restaurants, clothing dealers, artists, etc. face cutbacks in sales and possible bankruptcy.

By all accounts, the economy is in a correction and just about everyone in the real world believes we are in a recession. This is likely to intensify because there are still plenty of problem investments in the pipeline. The tax rebate will not stop it from happening and neither will the unprecedented actions of the Federal Reserve to bail out Wall Street. The Fed's view is that they did not cause the bubble or the bust. When the recession is official they will claim that they did everything they could to stop it and to make it less severe. The Federal Reserve plays the blame game and they blame you for this mess. The truth is that they are the ones to blame.

The third problem we face is the matter of income distribution. Over the last quarter century, America has become a richer nation. However, the distribution of income has been in favor of the wealthy and has been working against the middle class. Many Americans earn over $1 million per year and a few now earn over $1 billion dollars per year, including several hedge-fund managers. At the same time we have working-class people whose inflation-adjusted wages have stagnated or have even fallen. This type of result could be a very natural result of economic forces, but it can also be the result of government policies that systematically favor one economic class over another.

Of course the major beneficiary of the Federal Reserve's inflation is government itself, but, in addition, its policies have driven a wedge into the income scale that greatly favors those at the very top to the disadvantage of all of us below. Its policies of inflating the money supply, keeping interest rates low, and bailing out those who lose in subsequent financial crises have been a big boon for all of those in the upper echelons of banking and finance. Not only has the Fed made their primary input (i.e., credit) cheaper, it has greatly reduced their primary business concern (i.e., risk of loss). This explains the extraordinary profits generated in financial markets.

Imagine that you and I have the only two companies that produce and distribute pasta on the national level and that we both enjoy great brand-name loyalty. The government then passes two laws. The first creates a giant subsidy for wheat which is the main ingredient in our products. The second piece of legislation offers billions of dollars of research contracts to publish articles on the health benefits of eating pasta. What would you imagine would happen to our incomes under those circumstances? The Fed does something similar — surreptitiously — for banks and Wall Street.

The Fed has always been a scam to cheat the middle classes, but the lesson of income redistribution is less well known than the connections between the Fed and price inflation and the business cycle (which themselves are not widely understood). Even though mainstream economists will sometimes admit of the negative impact of inflation on real wages, few if any are willing to admit that there are beneficiaries as well as losers. Indeed the Fed's low-interest policy not only encourages spending and borrowing, it discourages the one thing that best helps people raise themselves into higher economic classes — saving. Therefore it should be clear that the Fed is systematically working against the interests of the common American.

With inflation there is also a "winner's curse." Great wealth, especially when it is so quickly and easily achieved, can have very detrimental effects on a person's character and relationships. In the old days it might be said that such a person had "fallen into luxury." In the 18th century, it was also called Epicureanism or what we might today call hedonism. In the wake of the Mississippi and South Sea Bubbles, many 18th-century scholars were quick to link public credit with "luxury."

In 1999, I had a long conversation with the property manager of the three beach houses owned by an important and now thoroughly disgraced CEO. His full time job was to coordinate all the designers, decorators, and contractors who worked on the three hulking beach homes. For example, the beach decking might have to be rebuilt specially for a party. All bathroom fixtures would have to be changed from silver to gold and then back to silver. Bathrooms were regularly changed in ways that required all-new plumbing. Grand parties were planned only to be abandoned at the last moment. Whenever I read or hear the word "debauchery," this conversation comes screaming back into my memory.

The Federal Reserve also plays a central role in the future problem of national bankruptcy. With their ability to create money out of thin air, central banks encourage government to borrow money for current consumption and to make promises that they otherwise could not keep. Monarchies could once borrow huge sums because they controlled tariffs, colonial revenues, and sold charters and monopolies. If worse came to worst, they could and would debase the money. Republican governments could not provide the same guarantee to lenders that ultimate authority and family lineages provided. This was a good thing, and the first republican governments, like Venice and Amsterdam, flourished without debt. This was also true in the United States and, to a lesser degree, England.

Eventually Venice, Amsterdam, and England all adopted central banks. These banks helped pay for unnecessary wars, unprofitable colonies, and to expand the state at home. Eventually all of these central banks resulted in economic crises and devaluation. Meanwhile, the United States remained relatively free of central banking in the 19th century and became the world's economic superpower. We only began to experience the growth of government, continual wars, an expanding colonial empire, and a skyrocketing national debt when the Federal Reserve was founded in 1913. The pace of change accelerated when the final break with the gold standard occurred in 1971.

Our current national debt is quickly approaching $10 trillion and the total amount of our future unfunded liabilities is approaching 60 trillion current dollars. These liabilities are literally overwhelming and continue to grow. We could simple default and ruin the future credit of the government. Alternatively, we could cut the size of government and pay off the debt, but that almost seems laughable in the current political climate. The most likely route is more inflation. The Fed can print more money and drive down the real value of government benefits, pensions, bonds, etc. as well as the value of the dollar. Once again, when push comes to shove in Washington, DC, the way to wager is that Washington will push and shove the burden of its own "luxury" onto the backs of average Americans.

The only way out of this scenario is to reestablish the gold standard. Of the alternatives, this would produce the least economic pain, and most of that pain would be felt by the beneficiaries of the Fed at the top of the wealth scale, rather than those of us below. Furthermore, the gold standard would protect us against returning to the ruinous policies that central banks engender. Essentially, the gold standard creates a level playing field between citizens, financial interests, and the government. In closing, it is worth quoting the great Joseph Schumpeter on the political necessity of the gold standard:

It [the gold standard] is extremely sensitive to government expenditure and even to attitudes or policies that do not involve expenditures directly, for example, to foreign policy, to certain policies of taxation, and, in general to precisely all those policies that violate the principles of economic liberalism. This is the reason why gold is so unpopular now and also why it was so popular in the bourgeois era. It imposes restrictions upon governments or bureaucracies that are much more powerful than is parliamentary criticism. It is both the badge and the guarantee of bourgeois freedom — of freedom not simply of the bourgeois interest, but of freedom in the bourgeois sense. From this standpoint a man may quite rationally fight for it, even if fully convinced of the validity of all that has ever been urged against it on economic grounds. From the standpoint of étatisme and planning, a man may not less rationally condemn it, even if fully convinced of all that has ever been urged for it on economic grounds. (Schumpeter 1954, 405–6)