GET NEWS AND ARTICLES IN YOUR INBOXPrint
A
A
Home | Mises Library | The Fed and the ECB: Two Paths, One Goal

The Fed and the ECB: Two Paths, One Goal 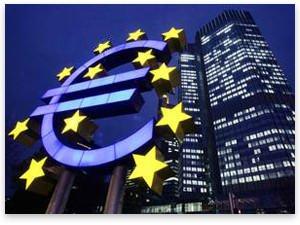 Both the Federal Reserve (Fed) and the European Central Bank (ECB) are owners of the printing press. They produce base money. On top of the base-money production, the fractional-reserve-banking system can produce money out of thin air. Both central banks produce money in order to finance their respective governments. As a result of their money production, prices will be higher than they would have been otherwise. All money users indirectly pay for the government deficits through a reduction in purchasing power and the reduced quality of their money.

While the ECB's and Fed's functions (to provide liquidity to the banking system in times of crisis and to finance the government together with the banking system) are the same, there exist small differences between them. In the so-called open-market operations (another term for active manipulation of the money supply) the central banks produce or destroy base money.

There are two ways central banks produce base money. By tradition, the Fed uses the produce-money-and-purchase approach (PMP). Normally, the Fed produces money in their computers and uses it to buy US Treasuries from the banking system. In exchange for the US Treasuries, the Fed creates money on the account that the selling bank holds at the Fed.

The ECB, in contrast, uses the produce-money-and-lend (PML) approach. It produces money and lends it to the banking system for one week or three months. The preferred collateral for these loans to banks is government bonds.1 As a result of PMP and PML, banks receive new base money. They hold more reserves at their account at the central bank. The additional reserves mean that they can now expand credit and create even more money.

For governments, the mechanism works out pretty well. They usually spend more than they receive in taxes, i.e., they run a deficit. No one likes taxes. Yet, most voters like to receive gifts from their governments. The solution for politicians is simple. They promise gifts to voters and finance them by deficits rather than with taxes. To pay for the deficit, governments issue paper tickets called government bonds such as US Treasuries.

An huge portion of the Treasuries are bought by the banking system, not only because the US government is conceived as a solvent debtor, thanks to its capacity to use violence to appropriate resources, but also because the Fed buys Treasuries in its open-market operations. The Fed, thereby, monetizes the deficit in a way that does not hurt politicians.

But what about the principal on the bonds? What happens when the bond must be paid back? At the end of the term of the bonds, the government would have to pay its holders. The trick here is just to issue a new bond to pay for the maturing one. Thus, the debts must never be paid but keep getting monetized. Figure 1 shows how the Fed finances the US deficit: 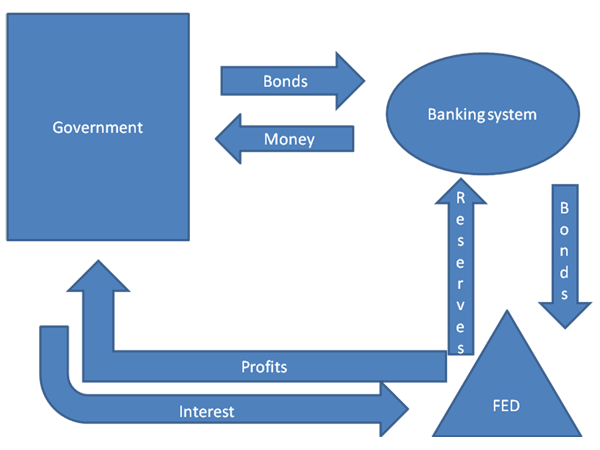 Figure 1: How the Fed finances the US government

Thus, the system is similar to the Fed, with the difference that normally some of the interest payments leak out to the banking system that pays lower interest rates on its loans than it receives on the bonds. Another important difference is that there may be a redistribution between governments if eurozone governments run deficits of different sizes. In my book The Tragedy of the Euro I explain that the Eurosystem resembles a tragedy of the commons. Several independent governments can use one central-banking system to finance their deficits and externalize the costs in the form of a loss of purchasing power of the Euro onto all users of the currency. The incentive is to have higher deficits than other eurozone governments in order to profit from the monetary redistribution. The flow of the new money is shown in figure 2. 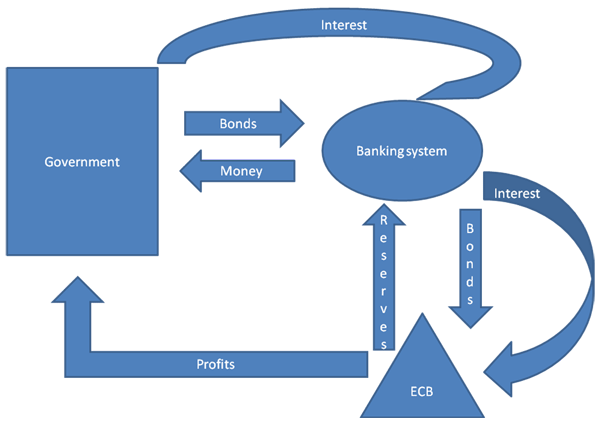 There exists a legal difference. The Fed integrates the government bonds on its balance sheet. The ECB does not do so as bonds remain legally the ownership of the banks. Because the ECB does not publish the collateral provided for its loans, we do not know how many Greek government bonds, for example, are provided as collateral for ECB loans. The Fed is more transparent in this respect.

In both cases, government deficits are effectively monetized. That means that the ECB was bailing out Greece even before May 2010. It did not have to buy the Greek bonds outright; it only had to accept them as collateral. If the ECB had not accepted Greek bonds, Greek debts could not have mounted to such an extent. The Greek government would have had to default much earlier.

Aside from this more direct monetization, there is also a monetization going on that is often neglected. Market participants know that central banks buy government bonds and accept them as the preferred collateral. Banks buy the bonds due to their privileged treatment ensuring a liquid market and pushing down yields.

Knowing that there is a very liquid market in government bonds and a high demand by banks, investment funds, pension funds, insurers, and private investors buy government bonds. Government bonds become very liquid and almost as good as base money. In many cases, they serve to create additional base money. In other cases they stand as a reserve to be converted into base money if necessary. As a consequence, new money created through credit expansion often ends up buying liquid government bonds, indirectly monetizing the debt. (Another main holder of government debts is other foreign central banks.)

Imagine that the government has a deficit and issues government bonds. Part is bought by the banking system and used to get additional reserves from the central bank, which buys the bonds or grants new loans, accepting them as collateral. The banking system uses the new reserves to expand credit and grant loans to, for example, the construction industry. With the new loans, the construction industry buys factors of production and pays its workers. The workers use part of the new money to invest in funds. The investment funds then use the new money to acquire government bonds. Thus, there is an indirect monetization. Part of the money created by the fractional-reserve-banking system ends up buying government bonds because of their preferential treatment by the central bank, i.e., its direct monetization.

The process is shown in figure 3: 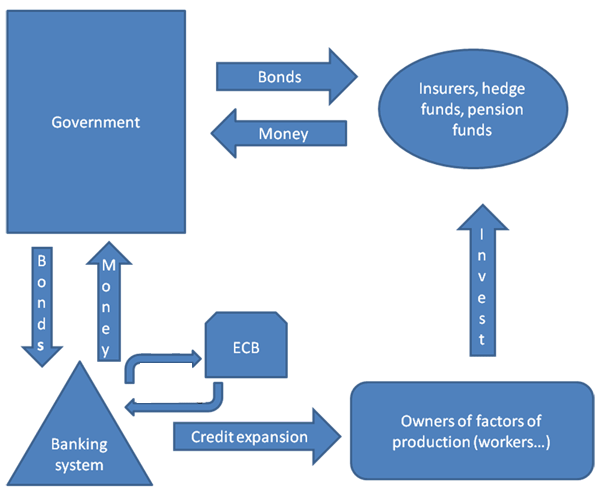 While it is an intricate system at the first sight, one that many common citizens fail to understand, the system boils down to the following: The government spends more than it receives in taxes. The difference is financed by its friends from the financial system, accommodated by central banks. Money production sponsors politicians' dreams, thereby destroying our currencies. The population pays in the form of a lower purchasing power of money.

For governments it is the perfect scheme. The costs of their deficits are externalized to the users of the currency. The debt is never paid through unpopular taxes but simply by issuing paper that says, "government bond."