The Fallacy of We 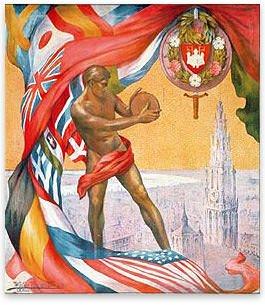 While watching the Olympics, we tend to cheer participants along national lines. We root for our country's athletes over those from the rest of the world. While there is nothing wrong with this fun diversion, the concept of the individual must never be lost amid the ideal of the collective — the belief that the members of the collective (the nation in this instance) are faceless automatons dedicated to serving the whole.

Before I continue, let me introduce a mathematical term that will help expose the fallacy of the collective: the fractal. Briefly, a fractal is a shape that can be split into parts that are each as complex as the original shape itself.

Additionally, consider computer-generated images that have fractal qualities. Here, a complex structure is drawn that appears to have ragged, yet well-defined edges. A closer view of an edge reveals a structure that is as complex as the original image. This continues iteratively as each closer view reveals new and equally complex structures, ad infinitum.

The point is that each closer view reveals new complexity and uniqueness. In essence, the more we know, the less we know.

Now we turn our attention toward the structure of society.

The topology of society has fractal qualities. Starting from a global view, we tend to see countries as homogenous aggregates. We assume that each country has certain attributes that replicate to all inhabitants — there are Chinese and there are Americans.

In this view, citizen A of country X is nothing more than an instantiation of the ideal-type of the aggregate characteristics attributed to X. We immediately claim to know everything about A simply from the fact that A is a citizen of X. They act that way because he is French and she is Russian. This is a dangerous oversimplification of acting men and women, as we shall see.

Next, let us apply the concept of fractals and refocus our attention on country X alone. By looking exclusively at X, we recognize variations among its various regions. Instead of a homogenous group, we find complexity that is similar to the complexity found relative to the countries of the world. Taking the United States as our example, we recognize differences between residents of (say) Ohio and California. All of a sudden, our homogenous ideal-type American is now the aggregate of various and unique groupings.

Dare we create the ideal-type Ohioan? Certainly not, since a closer view of Ohio reveals variations within the state that are as complex as those between the states. As we work our way through iterative views, we arrive at the evil aggregate: the community.

I single out the community, as it is this concept that allows all larger views to have meaning.

The call for the collective begins with the community. From the first days of kindergarten, public schools drum the concept of community into the minds of children. The schools instruct children to view themselves as similar and indistinguishable components of their communities, regardless of whether the community is school or school district or some other aggregation.

To that end, public schools define themselves as "communities of learners" — not as individuals, but as community whose faceless members strive toward the collective good.

Issues that affect a community affect each member (or child) equally. Children are to act in a manner that makes their school proud. They are encouraged to propose community projects and are required to volunteer for community service. The inherent message is that dying — figuratively in this instance — for the collective is the desired fate in life.

Universalism and collectivism cannot accept this democratic solution of the problem of government. In their opinion the individual in complying with the ethical code does not directly further his earthly concerns but, on the contrary, foregoes the attainment of his own ends for the benefit of the designs of the Deity or of the collective whole.

Those who want to start the study of human action from the collective units encounter an insurmountable obstacle in the fact that an individual at the same time can belong and — with the exception of the most primitive tribesmen — really belongs to various collective entities. The problems raised by the multiplicity of coexisting social units and their mutual antagonisms can be solved only by methodological individualism.

Once the idea of community takes root, children have a difficult time seeing themselves as anything other than a collective part. Sadly, this follows the child through to adulthood. Tax issues are proposed for the benefit of the community. And good community members must always support the collective ends.

If society or state is an entity endowed with volition and intention and all the other qualities attributed to it by the collectivist doctrine, then it is simply nonsensical to set the shabby individual's trivial aims against its lofty designs.

However, acting men and women are not drones working for the good of the hive. When humans are controlled by the central authority, they no longer act; they react. And, as Mises proved long ago, humans reacting to the commands of the dictator are not constructing a hive, they are simply consuming the remaining honey — the capital — and awaiting a very cold winter.

Yet even the community itself is the aggregation of various and unique groupings. Closer views reveal the family. And even families are the product of various and unique entities: individual acting men, women, and children. It is this complexity — the essential complexity of the individual — that explains why discussing politics and parenting among family members is so tricky. It also explains why watching the football game is safer than table talk on a long Thanksgiving afternoon. But it is this complexity that allows for the growth of the division of labor, which advances and improves economies.

There are two views of the structure of society. There is the collective view, which falsely creates ideal-type aggregations and assumes all members are instantiations of that ideal-type. And there is the Austrian view, which sees only the individual and does not attempt to create any aggregations.

All varieties of collectivist creeds are united in their implacable hostility to the fundamental political institutions of the liberal system: majority rule, tolerance of dissenting views, freedom of thought, speech, and the press, equality of all men under the law.

The collectivist blurs the face of the individual, making the steps to the evil -isms of our world relatively easy and likely.

The Austrians, on the other hand, see the individual despite the geopolitics of the day, and it is the focus on the individual that leads increasingly toward liberty.

Cheer your home team. And cheer the fractals who are your neighbors, friends, and colleagues. Do not lose them in a collective haze.

All quotes from Mises, Human Action.