Economics in One Lesson Is Still Relevant 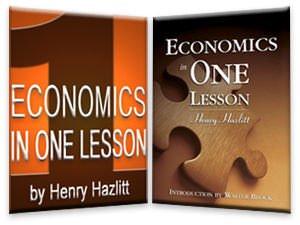 I continue to be struck by the relevance of Henry Hazlitt's Economics in One Lesson even though it was published over sixty years ago. The Mises Institute's new edition, with an introduction by Walter Block, will make Hazlitt's insights accessible to a new generation of students and readers. We have made much progress during the decades since Hazlitt first put pen to paper and applied Frederic Bastiat's insights about "that which is seen, and that which is not seen" to a variety of issues.

Fortunately, the Soviet Union is no longer with us and the Berlin Wall has been a thing of the past for almost twenty years now. However, billions of people the world over still live in abject poverty. And poverty kills: many, especially children, will die of diseases that are easily treated in the developed world. Hazlitt's insights remain as relevant today as they were when the first edition of the book was published.

Hazlitt pulls no punches from the outset, reminding us that "Economics is haunted by more fallacies than any other study known to man." As we have seen, the human costs of these fallacies are massive. "The Lesson" Hazlitt teaches is timeless. If we are going to evaluate policies — whether they be policies enacted by governments, corporations, institutions, or individuals — we have to look at how those policies affect everyone, not just favored constituencies or select groups.

Consider, for example, the oft-repeated claim that natural disasters are good for a local economy. It might very well be that income in an area where there was a hurricane might go up as a result of government transfers, insurance payments, and other redistributions, but these resources have to come from somewhere. He explains this straightforward insight in his first few chapters by considering whether the world is a better place because a hoodlum smashes a window. The glazier earns income, but society loses the services of the window. Moreover, the glazier could have earned income in another line of work, and the resources used to replace the window could be used to create something else. Destruction, whether it occurs because a vandal breaks a window, because a hurricane wrecks a major city, or because a waiter drops a load of dishes, makes us poorer.

Hazlitt applies this very simple (and some would say obvious) insight to less-apparent situations. Consider, for example, the claim that a government can "create jobs" by subsidizing different projects or "protect jobs" by obstructing trade or technological advancement. Hazlitt points out that "public works mean taxes" in chapter 4, and "taxes discourage production" in chapter 5. Government employment programs can only create some jobs by destroying others, and government attempts to protect some jobs can only succeed if the government sacrifices other jobs. In both cases, these interventions make us poorer.

Consider one of economists' favorite examples, the government-financed sports arena. Stadiums and arenas are very large, very visible projects that are usually intended to "revitalize" places, and the picking of the taxpayers' pockets is usually justified on the basis of the alleged increases in employment and incomes that will result from the project. However, a government cannot revitalize one area without devitalizing another, and to add insult to injury, the consensus among economists as I understand it is that government-financed arenas are net drags on a local economy. If a stadium project genuinely created value, it would be profitable. If the project were profitable, it would not need government subsidies.

Hazlitt takes on a similar idea when discussing government interventions designed to protect certain industries. Tariffs on imports might make some people in some industries richer in the short run; however, if we protect workers in industries where Americans do not have a comparative advantage (some kinds of manufacturing, for example), their increases in employment and income only come at the expense of others' employment and income. By saving or protecting some industries, we are destroying or hurting others.

A classic example (originally proposed by David Friedman) suggests that there are two ways the United States can produce cars: we can build them in Detroit, or we can grow them in Iowa. Imagine there were a machine that could convert corn into cars. Then imagine we could get more corn and more cars if we grew only corn and used the machine instead of dividing our efforts among corn and cars. Clearly, having the machine makes us richer. Now imagine that this machine is called "Japan." That's how trade works: it allows us to get more output using fewer inputs.

Some of Hazlitt's most useful discussions concern the role of prices and of the system of profit and loss. Profits and losses tell entrepreneurs whether they have created value or wasted resources, and market prices tell people what others are willing to give up to get an additional unit of a good or service. If the market is left to its own devices, the price will be an accurate reflection of what something is worth at a given point in time. When the government intervenes, it forces the prices to lie: the signals about the costs and benefits of different actions will be distorted. The minimum wage, for example, creates unemployment by making it illegal to hire units of labor that are not productive enough to justify the minimum wage. Similarly, rent control creates shortages by making it less attractive for investors to provide housing.

Economics in One Lesson presents a very simple explanation of important economic principles. Given the popularity of many government interventions, it is a lesson we haven't fully learned yet. With the publication of this new edition of Economics in One Lesson, the timeless truths elucidated by Henry Hazlitt will become that much easier to communicate.