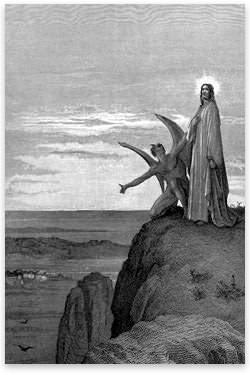 [This article is excerpted from An Austrian Perspective on the History of Economic Thought (1995), volume 2, chapter 9: "Roots of Marxism: Messianic Communism." An MP3 audio file of this article, narrated by Jeff Riggenbach, is available for download.]

"… but the Devil later originated selfishness and the institution of private property."

For centuries the alleged ideal of communism had come to the world as a messianic and millennial creed. Various seers, notably Joachim of Fiore, had prophesied the final state of mankind as one of perfect harmony and equality, one where all things are owned in common, where there is no necessity for work or need for the division of labor. In the case of Joachim, of course, problems of production and property, indeed of scarcity in general, were "solved" by man no longer possessing a physical body. As pure spirits, men as equal and harmonious psychic entities spending all their time chanting praise to God, might make a certain amount of sense. But the communist idea applied to a physical mankind still needing to produce and consume is a very different matter. In any case, the communist ideal continued to be put forward as a religious, millennial doctrine. We have seen in volume I its enormous influence on the Anabaptist wing of the Reformation in the 16th century. Millennial and communist dreams also inspired various fringe Protestant sects during the English Civil War of the mid-17th century, particularly the Diggers, the Ranters, and the Fifth Monarchy Men.

The most important forerunner of Marxian communism among these Civil War Protestant sectarians was Gerrard Winstanley (1609–60), the founder of the Digger movement and a man much admired by Marxist historians. Winstanley's father was a textile merchant, and young Gerrard became an apprentice in the cloth trade, rising up to become a cloth merchant in his own right. Winstanley's business failed, however, and he found himself downwardly mobile, an employed agricultural laborer from 1643 to 1648. As the Protestant Revolution escalated in the late 1640s, Winstanley turned to writing pamphlets espousing mystical messianism. By the end of 1648, Winstanley had expanded his chiliastic doctrine to embrace egalitarian world communism, in which all goods are owned in common. His theological groundwork was the heretical, pantheistic view that God is within every man and woman, and is not a personal deity external to man. This pantheistic God has decreed "cooperation," which for Winstanley meant compulsory communism rather than the market economy, whereas the antithetical creed of the Devil glorified individual selfishness. In Winstanley's schema, God, meaning Reason, created the earth, but the Devil later originated selfishness and the institution of private property. Winstanley added the absurd view that England enjoyed communist property before the Norman Conquest in 1066, and that this conquest created the institution of private property. His call, then, was to return to the supposedly original communist system.2

"As pure spirits, men as equal and harmonious psychic entities spending all their time chanting praise to God, might make a certain amount of sense."

In the final, most fully developed version of his system, The Law of Freedom in a Platform, or True Magistracy Restored (1652), Winstanley envisioned a largely agrarian society, in which all goods would be communally owned, and where all wage labor and all commerce or trade would be outlawed. In fact, all sale or purchase of goods would be punishable by death as treasonous to the communist system. Money would be clearly unnecessary since there would be no trade, and presumably it would be outlawed as well. The government would establish storehouses to collect and distribute all goods, and severe penalties would be levied on "idlers." By this time, Winstanley's pantheism had begun to shade into atheism, for all professional clergy would be outlawed, there would be no Sabbath observation, and "ministers" would be elected by the voters to give what would be essentially secular sermons, teaching everyone the virtues of the communist system. Education would be free and compulsory, and most of the children would be channeled into useful crafts — a foreshadowing of the progressive educational creed. Book-learning, which the uneducated Winstanley felt to be far inferior to practical vocational skill, would be discouraged.

Winstanley's strategic recipe for communist victory was for various groups of his followers, or Diggers, to move peacefully into waste or common lands, and to set up communist societies upon them. The first Digger group, led by Winstanley, moved on to waste lands near south London in April 1649, and ten Digger settlements were thereby established over the next year. Only 30 Diggers moved into the first commune, and only a few hundred set up communes across the country. The notion was that these egalitarian communist settlements would so inspire the masses that they would abandon wage work or private property and move on to Digger settlements, thus bringing about the withering away of the market and of private property. In reality, the masses treated the Digger communes with great hostility, causing their suppression in a short period of time. By the time of his magnum opus in 1652, Winstanley was vainly appealing to the dictator, Oliver Cromwell, to impose his cherished system from above. The idea of mass direct action to establish his system was rapidly abandoned in the face of reality.

Another more mystical communist sect during the English Civil War was the half-crazed Ranters. The Ranters were classic antinomians, that is, they believed that all human beings were automatically saved by the existence of Jesus, and that therefore all men are free to disobey all laws and to flout all moral rules. Indeed, it was supposed to be good and desirable to commit as many sins as possible in order to demonstrate one's automatic freedom from sin, and to purge oneself of false guilt about committing sins. To the pure at heart, the Ranters opined, all things are pure. The Ranters, like Joachim of Fiore and the Anabaptists of the Reformation, proclaimed the coming age of the Holy Spirit, which moved in every man. The key difference from orthodox Calvinism or Puritanism is that in those more orthodox creeds, the workings of the Holy Spirit were closely tied to the Holy Word — that is, the Bible. For the Ranters and other Inner Light Groups, however, all deuces were literally wild. The Ranters pursued this path, too, to pantheism: as one of their leaders declared: "The essence of God was as much in the Ivie leaf as in the most glorious Angel."

This article is excerpted from An Austrian Perspective on the History of Economic Thought (1995), volume 2, chapter 9. "Roots of Marxism: Messianic Communism." An MP3 audio file of this article, narrated by Jeff Riggenbach, is available for download.