GET NEWS AND ARTICLES IN YOUR INBOXPrint
A
A
Home | Mises Library | Can the Underground Economy Save Europe?

Can the Underground Economy Save Europe? 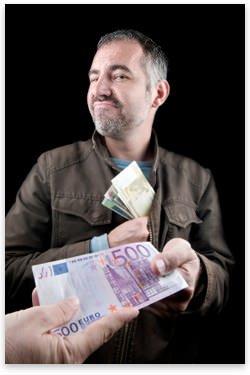 11/21/2011David Howden
"The growth of unofficial employment is an entrepreneurial response to unnecessarily rigid labor markets and excess regulation."

Even with the United States' lengthening of unemployment insurance benefits at the wake of this crisis, the benefits for the standard down-on-his-luck American pale in comparison to those of the average European. Upon job separation the average Frenchman can expect to see more than half of his salary extended in the form of unemployment benefits. Many European workers see these benefits extended for two to three years after their termination, with some countries extending benefits indefinitely.

This problem of unemployed masses was no more than an unfortunate consequence of a well-developed social-welfare system during the boom years. Government coffers were plush to pay out hefty benefits. As the crisis wears on, this unfortunate side effect is increasingly turning into an oncoming train wreck as government deficits widen and welfare payments strain already tenuous state finances.

Decreasing benefits may be unfortunate to those relying on them, but such cuts are inevitable. Already some countries have enacted measures to try to bring these unsustainable systems closer to sustainability. The retirement age has been extended to reduce social-security payments, and unemployment benefits have been cut. People have responded with protests, trying to maintain the standard of living that they fought so hard to achieve over the past decades. Unfortunately, not all things desirable are feasible — Europe's plush welfare system is a case in point.

Fortunately there is a silver lining. In most European countries, and especially in the crisis-stricken periphery, large underground economies exist. While Spain's official unemployment rate is pegged around 20 percent, a substantial portion of its workers are indeed employed, if only outside official statistics. As I outline in a new collection I've edited, Institutions in Crisis: European Perspectives on the Recession, the underground economies of Europe's periphery provide ample (if not always desirable) opportunities for employment. While the Greek economy has the largest underground estimated at 25.2 percent of GDP, the PIGS countries (Portugal, Italy, Greece, and Spain) average 21.7 percent of their economic activity hidden from the official statistics. For comparison, 14.7 percent of German, and 7.8 percent of American output is estimated to be confined to the underground.

If substantial masses of officially unemployed workers can take solace in knowing that there exist large underground venues for their efforts, we may do well to outline the reasons why this unofficial option exists. Hans Sennholz, in his work The Underground Economy, lists four main categories of underground economy activity:

While many people assume that the underground economy consists purely of tax evaders and drug dealers, we see that only two of the categories above allow for these groups. That is not to say that underground workers in the other categories do not evade taxes or sell elicit substances. It is to say that the main reason for their involvement outside of the official economy is neither of those reasons.

Europe's underground economies have seen much growth over the past 30 years, especially since this crisis began. In some ways the growth of unofficial employment is an entrepreneurial response to unnecessarily rigid labor markets and excess regulation. Evidence suggests that industry in at least two of our prime culprits have benefited from the expansion of the underground economy. Growing underground economy employment has allowed Italian and Spanish firms to expand and contract production more easily to market demands.

There is an increased emphasis on reallocating the underground economy into the official one as Europe's crisis progresses. The most commonly advocated method involves more frequent tax audits and heavier fines to incentivize entrepreneurs to report their full incomes to the official authorities. The problem with such a solution is that it ignores the core reason why the underground economy exists — and may very well strengthen its existence.

Entrepreneurs operate in the unofficial economy for two main reasons: taxes make official transactions unprofitable, or regulations make them unfeasible. Threats of increased monetary fines do nothing to alleviate the former reason, while only a reduction in the web of rules and regulations will reduce the latter.

Increased fines and audits will undoubtedly reduce the size of the underground economy. Entrepreneurs, even underground ones, will respond to the increased costs and risks by reducing the scope of their activities. This reduction will not translate into an increase in official market activity. Only by easing the regulatory and tax burden facing entrepreneurs will more of them be willing to operate in the official economy.