GET NEWS AND ARTICLES IN YOUR INBOXPrint
A
A
Home | Mises Library | Can Government Fight Epidemics? 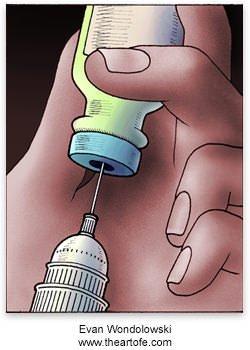 Now that the vast undersupply of H1N1 vaccines has finally impacted the market, the latest debacle of government-supplied health production has been exposed. Millions of shots were produced but not distributed on time, and in some areas the majority of promised shots have not been delivered. The vast magnitude of this undersupply reveals not simple dysfunction in the Department of Health and Human Services (DHHS) but rather the necessary failure of central planning.

The problem began simply enough: the DHHS granted itself a monopoly on the production, pricing, and distribution of H1N1 flu vaccines. The price was decreed to be an affordable $25, ostensibly ensuring universal access to the vaccine. However, because American politicians must maintain a façade of support for a free-market system, the DHHS awarded the flu vaccine contract to a private firm, Novartis.

The health bureaucracy's monumental failure to provide H1N1 shots should be no surprise to students of Austrian production theory. The production and distribution of a flu vaccination requires the harmonious cooperation of many different types of entrepreneurs, scientists, laborers, and logistics managers across space and time. This structure of production must be guided by economic calculation, which, as Mises taught, is impossible under socialism.

It might seem that because the actual producer of the vaccines, Novartis, is a private firm, the socialist calculation problem would not impede vaccine production. However, deeper research reveals that the quantity, price, and timing of the flu vaccines were stipulated in advance by the DHHS.

This point is crucial; a central health bureaucracy is staffed chiefly by expert navigators of red tape, not by the best and most-experienced medical surveyors and epidemic experts. This is largely because such experts, unlike bureaucrats, contribute real value to a firm, so they are hired away by private health providers. Thus, the DHHS faces what Hayek termed a "knowledge problem" and will therefore be completely unable to calculate market-clearing quantities and prices.

In setting a price of $25 and a production capacity of 150 million units, the DHHS forced a severe shortage of vaccines. Such massive shortages do not occur in truly free markets, in which prices fluctuate to coordinate production with demand.

Critics of the Austrian position may point out that Novartis, a private firm, failed to fill its contracted orders of the flu vaccine. Therefore, even the market would not have been prepared to adequately supply vaccinations. This shallow argument is wrong on several levels.

First, the DHHS conferred onto Novartis a legal monopoly on the production and distribution of the flu vaccine. In an open market for vaccines, other medical and chemical firms would have forecasted the coming shortage and retooled their capital goods toward the production of the H1N1 vaccine.

Indeed, the shortage was no secret and had been reported for months, but monopoly rights kept others from entering the market. Underproduction by Novartis, if prices were allowed to serve their function, would have been a godsend to flexible companies like Pfeizr or Johnson & Johnson. They would have pumped out vaccines until the market-clearing price was reached.

But this is not all. The DHHS, through the rigidity of its contract, set Novartis up to fail from the very beginning. By awarding the total revenue of the project in advance, the DHHS set a rigid cost ceiling for Novartis. It is plausible that Novartis soon figured out that producing 150 million flu shots annually for eight years would take more resources than they could afford to purchase with their maximum possible revenue of $486 million.

In a free market, the entrepreneurs in charge of Novartis could have projected whether or not they could recoup extra costs by charging higher prices. With a government contract, Novartis's hands were tied — they could only do their best not to lose money.

The legal monopoly and the revenue ceiling also functioned as impediments to excellence in the provision of healthcare. Because Novartis only faces a possible total reward of $486 million, and because they face literally no competition, they have no incentive to exceed their obligations to the government.

In fact, they even have an incentive to underperform. It is much more costly for a federal department to switch its monopolistic vaccine provider than it is for a clinic or individual consumer to choose between competing vaccine providers. Given their centrally planned, fixed revenue, it is only logical that Novartis missed deadlines and undersupplied the vaccine. As long as they don't underperform so drastically that the DHHS rescinds their monopoly, these are ways to cut costs and increase profits.

Beyond failing to properly calculate prices, quantities, and revenues, the socialist DHHS also failed to choose the efficient method of providing the flu vaccine. The contract, according to Novartis's website, includes regulations on the facilities used for production.

Furthermore, by awarding the legal monopoly to Novartis, the DHHS mandated that the vaccine was to be produced and distributed using only Novartis's unique method of production. As we've seen all too clearly, their method is far from perfect, and it's probably not the best the market can offer.

"It is only logical that Novartis missed deadlines and undersupplied the vaccine. As long as they don't underperform so drastically that the DHHS rescinds their monopoly, these are ways to cut costs and increase profits."

On a free market for vaccinations, different firms employ different methods for the provision of the same or slightly different vaccines; this is the very reason that firms' costs vary. If allowed to compete with prices, safety, or reliability, the best production and distribution processes would quickly win the business of discriminating patients.

This would lead to higher quantities of high-quality vaccines using processes that use relatively fewer resources. While this may not seem very important for the provision of H1N1 vaccines, for more deadly epidemics the importance of competition cannot be overstated.

It should be clear from our discussion that Mises's socialist-calculation problem and Hayek's knowledge problem affect all government meddling in the economy. To destroy a market, a bureaucracy need not actually physically produce and disseminate the good in production. Any influence which uninformed, ill-equipped bureaucrats and politicians exercise over a market is sure to have disastrous effects.

This is an important principle to keep in mind when considering Obama's healthcare legislation. The prospect of central planners setting or even influencing claims levels, care-accessibility thresholds, and the distribution of medical technology ought to be enough to terrify any economically literate person.

To solve the impending shortage of immunizations, the necessary policy measures are simple:

"For more deadly epidemics the importance of competition cannot be overstated."

Novartis's legal monopoly on the production of flu vaccines should be immediately lifted, as should any and all regulations on their provision of the vaccines in the future.

The vaccines' price must be allowed to fluctuate before the shortage deprives even more people of vaccines they'd be willing to pay for at a market price, and before a risky black market for vaccines emerges to clear the market.

Most importantly of all, the titanic failure of the DHHS to provide this vaccine must be taken seriously as an omen of the horrors that the socialization or quasi-socialization of medicine and health services will bring. Central planning of medical markets ought to be categorically rejected before government fails to fight a more serious and deadly epidemic.